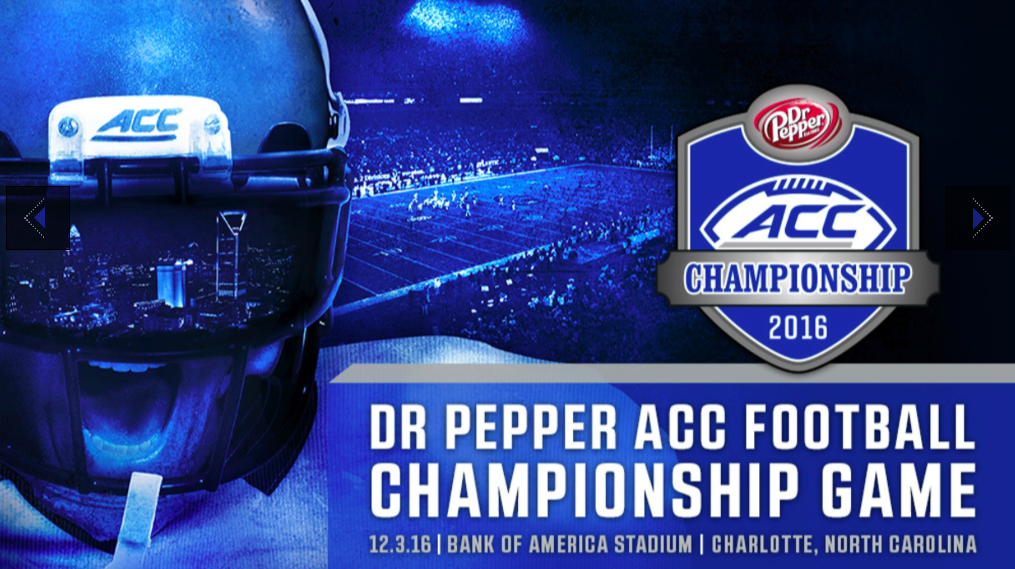 Tickets for the 2016 Dr. Pepper ACC Championship Game went on sale to the public this week and all you need to do to book your spot in Charlotte is head to the ACC website to place an order. What does your team need to do in order to join you at Bank of America stadium?

ACC media picked the Heels to repeat as Coastal champions for the first time since Virginia Tech accomplished that feat in 2011. Larry Fedora’s squad certainly has elite talent at the skill positions on the offensive side of the ball, but the entire season rests on the shoulders of Mitch Trubisky, the man responsible for replacing UNC’s heart and soul, quarterback Marquise Williams. The Tar Heel defense showed remarkable improvement in 2015, but Baylor’s dominant performance in the Russell Athletic Bowl leaves questions about the sustainability of that upward trend.

Holding serve at home is the most important task for North Carolina with key games against Pitt, Virginia Tech, Georgia Tech and North Carolina State all set for Kenan Stadium. Four wins in those games keeps the Heels at the top of the hunt, but one slip-up could make them fall behind a fellow contender who takes care of business in their home games.

The Blue Devils landed in the enviable 5th spot in media pre-season voting, the same spot where the last two Coastal champions began their title runs. Duke’s formula for recent success has been consistency and experience, and though the secondary is the only position group where veterans reign supreme, this will be the most talented roster David Cutcliffe has ever put on the field in Durham. Will that talent be ready to perform, or are they still a year away?

Because the Coastal is so deep, the likelihood of a tiebreaker deciding the champion is quite high. Duke’s November with home games against Virginia Tech and North Carolina followed by road trips to Pitt and Miami will either earn, at worst, a head-to-head tiebreaker to put Duke in Charlotte for the 2nd time in 4 years, or keep the Blue Devils at home during bowl season for the first time since 2011.

It’s not discussed often, but in the Atlantic division, it’s less about who you have on your roster and more about who Florida State and Clemson have on theirs. Dave Doeren has his Wolfpack in that 2nd tier of the division ahead of Wake Forest, Boston College and Syracuse because of a balance of talent across both sides of the ball, and he has a game breaker in Jaylen Samuels who can make plays to keep the Wolfpack in games they have no business being in otherwise.

The formula for winning the Atlantic is simple to figure out, but difficult to accomplish. For the Pack to have a chance at Charlotte, they’ll need to beat Louisville, beat North Carolina, and beat the winner of the Clemson/Florida State game. Unfortunately, Florida State is the only home game out of that group of games. Fortunately, the Pack have a coach who is a master at accepting challenges, no matter how difficult.

Dave Clawson’s team is living, breathing proof that the Atlantic can be won outside of Clemson and Florida State. The Deacs are also still the only North Carolina team to win the ACC Championship Game, and though Charlotte is essentially out of the question for Wake Forest this season, that’s a distinction that should be celebrated and rubbed in the faces of UNC, Duke and NC State fans until it’s not true anymore.

Wake can beat Boston College and Syracuse, and they’re not that far behind Virginia who is one of their two crossover games. The Deacs almost had Louisville last season, so you just never know. If Clawson can beat the teams who are on Wake Forest’s level and win the rivalry games against NC State and Duke, Wake likely still can’t reach Charlotte, but would absolutely be bowl bound … a feat that Duke and NC State both may struggle to accomplish this season.