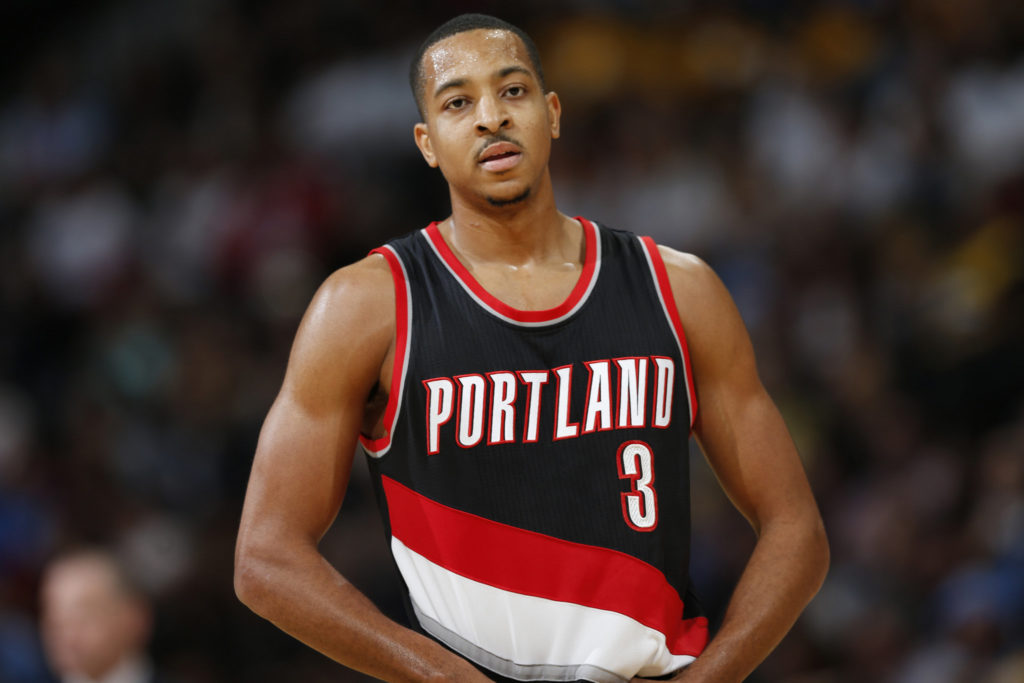 The Charlotte Hornets continue to play good basketball late in the season. Charlotte went 9-7 in the month of March, and ripped off recent comeback victories over Toronto and Denver. The starting five continues to be among the NBA’s best lineups. However, FiveThirtyEight gives the Hornets a mere five percent chance of making the playoffs.

In part 2 of our Breaking Buzz series, we exam another player/team for Hornets fans to watch if Charlotte misses out of the playoffs: C.J. McCollum and the Portland Trail Blazers. (Note: If you missed part 1, here’s our look at John Wall and the Wizards.)

Blast from the past

The first time the majority of folks on Tobacco Road heard of C.J. McCollum it occurred in a rare dark moment for Duke basketball. Back in the 2012 NCAA Tournament in Greensboro (remember when we got to host those fun events in NC?), 2 seed Duke took on 15 seed Lehigh.

McCollum lit the Blue Devils up for 30 points as the Mountain Hawks pulled off the stunning upset. More importantly, it produced some of the best signage in tournament history, and a crestfallen Curry Mom.

Fast forward five years, and McCollum is putting in work like this on a nightly basis against the best defenders in the world — not just Tyler Thornton. McCollum is one of the NBA’s top No. 2 options; Portland’s alpha is Damian Lillard, who has averaged 31 points over the Blazers’ last 13 games.

Since trading for center Jusuf Nurkic and adding him to the lineup just before the All Star break, Portland has won 15 of 21 games. The Blazers have the fifth best point differential in the league since then, too, and now have a 99 percent chance of making the playoffs, accruing to FiveThirtyEight. McCollum’s dynamic offensive game has played a sizable role in this run.

McCollum is one of the NBA’s best pure shooters, and he can can hit from any location inside the gym. Here’s a look at his shot chart; this is Kevin Durant-esqure (minus the dominance at the rim). 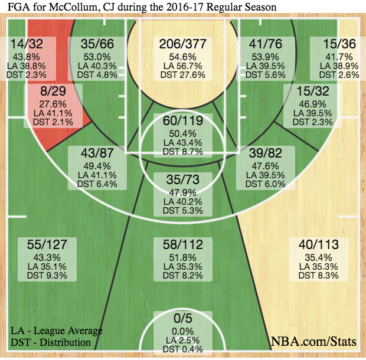 McCollum is comfortable to bomb three-pointers. He attempts close to six triples per game, and has connected on a career-best 42.7 percent of them. However, he is happy to cook from inside the arc. McCollum has connected on 49 percent of his shoots from between 10-19 feet. The midrange game isn’t dead yet, y’all.

The floater is an excellent look for any player that doesn’t have the springs to dunk on every shot blocker at the rim — think T.J. Warren. McCollum weaponizes this shot better than almost anyone in the NBA. According to NBA.com, McCollum shoots 54 percent on driving floaters.

Outside of when the Golden State Warriors set fire to another arena, Portland’s offense is my favorite to watch in the NBA. These guys are a joy.

Terry Stotts, Portland’s coach, has the Blazers run his “flow” offense, which is essentially an advancement of the “blocker/mover” offense (something you will see Virginia and Notre Dame run). Portland flows into various actions — most of which start with multiple screens off the ball to free up perimeter players. As one wing runs off a flare screen, the other zips up a pindown on the opposite side of the floor.

This sort of circle motion set is gorgeous to watch, and it’s wildly challenging to defend. Overplays and switches can be countered with back cuts. It also clears out the middle of the floor and gets natural weak-side defender out of natural help positions.

According to the league’s tracking data, McCollum has connected on 41.8 percent of his catch-and-shoot threes this season. He ranks 15th in the NBA in three-point percentage after taking zero dribbles before shooting a three-pointer. Watch him zipper up, then fly off a flare screen from Noah Vonleh — a classic Portland look.

NBA teams love running dribble handoff (DHO) action, and the Blazers are one of the biggest proponents. Six percent of Portland’s possessions are used via a DHO — No. 4 in the NBA. McCollum is sixth in the league in points per possession on handoffs: 1.13. He shoots 52.1 percent on these possessions, which leads the NBA. That’s silky.

With Nurkic in the fold, Portland has been able to open some new action, too. Mason Plumlee, who was sent to Denver in the deal for Nurkic, is an excellent passer, but he got a lot of his dimes in the pick-and-roll — making 4-on-3 reads after Lillard dumped the ball to him. Nurkic can do that as well, but he is damn good at operating in the pinch post or foul line extended area and looking for cutters.

Portland can run split action, and with all of its perimeter talent, that can be death for a defense. McCollum is shooting 62.3 percent following a pass from Nurkic (66.7 percent from beyond the arc). He is also shooting 70.3 percent as a cutter this season, scoring a ridiculous 1.32 points per possession.

Unfortunately for Portland, Nurkic suffered an injury in the win over Houston on Thusday this week. He will be out for the rest of the regular season.

Not just a supporting actor

Stotts is one of the best in the NBA, and for the last two seasons — as the Blazers have built around its brilliant two-headed backcourt — Portland’s coach has staggered the minutes of his best players. Stotts makes sure that Portland is never without at least one of Lillard or McCollum on the floor at all times. Both guard average around 36 minutes per game; they play together for 24 of those minutes, and then spend the additional 12 as a solo act — around six minutes per half.

Playing alongside Lillard, McCollum works primarily off the ball. However, when he is the lead guard, McCollum is more than capable of keeping the ship afloat. Over the last 21 games, Portland has scored a league average rate in this scenario: nearly 106 points per 100 possessions.

When Lillard sits and McCollum runs the show, Portland’s assist rate drops, which isn’t surprising. On the plus side, though, McCollum ranks 14th in the NBA in effective field goal rate — 48.7 percent — when shooting off of pick-and-rolls. This ranks directly behind Lillard and Kemba Walker. He turns the ball over on just 11.6 percent of these possessions, too.

McCollum is savvy enough to snake back after a ball screen in an effort to create space for a shot. Watch what he does to poor Devin Harris here.

Portland’s star combo guard will never be confused for a stopper, but he isn’t exactly a sieve on defense. McCollum is also a clever shot-block artists, thanks mostly to his wingspan. The fourth-year guard is on pace to become the 44th player in league history 6-4 or shorter to record a block rate above one percent.

Barring a collapse by Memphis, Portland is locked to the No. 8 seed. This will likely set up a first round series with the Warriors. Yikes. Regardless of how this one plays out, it will be eye-pleasing basketball that includes a ton of highlight-inducing, pass-happy offense.

Nurkic’s injury puts the Blazers in a tough spot; the team has shut him down for the regular season, but hopes he can return for the postseason. Portland, with or without Nurkic, will be heavy underdogs against Golden State. Winning a game would likely be an accomplishment; so watch this team while you can.