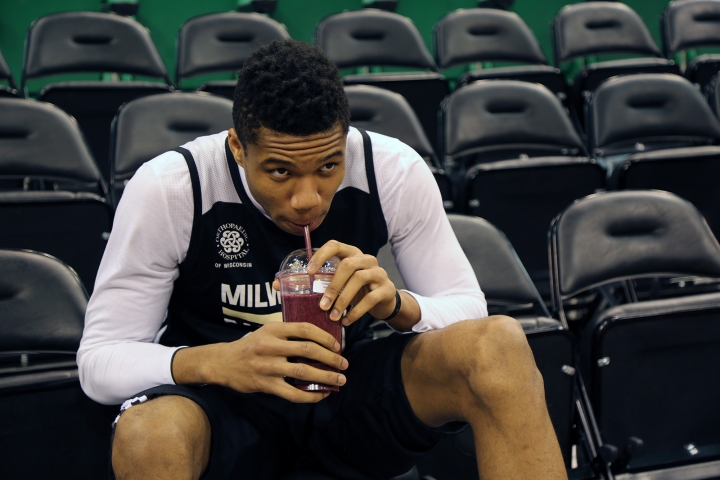 The Charlotte Hornets dropped consecutive must-win games against Washington, Miami, and Boston, which eliminated the team from the 2017 playoffs. Not great, Bob. This is legitimately a bummer, and there’s plenty to unpack, so stay tuned; we’ll mourn a season of what could’ve been in the near future; first, however, we need to look ahead to the playoffs. It’s part 3 of our Breaking Buzz series. Today, we feature the Milwaukee Bucks, and alien cartoon character Giannis Antetokounmpo.

For several years now, we’ve marveled at the burgeoning talent of Antetokounmpo. This isn’t the first time Giannis has led this team to the playoffs, but the 22-year-old is just starting to arrive at how to unlock his powers. The Bucks — led by Giannis — are comically long, and a crew that no one wants to run up against in the playoffs.

Giannis leads the Bucks in all five primary box score statistics: points (23.1), rebounds (8.7), assists (5.4), blocks (1.9) and steals (1.7). Antetokounmpo is poised to become just the fifth player in NBA history to lead his team to the playoffs and all five major statistics. Giannis will be there first player in league history to finish in the top 20 in total points, assists, steals and blocks. Yo! Plus, he can do this:

He’s the frontrunner to be named the league’s Most Improved Player, despite some outstanding competition. The Greek Freak will be named to an All-NBA roster, too. In his fourth season in the league, Giannis has become one of the NBA’s top dozen players. Five years ago, he was a complete on unknown; before that, he grew up in extreme poverty on the streets of Greece. This rise is meteoric; give this man all of the smoothies he desires.

Antetokounmpo wants to get it, and go. He’s emerged as the most frightening force in transition basketball. The court shrinks as Giannis — a never-ending combination of arms and legs — sprints with the ball to the hoop. One dribble gets him from half-court to the rim, where he’s dunking on all of your hopes and dreams. Giannis scores 6.2 points per game in transition — fifth in the NBA — on 67.5 percent shooting.

Shooting is a liability for Giannis, though. He can dominate the game without a reliable jumper, but once he adds that, look out. Antetokounmpo has connected on just 27.3 percent of his three-pointers. He’s shoots just 35.5 percent from 15-19 feet, and you can see from his shot chart that the pull-up midrange area is mostly a dead zone for the Freak.

He’s compensated for this by becoming an expert facilitator. When he’s on the floor, Giannis assists on 26.3 percent of his teammates’ made field goals. The Bucks rank 11th in the NBA in three-point percentage — 36.8 percent — and Antetokounmpo plays a tremendous role in that. Tony Snell, saved from the dregs of a bizarro Chicago roster, has been revitalized as a potent 3-and-D option. Snell shoots 43.4 percent from distance after a pass from Giannis; Jason Terry and Khris Middleton both shoot above 42 percent from beyond the arc in this paradigm. There isn’t one player in Milwaukee’s rotation that shoots below 34 percent on triples after a pass from Antetokounmpo. Insane.

Giannis draws a crowd when penetrating through the lane — defenses bend in his direction. When this happens, he whips clever passes to Milwaukee’s perimeter snipers, or looks for a cutter. This is where Jabari is missed, too. Watch these two make mincemeat of Rudy Gobert and Utah.

And again, this team against Miami.

Milwaukee hasn’t been just a one-man show, though. One of the surprise contributors this season has been the likely Rookie of the Year: Malcolm Brogdon — aka, The President. Brogdon, a 24-year-old rookie, has brought his rugged defense to the Midwest; his offense, however, has been a real boon for the Bucks, too.

The UVA product is shooting above 40 percent on three-pointers on nearly six attempts per game. The Bucks rank No. 13 in the NBA in offensive efficiency. However, when Brogdon is on the floor, Milwaukee scores at the equivalent of a top six offense in the league: 1.09 points per possession.

Working well with others

Brogdon turns the ball over a little too much in the pick-and-roll, but he’s shot a decent clip from this action. Milwaukee has wisely surrounded Giannis with dudes that can bomb off the catch; Brogdon is no exception here. According to the league’s data, Brogdon has splashed 43.2 percent of his catch-and-shoot threes. He’s made 44 percent of his field goals following a pass from the Greek Freak. Conversely, Antetokounmpo has 57.2 percent of his two-point field goals after a pass from Brogdon.

He’s formed a tight bond with Greg Monroe — who is celebrating a strong second half to this season. Monroe has 62 percent from the field after a pass from Brogdon.

Brogdon, however, is more than just a spot-up shooter and savvy passer. The former All-ACC wing has flashed the kind of athleticism that makes you wish Tony Bennett had let him go a little more while in Charlottesville, especially when he was teamed up with Justin Anderson.

Ships crossing in the night

After a strong sophomore year in the NBA, Jabari Parker was enjoying a borderline All-Star season in 16-17 with Milwaukee. Unfortunately for Jabari, the powerful forward tore his left ACL in February — the same knee he ripped up during his rookie season. As luck would have it, Parker went down in the same game that Khris Middleton — Milwaukee’s two-way stalwart — returned from a hamstring injury. It was Middleton’s first game of the season.

It was a tremendous bummer to see Parker exit the lineup, but Middleton has been a stabilizing force. He can check multiple positions, run a pick-and-roll and splash triples. Middleton has connected on 41.8 percent of his three-pointers this season. The Bucks are nearly 10 points per 100 possessions better with Middleton on the court this year — a rather impressive note.

Get well soon, Jabari. Giannis and Parker formed the league’s most dynamic two-man fast break combination: Jabari scored 1.3 points per possession in transition — on 69.5 percent shooting. We need more of this in our lives.

Milwaukee will enter the playoffs at either the No. 5 or No. 6 seed in the East, which means they will matchup with either Atlanta or Washington. The Bucks will not have home court, and if they play the Wizards, Milwaukee will certainly be the underdog. However, no team wants to see this army of long-limbed three-point bombers lined up across from them. If it’s Atlanta and Milwaukee in round one, I’d bet good money on the Bucks spring the upset.

John Wall and the Washington Wizards