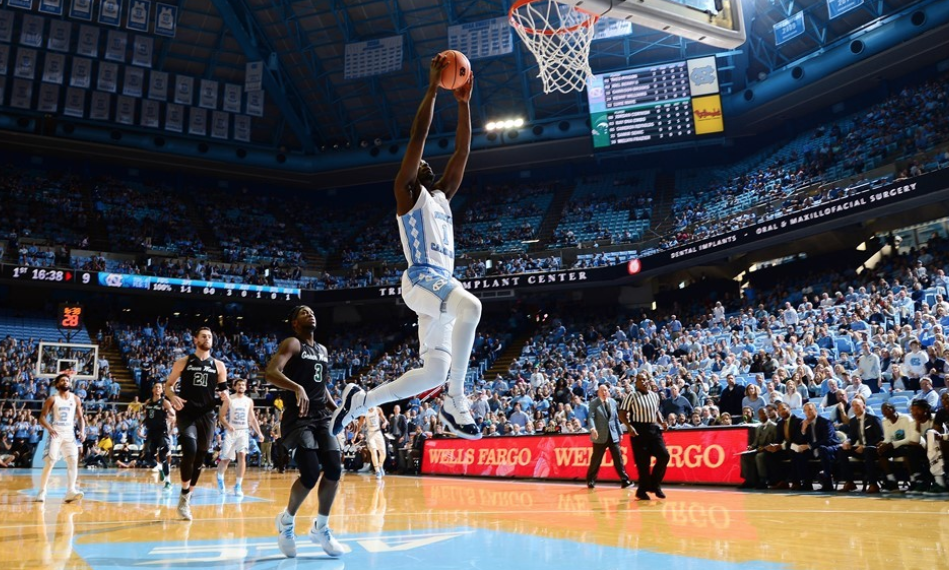 8 Things From UNC’s Win Over Tulane

CHAPEL HILL — As probably the least-talented opponent that North Carolina has faced this season, Tulane (6–25 last season) gave the Tar Heels a chance at an easy victory. They pounced on that opportunity early on the way to a 97–73 win Sunday afternoon in UNC’s third game in five days.

Tar Heels get defensive from start

The UNC coaches show clips of the best plays from each game to the players, and Coach Roy Williams noted there were no defensive possessions in those clips for the last two games. He said he couldn’t ever remember that happening.

Intent on changing that, one of the three things Williams put on the dry-erase board before the game was, “make this our best defensive game.”

“That’s the challenge we had today and I think we did a good job of coming out and executing on the defensive end,” said Joel Berry, who collected 13 points and three assists.

More importantly for the players, their coach agreed.

“I think we got our guys’ attention when we talked to them about playing better defense,” Williams said. “I thought we were more active.”

Never satisfied, though, he sees plenty of improvement needed on that end of the court.

“I think the one thing that we still have to do is guard the ball better so we don’t have to help with these guys’ open 3s. If a guy is a 3-point shooter, we’ve got to get up closer to him and make that a problem for him. Make him put the ball on the floor,” said Williams after Tulane made 10 of 27 3-point attempts.

Smooth Kenny keeps getting it done

From off-balance driving moves to the basket to drawing his team-high ninth charge call, Kenny Williams is playing so well that Coach Roy Williams will have some tough lineup decisions to make when Cam Johnson finally makes his UNC debut in a regular-season game.

Could Johnson be forced to debut as a sixth man? The impact may also come with the 6-8 Johnson taking minutes away from the young big men in games where small ball is advantageous, playing a wing spot.

Since last season, Kenny Williams’ 3-point shot has been there, and he’s been consistent from the perimeter this season. But he’s proving to be an all-around force for UNC on both ends and a hustling player who doesn’t mind a getting a few floor burns along the way.

“Oh, man, that was a fun game. We were locked in from the very beginning,” said Kenny Williams, who scored 13 points (all in the first half) and pulled down six rebounds.

“Kenny just does a great job,” Coach Williams said. “Works defensively. He’s not perfect, but boy, he does a lot of good things defensively.”

He got his offense in a variety of ways. He’s swished in a medium-range jumper with a quick release after a pump-fake. And then there was the coast-to-coast drive for the beat-the-buzzer layup after pressing his “turbo button” at the end of the first half.

But what about the trend of great offense in the first half with that punch disappearing in the second half?

“I’m not really one to force anything, so if the shot is there, I’m going to take it and they are usually there in the first half,” he said. “I can’t really explain to you why the same shots aren’t there in the second half or whatever the case may be. I guess I need to make a couple before teams start coming out on me. I just take what the defense gives me.”

It’s no secret that playing defense is more difficult when an offense moves the ball quickly and smartly. North Carolina has been doing that better in recent games, but never more effectively than against an overmatched Tulane team that struggled to keep up.

Berry says that movement has been a big emphasis in practice of late.

“I think we’ve done a better job of just being able to screen for people to get shots and just continuing to move,” he said. “The first couple of games of the season, we were doing a lot of standing around. I think we did a pretty good job of screening, just moving the ball. It’s hard to guard when you’re moving and setting screens.”

It made for some easy baskets and little doubt, from early in the game, that this was going to be an easy victory over the Green Wave.

“I think today we did a better job of that,” Kenny Williams said. “We didn’t have as many assists as last game but it was definitely better movement.”

It was a bit of an inside job

When you outscore your opponent 62–30 inside, you’re going to win just about every time. And those sorts of numbers are why Roy Williams prefers two big men on the court as much as possible.

Brandon Huffman played in the first half for the first time in three games and had some of his best minutes of the season. He slammed down two dunks to give him 10 on the season and put up career-highs of nine points and six rebounds.

“Those last two games were a little different because of the matchups,” Huffman said. “All the bigs we were playing could shoot 3s, so that was kind of hard for me, and Coach didn’t want to put me out there and have me be a liability.”

With no such issues against Tulane, it was satisfying for him not only to get into the game early but to contribute.

“It felt good because, as of lately, things haven’t really been going as I thought they would and sometimes the minutes are different,” Huffman said. “That’s just all part of it. I just need to keep improving. I kind of took it upon myself to make sure I’m doing everything I can to earn the coach’s trust and everything.”

Garrison Brooks, who has started every game this season, collected eight points and five rebounds, and Sterling Manley had seven points and three rebounds.

An issue for Manley that Coach Williams pointed out early in the season was fitness level. He showed at one point when he sprinted down the court on transition that he may be working through that problem.

Manley and Brooks were both in at the same time midway through the second half, with Manley holding the five spot. During that stretch, Brooks made a nice pass to Manley for an easy bucket, leading to a shout of celebration from Brooks. Huffman and Brooks also got time together.

Huffman has shown good qualities in a big man: The ability to be reliable at catching an entry pass and to keep the ball high to avoid an interior turnover. 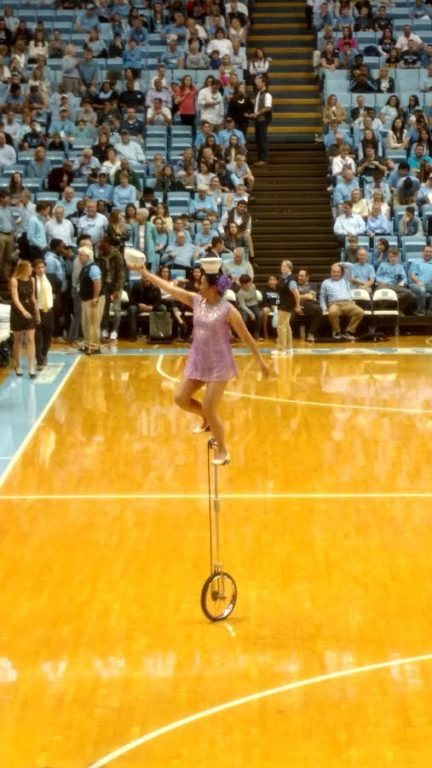 After two consecutive performances by dogs at halftime of UNC games, Tar Heels fans got the pleasure to see the worldwide phenomenon known as Red Panda, a performer so famous she has even been the subject of a SportsChannel8 song.

It was a Chapel Hill doubleheader for the Chinese woman (her real name is Rong Niu), who became famous in season eight of “America’s Got Talent” with her bowl juggling act on a unicycle while wearing pumps. Magically, numerous bowls that she tosses in the air end up resting on the top of her head. She also performed at halftime of the UNC’s women’s game later Sunday afternoon against Appalachian State.

The odd part of Red Panda’s appearances is that few people know in advance when she is going to perform, and it’s usually a pleasant halftime surprise. One would think, particularly with the women’s game, that promoting her appearance would attract a few more fans for a team that has trouble drawing big crowds.

Here are the numbers at the men’s game Sunday: Numerous bowls juggled, including several at the same time, and zero bowls dropped. 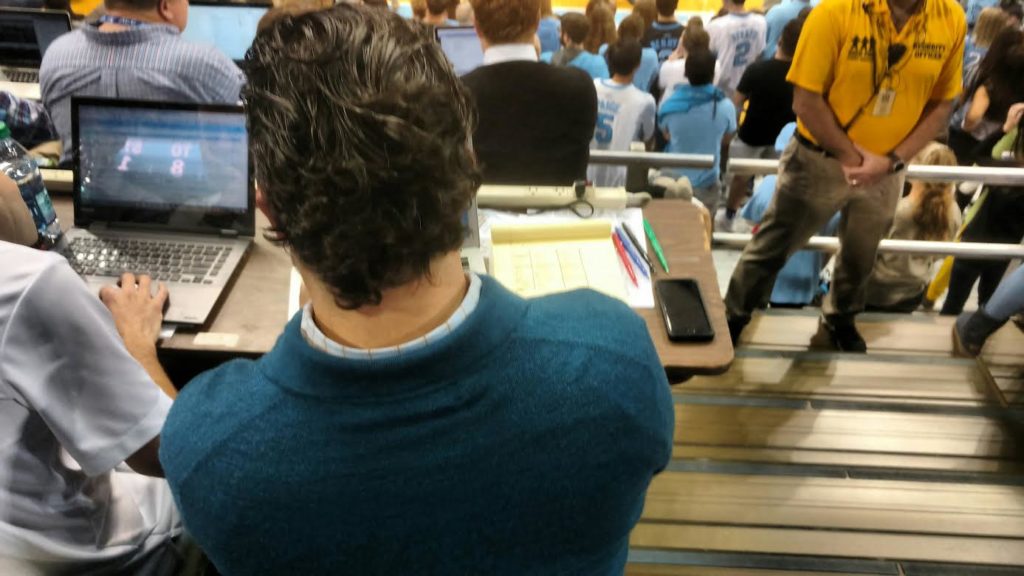 Some Giglio juggling as well

Joe Giglio, the N&O/Herald-Sun’s college football expert, was covering his first home game as the Carolina beat writer on the same afternoon that the College Football Playoff teams were determined and the bowl schedule was finalized.

That meant some juggling for him, from following the blowout of Tulane to tracking all of the other bowl destinations, including N.C. State – the  team he formerly covered – being assigned to a Sendek Bowl, err, Sun Bowl matchup with Arizona State.

And it meant the season debut in the Smith Center of the Yellow Pad, complete with pens of various colors.

Tired of a certain question

Joel Berry snapped at a tv crew for asking an “are you surprised by Luke Maye” question. Then he recalled the exchange for a group of reporters that arrived late. Most polite tantrum ever