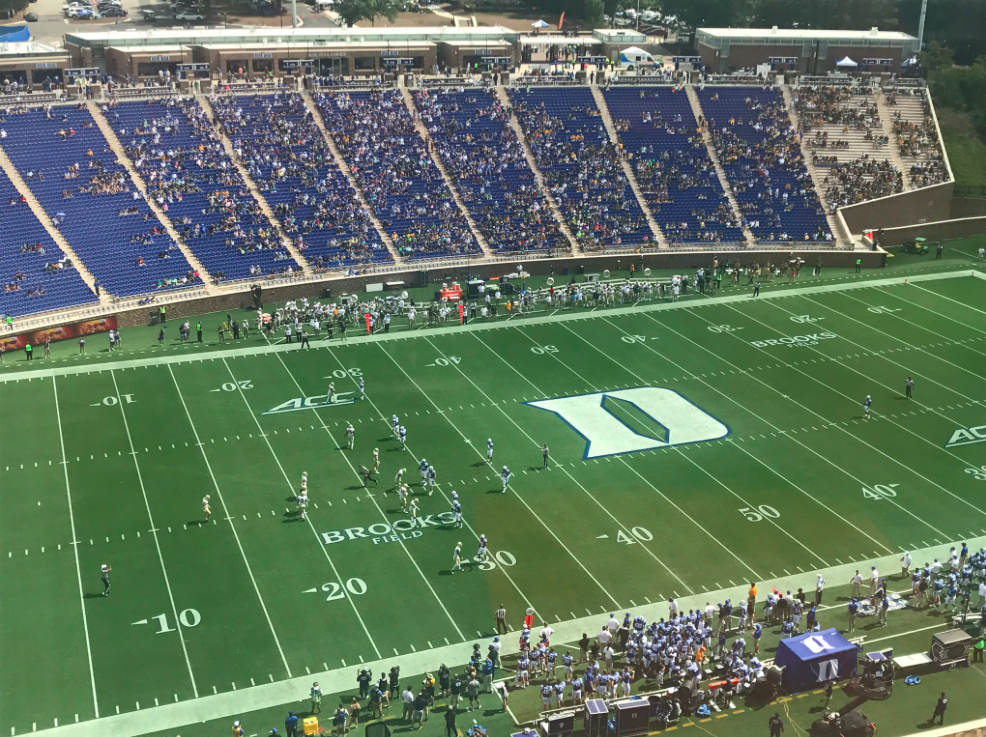 Duke is winning again which means it’s time to dust off the “why aren’t fans supporting this team” Duke football attendance discussion. With all respect to bloggers and professionals alike, no one is coming close to hitting the mark with their answer. It’s time to bust some myths.

Myth 1 – duke fans are staying home out of skepticism

When Duke isn’t good, it’s easy to look at empty stands and think “I get it. You’d be here if the team was winning.” So naturally it’s a comfortable leap to “Come on guys, support the team” when they ARE good. But it’s the wrong leap. Sure, it’s difficult for a bad or average Duke team to draw fans to the stadium, but there isn’t some huge population of ticket-holding fans sitting at home waiting to see if this is another 10-win team or not.

Yes, Duke is a very small private school that draws students from all over the world, and a good portion of those students go back out into the world after graduation. But Duke can, and has, filled the stadium.  And they’ve done it without a huge number of opposing fans. Wallace Wade Stadium is the perfect size for Duke football, and has nothing to do perceived attendance issues.

There may have only been around 15,000 Duke fans at the Baylor game on Saturday. In the 4th quarter when the Blue Devils defense took the field clinging to a 24-20 lead, every single one of them was on their feet yelling. Duke football apathy is a very real thing, but it doesn’t take the form of empty seats. It’s those same fans sitting down in those brand new blue seats, carrying on conversations about anything other than football. That didn’t happen against Baylor, and Duke’s defense responded with a pick six to put the game away. The fans are plenty into this team.

So if it’s none of those reasons, what is the reason for so many empty seats? There’s really no better answer other than “life”.

Fans have choices to make every Saturday. Whether it’s birthday parties, work, sleep, youth sports, etc., life doesn’t stop for football. And when you’re kicking off every game before 1PM, those choices multiply. College football is AT LEAST a 6-hour commitment when you factor in travel, parking, four hours of game time, getting out of the parking lot, and traveling back home. And that’s if you don’t tailgate. It’s a sacrifice to give up a quarter of your day, and while that’s the Saturday tradition elsewhere, it’s certainly not at Duke.

There’s a small window in one’s life where you pretty much don’t have anything you HAVE to do. For most people, that window opens right out of college and closes right when you have kids. Based on the US average, college graduates are 22 years old, and first-time parents are 26 years old. That’s a four-year window to establish the extra “things” you do with your time that you’re not willing to give up when conflicts start popping up.

During the 13-year stretch before David Cutcliffe arrived in Durham, Duke football fans witnessed 14 home wins. 14 wins in 13 seasons. And, assuming they even went to those games, they watched those 8 wins in an outdated stadium with no amenities, no technology, terrible parking, and no tailgating. Duke wasn’t a bad program. They were the worst Division-I program in any sport, and potentially the worst power conference program in college football history. That’s four full “four-year cycles” of fans who were building those non-negotiable Saturday traditions. 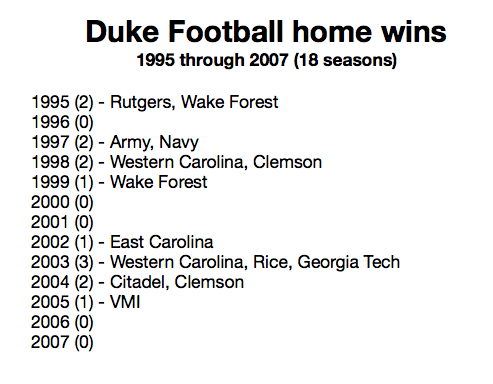 Simply put, Duke football lost an entire generation of fans. And that generation, right now, are the ones who typically tailgate with other families and make sure to schedule around football games at other programs. In Durham, those families have other commitments. They’ll show up for night games. But day games, especially in North Carolina September heat, you can forget about it.

Did a little research and (to no one’s surprise), Duke football attendance is entirely dependent on kickoff time pic.twitter.com/IZLEpXRNWc

The positives for Duke football is that they’ve now been through one full “four-year cycle” where traditions are being formed that absolutely include college football. Like most artists, David Cutcliffe probably won’t be around to witness the fruits of his labor, but there has undoubtedly been a culture change in Durham since his arrival. It might not be visible for those sitting behind a computer screen churning out questions and answers about Duke football attendance, but it’s unmistakable here in Durham. And it’s life-altering for the few that chose to stick around for all 14 wins through those historically dismal 13 seasons.