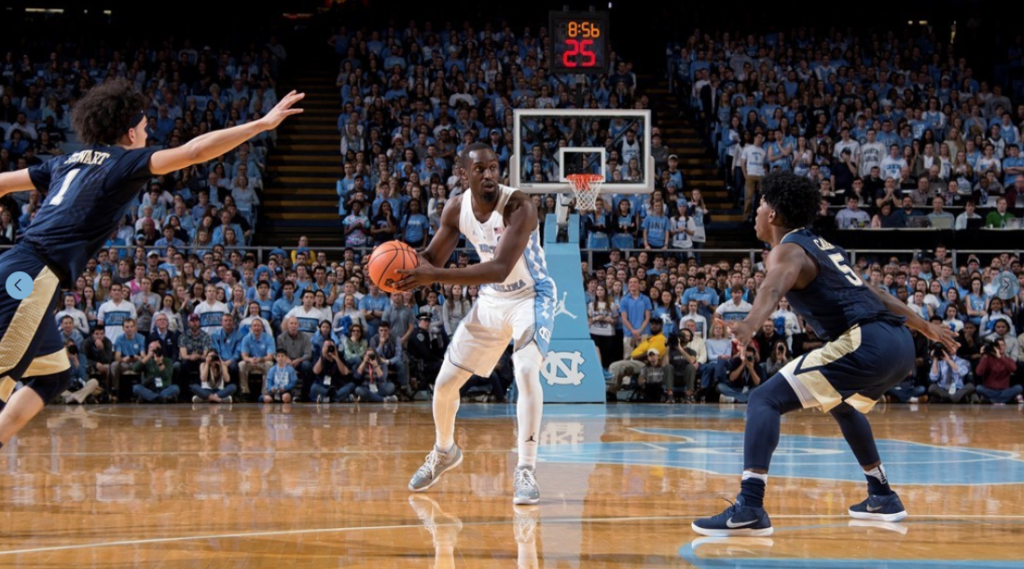 8 Things from UNC’s Win Over Pitt

CHAPEL HILL — North Carolina found the cure for a three-game losing streak Saturday night in the closest the ACC comes to an easy game, handing Pittsburgh its school-record 11th consecutive loss, 96-65. The Panthers haven’t won since Christmas, and, after pulling away late in the first half, the Tar Heels weren’t offering any belated gifts.

Not much of a reunion for Johnson

This was the first time Coach Kevin Stallings has faced Cameron Johnson since the saga of last summer. Stallings blocked the Pitt graduate from transferring to UNC before he eventually relented.

Stallings obviously doesn’t have a lot of interest in talking about the situation. For only the second time this season, he had no press availability for the Pittsburgh media ahead of Saturday’s game. When asked about Johnson after the game, Stallings said: “I don’t like to comment on other people’s players. Ask Roy about how he played. I couldn’t tell you.”

The interesting part came after the blow-by interaction between Stallings and Johnson after the game. There were two versions:

* Johnson, asked if he had any words with Stallings after the game, said, “no, I did not speak to Coach Stallings.”

Regardless of what happened in those split-seconds postgame, Johnson took the high road.

“There’s no hard feelings,” said Johnson, who collected 14 points and four assists. “If I was a coach, I probably wouldn’t want my player to leave, either. So, there’s no hard feelings on my end. I don’t think Coach Stallings was trying to punish me for doing anything. I think they were kind of sticking to their ways. I don’t have anything but respect for the University of Pittsburgh.”

As much as Johnson tried to approach this as just another game, it was hard. He grew up in Pittsburgh, his dad, Gilbert, played at Pitt, his mom, Amy, went to nursing school there and his brother still is doing research at the university. And, of course, he spent three school years on that campus.

“I tried not to look at this game any different,” Johnson said. “Obviously, you’re going to feel some things. … Obviously I have a pretty strong connection there. There is a little extra emotion there.”

There wasn’t much of a reunion in terms of players. With the turnover on the Panthers’ roster and an injury, he only played against one Pitt player who was his teammate last season.

The only current Pitt players that Johnson played with last season are seniors Jonathan Milligan and Ryan Luther, and Luther is out for the season after suffering a stress fracture in his right foot last month. Luther had led the Panthers in scoring at 12.7 points per game. Milligan is averaging only 5.1 points per game, hasn’t started since early December and was scoreless in 10 mostly garbage-time minutes Saturday.

“Yeah, that makes a difference. Just kind of knowing I put on that jersey for a pretty long time and then seeing that jersey across the way, but yeah, there was only one,” Johnson said of Milligan. “I had hosted a couple of those guys on their visits, so I know a couple of these guys decently enough.”

More than a dash of defense this time?

A staple of UNC’s press notes is a list showing the winners of the team’s defensive player-of-the-game award for each game, always updated with the winner from the last game.

For the first time in an at least a couple of years, there was a dash in the place of where the name of the winner should have gone for the loss at Clemson.

You can bet that it was pointed out by Coach Williams.

“Oh yeah,” Joel Berry II said. “Basically, if there is no defensive player of the game, you know it’s pretty much a bad game.”

The coaching staff determines the winner by grading the game tape and giving players a plus when they do what they are supposed to do on defense and a minus when they don’t. Apparently, there were a lot of minuses in the loss to the Tigers.

“I think one person was in positive, so it was bad,” Berry said.

Granted, this was Pittsburgh. But the defense looked significantly improved against the Panthers. There was the vexing high screen that the Panthers worked against UNC for a few easy buckets. But, for the most part, the Tar Heels were hustling on defense and playing much better.

“We hear it all on social media that Carolina can’t play defense,” Berry said. ”We’ve got to get better on the defensive end and we did a little better tonight so we’ve just got to keep building on it.”

Carolina had a season-high nine steals and seemed to play with more energy on defense.

More triple frustration for a half

And the made 3s from opponents just kept coming, even when it looked like Carolina’s defense was doing well defending the perimeter. There were a few drives and kick-outs that the Tar Heels didn’t defend well. But, for the most part, UNC did better with its perimeter defense.

“A lot of the threes we were giving up came from the corner and it’s hard to play that,” Berry said. “I just tried my best tonight. We can live with guys hitting twos but it’s kind of hard to stay with a team when they’re hitting a lot of threes. We did a great job of just getting out and if they did shoot it, we did a good job of getting a hand up and contesting it.”

An apparently better approach in the first half didn’t matter, as the Panthers seemed to be unbothered by highly contested 3-point attempts and made 8 of 14 attempts. That changed in the second half, when the Panthers made only two of 16 attempts.

What was different in the second half?

“We’ve been talking about the strong side, when the ball is coming your way, a lot of guys were trying to tag the roll man and that’s not their spot,” Berry said. “If the ball is coming your way, you want to get up on your man because that’s just an easy pass for a three. So, we did a little better with that. And, pretty much, that’s how we were giving up our threes — just over-helping from the wrong spots and today we did a better job of covering that.”

No strong-side help is proving to be a big help for the Tar Heels.

One field goal, but one big game

Theo Pinson does so many things for UNC that he really doesn’t have to score to have a big impact and the Pitt win was more evidence of that.

When Berry was on the bench, Pinson got the bulk of the time at point guard and did well from that spot. But he gave everybody a scare when he ran into the tunnel early in the game after colliding with another player and thought the he had hurt his shoulder. It turned out he was fine.

“I was feeling an upset stomach,” Williams said of when he also thought Pinson was hurt. “I was going to leave. He is a playmaker. He is 1 of 7 and he is one of the most important players in the game. Thirteen rebounds, eight assists and one turnover? That’s what we need him to do.”

It was the 36th time in his career and 15th time this season Pinson has led Carolina in assists.

“When we play hard and play together, we are a very dangerous team,” said Pinson said. “That’s something we lost a little bit in January, so we just needed to pick that up and we did a good job tonight.”

Pinson scored two points, making it the first time Carolina has won in three games when he has two or fewer (scoreless in brief playing time at Clemson and two against Wofford.)

But they have no backup point guard… pic.twitter.com/Kx8khw9AQ4

About the only positive part of the brutal stretch ahead for the Tar Heels is that all three ACC games they play in five days will be in the Triangle. After the first meeting with No. 4 Duke on Thursday night at the Smith Center, UNC travels Saturday to Raleigh seeking to avenge a loss last weekend to N.C. State, then comes back to Chapel Hill to face Notre Dame on Monday night.