Editor’s note: New contributor R.L. will write regularly about media topics of interest to the sports fans of NC. He’ll also contribute to our coverage of UNC hoops. And if I know him well, he’ll probably write some stuff about running (he’s closing in on 50 career marathons). R.L. spent 27 years as a newspaper copy editor and has been a sportswriter as well. If you have tips or suggestions, hit him on twitter @RL_Bynum.

Only one question to Newton from reporter since answer ignited controversy

The national controversy surrounding the interaction between a Charlotte Observer writer, Jourdan Rodrigue, and Carolina Panthers quarterback Cam Newton has long since died down.

They’ve both gone about their business with only one interaction since then.

He answered the question, but not before smiling and condescendingly saying that, “it’s funny to hear a female talk about routes.” National headlines and condemnation followed. Then, Rodrigue tweets from years ago were dug up that included a racial slur and casually referred to racist comments. At that point, the story also became about Rodrigue.

She apologized for her tweets and, after not tweeting or writing stories for two weeks, was back on the beat Oct. 18.

Newton, who lost his Dannon sponsorship deal, apologized in a video posted on social media. But there are no indications that he has apologized directly to Rodrigue.

Since that early-October incident, she’s only asked Newton one question, an innocuous one during a press conference the week before the Nov. 26 game against the New York Jets. Newton delivered his answer without controversy.

Some wondered if Rodrigue would be able to keep her job at the newspaper, much less stay on the Panthers beat. She seems to have weathered the controversy and done well since returning. With one exception, that’s come without talking to the team’s star quarterback. He’s has routinely answered questions from Observer colleagues Joseph Person and Scott Fowler.

Wayward video in the middle of stories

One of the many features to like about The Athletic and its specialty sites such as The Fieldhouse (for college basketball) and The All-American (for college football) is that no ads or videos pop up on the site.

Readers expect ads on newspaper sites and they come up as you’re reading The N&O and The H-S. But it’s irritating when a video is placed in the middle of a story that has nothing to do with the subject matter.

There were two examples last month:

web publisher: here’s a video you don’t care about

Inserted in the middle of a story about the new contract for UNC athletics director Bubba Cunningham, under the headline “Big-win bonuses” was a video with highlights of a Washington-Seattle college soccer game. 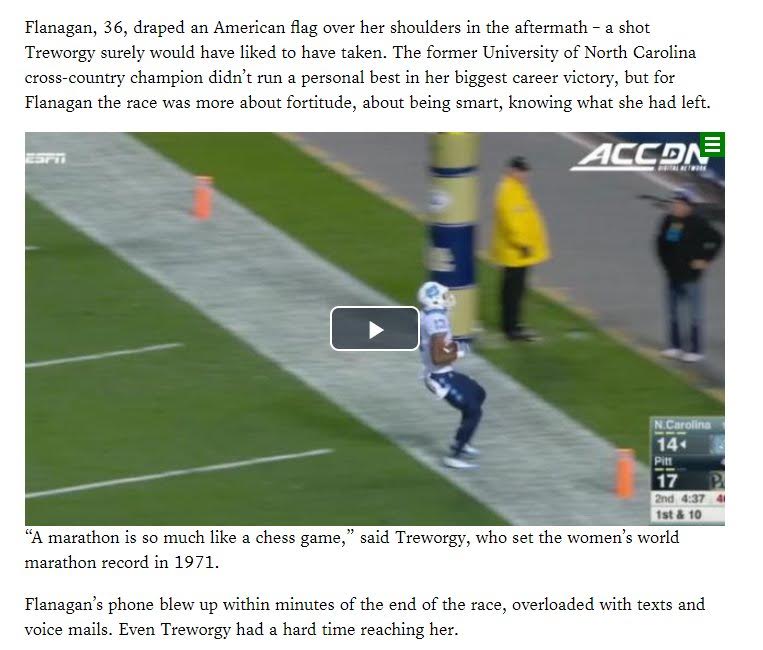 This could happen at any website for one of The McClatchy Company’s newspapers, including the Raleigh and Durham papers.

Jonathan Forsythe, McClatchy’s director of editorial video, says that the chain works with SentToNews, a third-party video provider that has rights to the NFL, MLB, NBA, NHL, PGA Tour and several college leagues, including the ACC.

“Partnering with them allows us to add sports highlights to our stories,” Forsythe said via email. “The videos are automatically placed in the bodies of our sports stories and an algorithm that reads the text of the story serves the most relevant sports video/highlight.

“As you have noticed, for some sports stories there is not a direct match, which sometimes results in a tangentially or unrelated video,” he said. “We have been in touch with SendToNews about improving the algorithm to prioritize league content first and result in fewer bad matches.”

Forsythe said that newsrooms have a workflow that allows them to simply remove a video. Those videos were removed from the Cunningham story and the Flanagan story after they were pointed out.

Technology once kept fans from listening to their favorite radio announcers and having the broadcast match what they were watching on television. But new technology has brought that ability back.

Years ago, it was easy to turn down the television sound and turn up the radio call and have the action sync perfectly. Now, the radio calls are well ahead of the TV broadcasts, particularly for Dish Network or DirecTV subscribers.

For some — depending on your tastes in color announcers — it becomes even more frustrating when Bill Walton is on the call. During North Carolina’s three PK80 Invitational games, his streams of consciousness sometimes even included insights about the game he was broadcasting. For others, Dick Vitale can be unnerving and other options are welcomed.

In the case of the Tar Heel Sports Network, it’s a dramatic change from previous years, when a free stream of games wasn’t supposed to be available. Earlier this fall, network affiliates were informed that they could now stream games. But there usually were one or two rogue stations that streamed games anyway before the change.

For fans attending games who want to listen to a live radio broadcast, in-arena feeds are offered at N.C. State games on FM 87.7 and at UNC games on FM 97.9. Those usually aren’t delayed at all but not always. Duke doesn’t offer that option for fans at the arena.

Woody Durham, the legendary former voice of the Tar Heels, is one of 10 finalists for induction into the National Sports Media Association Hall of Fame. The other finalists are James Brown of CBS, the late Skip Caray, Chris Economaki, one entry for Mike Greenberg and Mike Golic, Bryant Gumbel, Greg Gumbel, the late Dan Kelly, Tim McCarver and Fox’s Pam Oliver.

The state’s Sportswriter of the Year will be a member of the News & Observer/Herald-Sun staff since the finalists are columnist Luke DeCock and Andrew Carter, the former UNC beat writer who now works on The N&O’s investigative team focusing on sports investigative stories.

One of two candidates for Georgia Sportscaster of the Year is Elon graduate and Greensboro native Wes Durham, who is the voice of the Atlanta Falcons and does TV play-by-play of ACC football and men’s basketball games for Fox Sports.

Legendary sports writer Dave Kindred wrote an excellent 5,000-plus word feature on Lefty Driesell in The Fieldhouse, making the case that the Duke graduate and former Davidson coach deserves to be in the Naismith Memorial Hall of Fame.

Ed Hardin, the sports columnist for the News & Record of Greensboro, wrote about how Dave Doeren used a trick play right out of Dick Sheridan’s playbook to sweeten his N.C. State contract.

Jonas Pope IV wrote in The N&O/Herald-Sun about N.C. Central football player Jacen Murphy’s path, which was shaped by his brother’s guidance after an unfortunate path to prison.

Duke graduate Shaker Samman wrote for The Ringer about the glacial tempo of Virginia basketball.

Ethan Joyce of the Winston-Salem Journal wrote about how unfortunate circumstances — their battles with cancer — led to a special bond between two women’s basketball coaches: Appalachian State’s Angel Elderkin and Carolina’s Sylvia Hatchell.