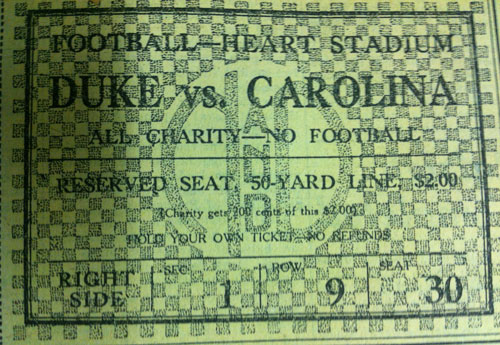 8 miles apart. Two of the most storied programs. Dean Smith. Vic Bubas. Roy Williams. Mike Krzyzewski. Countless combined championships. And none of it can touch this story about the 1930 Duke/North Carolina football game.

Duke brought its 8-1-1 record into Chapel Hill to take on Southern Conference rival North Carolina to wrap up the season needing only a tie to clinch the Big Five championship (Davidson was the 5th team – nobody cared about ECU back then either). From a re-telling of the story by UNC Library’s John Blythe, a day of rain followed by a pre-game torrential downpour made the conditions essentially unplayable and the game ended with a disappointing 0-0 result.

Fans, understandably, were unhappy with the big rivalry game ending in such an ugly score. Showing that sports fans haven’t changed much over the past 80+ years, the schools, newspapers and radio station were flooded with calls, letters and telegrams suggesting a rematch.

Due to conference rules prohibiting post-season competition, and believe it or not, due to UNC’s exam schedule, the game couldn’t be played. Instead, the News and Observer decided to promote an “All Charity, No Football” rematch between Duke and North Carolina. For $2, fans could purchase a commemorative ticket to the event with proceeds going to charity.

On December 23rd, WPTF broadcast the “game”, which was a 30-minute reading of a script giving play-by-play of the game that wasn’t really happening. Duke and UNC tied again in the “rematch”, this time 33-33, and $646 was raised for charity.