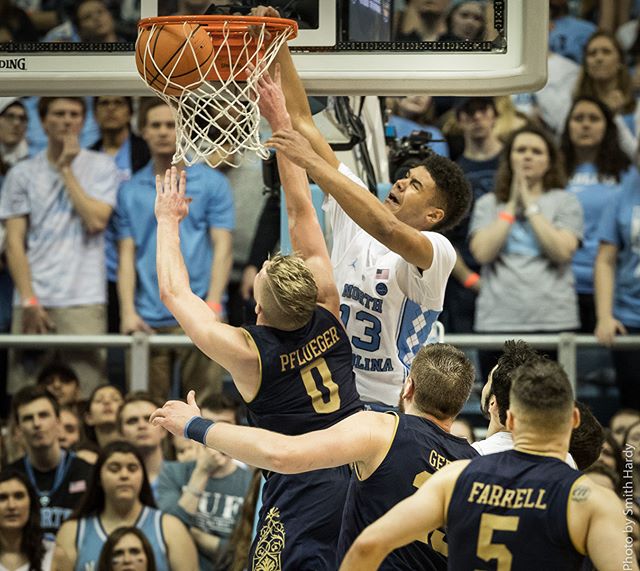 CHAPEL HILL — No. 14 North Carolina had trouble putting Notre Dame away, but a flurry of easy buckets off terrific passes in the last five minutes fueled a 13–2 run in the Tar Heels’ 83–66 victory, their fourth win in a row. The Irish went scoreless for nearly 4.5 minutes before UNC cleared the bench with 1:06 left.

UNC finished a stretch that the ACC schedule-makers didn’t lay out for any other team in the league: Play three ACC games in five days. Entering Monday’s game, it helped that Saturday’s game was played in the afternoon.

If fatigue was going to weigh on anybody, it was going to be on the starters, who played many of the 120 minutes in wins over Duke, N.C. State and Notre Dame. Joel Berry played 105 minutes in the three games, with Luke Maye in for 99, Kenny Williams and Cameron Johnson for 98 and Theo Pinson for 90.

“I honestly feel pretty good,” said Berry, who led all scorers with 21 points, his 22nd career 20-point game and ninth this season. “I’ve done a great job of keeping my body in shape and that was part of the reason I wanted to come back this year was making sure that I just do what I can and get better with stretching and learning how to recover and I’ve done a great job with that throughout this stretch. Coming out of this game, I feel pretty good.”

Berry didn’t feel so good earlier in the day and visited a dentist with a toothache. He took medication and said that the tooth didn’t even bother him during the game.

“He’s a tough little nut. He’s got a bad tooth, but he’s got a big heart,” Coach Roy Williams said. “I’d rather him have a bad tooth and a good heart.”

When Pinson was told that Berry said he was fine, Pinson was doubting that assessment.

“He’s lying,” Pinson said. “I guess he’s not battling with bigs three games in a row.”

Even though Pinson played the fewest minutes of any starter during the three games, he could feel every minute.

“I’m tired,” he said. “It’s all about will and heart. That’s the thing I wasn’t really worried about with this team with these guys playing a whole lot of minutes. You’ve got all of us playing more than 30 minutes. I won’t worry about all five of us at all because the will and heart we have. We’ve been here before. We know what it takes to win ACC games and we just want to go out the play hard.”

Kenny Williams said a lot of the credit goes to trainer Doug Halverson and strength coach Jonas Sahratian for “making sure our bodies were straight, making sure we had fresh legs and then Coach also being aware and dialing down the practices,” Kenny Williams said. “My legs really weren’t as bad as I thought they would be going into it.”

Maye was held to eight points after his career-high 33 against N.C. State and was in discussion with Halverson a couple of times during the game.

“He’s played a lot of minutes, a lot of basketball and beating up himself with a lot of guys,” Coach Williams said of Maye. “If I had to say one guy needs a rest more than anybody, I’d probably say Luke.”

Going up against Notre Dame’s Matt Ferrell, who was hurt and didn’t play in UNC’s win at South Bend, led to justifiable concerns. Ferrell came into the game leading the ACC in 3-point field goals per game at 3.1 after scoring a career-high 28 points in Saturday’s win over Florida State.

If you knew that Farrell would miss his first eight 3-point attempts and go 1 for 12 for the game, you would figure the night was a defensive success for the Tar Heels.

But you couldn’t figure on John Mooney making a career-high five 3-pointers by halftime and finishing with 6 for 6 for the game.

Berry was disappointed with Mooney’s success. But since Farrell was his defensive assignment, he was happy with the way that went.

“My job was to just do the best I can, just trying to make it uncomfortable for him,” Berry said of Farrell, who was getting some solid screens from Martinas Geben. “I was trying to do my best to get over the screen and try to chase Farrell. Our guys also did a good job of making sure that we knew where he was on the court at all times.”

Berry said big credit for the Tar Heels’ four-game win streak goes to the improvement of their perimeter defense.

“Even though we gave up a couple to just one guy tonight, I think we’ve done a great job of just making sure that we’re getting out to the 3-point line and guarding it,” Berry said. “I honestly think that’s the reason for our success.”

The next defensive challenge for UNC to conquer: High ball screens, which led to several easy Notre Dame buckets.

For the third consecutive game, Roy Williams didn’t call a timeout. Many criticized him for not calling a timeout — which would have been the use-it-or-lose-it first-half timeout — during N.C. State’s 19–0 first-half run.

Coincidentally, this was the comic strip “F Minus” seen in the News & Observer and online yesterday:

Coach Williams has said that this may be the best shooting team he’s ever had. That depth has been needed at many points in the season since only one or two of the Tar Heels’ best shooters — Johnson, Berry, Kenny Williams and Maye — have found the range in certain games.

It looked like UNC was breaking out of that pattern when Johnson, Berry and Williams were 29 of 68 the three games before the rematch with N.C. State. But it has returned.

Against the Wolfpack, only Maye and Williams made at least two 3-pointers. Against Notre Dame, multiple 3s only came from Williams and Berry.

Mike Brey just spent that entire free throw yelling at one ref, then as that guy walked away, he looked to another ref & made a gesture like "where'd you get this guy?"

After playing three games in five days, the Tar Heels get a well-earned break. They have four days of rest before heading to Louisville for an 8:15 p.m. game Saturday night. This is a huge game in terms of ACC Tournament seedings because the Tar Heels are tied in the loss column with Louisville, Miami and Virginia Tech in the battle for the No. 4 seed and the last double-bye. Since this is the only regular-season meeting, the winner will have the head-to-head tiebreaker. The Cardinals will be well-rested because this will be their first game since blowing out Pittsburgh 94-60 on Sunday.