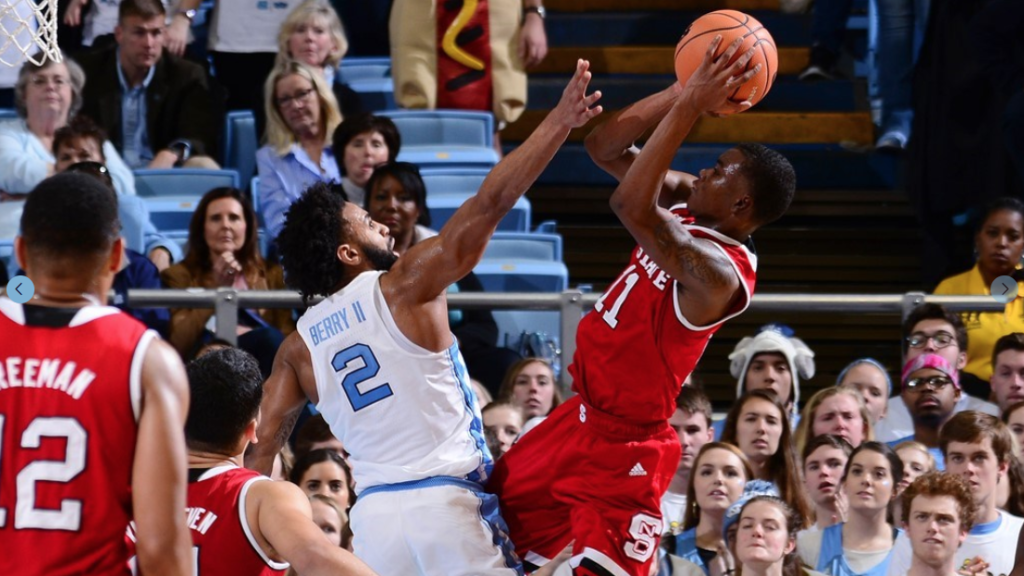 CHAPEL HILL — N.C. State got a huge win for its NCAA tournament resume by making 15 3-pointers and hitting numerous clutch shots on its way to a 95-91 overtime victory Saturday at the Smith Center over No. 10 North Carolina.

The Tar Heels’ second consecutive loss came in large part because of two statistical categories. The Wolfpack outscored UNC from 3-point range 45-12 and Carolina made only 11 of 20 free-throw attempts.

With every game, it’s becoming apparent that Carolina’s success this season will depend heavily on Theo Pinson’s success. That was only reinforced Saturday, particularly when Joel Berry II and Kenny Williams struggled to score.

Pinson’s 22 points and 15 rebounds (both career highs), weren’t enough on a day that Berry was held to a season-low six points and Williams was scoreless until scoring four in the last 2:37 of regulation. That was the case even with Luke Maye scoring 31 points, as Berry went without a 3-pointer for the first time since the win over Arkansas on Nov. 24.

Cameron Johnson scored 12 points, had six assists and made two big free throws at the end of regulation. But he missed all four 3-point attempts after throwing up for the past few days.

“I’ve been sick a little bit but that’s no excuse for anything,” Johnson said.

The killer for UNC in overtime was collecting more turnovers (five) than field goals (two).

“We don’t have time to have a pity party. We’ve got to get ready for Tuesday at Clemson,” Pinson said.

Pinson did fling up one 3-point attempt (which he missed), but he was in attack mode offensively for most of the game.

“I just need to be more aggressive. Last game, I wasn’t aggressive at all, just looking to pass all of the time and not being a threat on the court,” said Pinson, who scored four points in Monday’s loss at Virginia Tech. “I wanted to be a threat and take what the defense gave me and just try to go out and play hard. Once I found a gap, I tried to take it and go and that was the bottom line, really.”

Pinson put together his second double-double in three games, scoring five consecutive UNC field goals midway through the second half. Two of Pinson’s second-half baskets came by way of having his shot goaltended.

All those numbers are fine, but there were others that frustrated Pinson.

“I like to get my teammates involved and get them going also. One assist, four turnovers is terrible,” said Pinson, adding that it was easy to respond to the challenge when Coach Roy Williams questioned the team’s effort against the Hokies.

“If you don’t, you’re not a basketball player,” said Pinson, who made 10 of 16 shots from the floor, both career-high numbers. “We watched it. It was terrible. We didn’t show any effort. Didn’t play hard and we went out there and tried to do our best.”

The Tar Heels are 2-4 when Pinson scores fewer than six points, and this was only the second loss this season when he’s scored six or more. The other one was when he scored 16 points in a blowout loss against Michigan State.

Pinson made numerous big plays in addition to his points. He had a big block before the under-8 second-half timeout and a key steal with 2:13 left in regulation and hit two big free throws to start the overtime. He sat out for 3:15 of the second half after picking up his fourth foul, then played the last 8:30 of the game (including overtime) without fouling.

“I thought he was sensational. If he hadn’t been in foul trouble, he probably would have done even more,” Coach Williams said, pointing out the opportunities that were there with Pack center Omer Yurtseven having to come out to the perimeter to guard Luke Maye. “He’s got to go out and play him and that opens up the lane a little bit. And Theo, I thought, did a great job of driving to the basket. I was more pleased by how active he was because in the Virginia Tech game he was walking around and wasn’t very active.”

Much of the season, the Tar Heels have tried to find balance by getting more two-point field goals and not as many 3-pointers. With struggles from the perimeter, (4 of 19 from 3-point range) they had the opposite problem Saturday.

The players who really started building Dean Smith’s legacy were back in the arena named in the coach’s honor on Saturday. 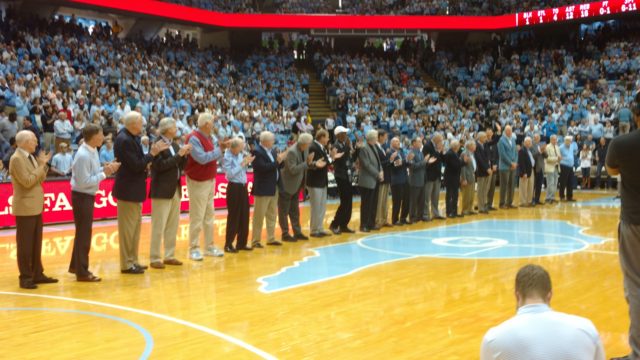 Honored at halftime were Carolina players and coaches from only teams in ACC history to win the league’s regular-season and tournament titles in three consecutive seasons, from 1967-69. Among the players on hand were who played on some or all three of those teams were Larry Miller, Bob Lewis, Rusty Clark, Charlie Scott, Doug Moe, Dick Grubar and Larry Brown (an assistant coach).

That group never won a national championship but, then again, nobody beside UCLA did in those years in the middle of the Bruins’ dynasty.

You thought that UNC went small with its starting lineup? That was nothing compared to what fans saw a few minutes before the game started: babies crawling a short distance on the floor in a race.

No, it wasn’t just a Dick Vitale catch phrase. They were really diaper dandies, baby.

There was plenty of reason for the parents to cheer hard. The race was the NC 529 Diapers to Dorms Dash, with the winner taking home $529 for the baby’s N.C. 529 college savings account. Every baby earned $25 for their accounts.

Saturday was a huge day of Triangle games, with the UNC-State game at noon and the Virginia-Duke battle of top-five teams at 2 p.m. That led to a few media members to pull off the impossible task of covering both games. 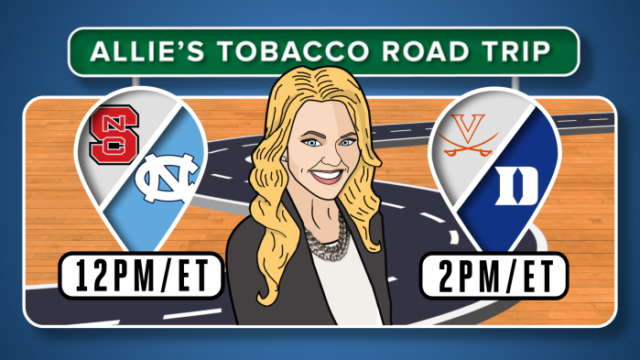 The biggest challenge was for CBS sideline reporter Allie LaForce. With CBS broadcasting both games, she reported for both contests. She added content to the CBS Instagram account, including a visit to Krzyzewskiville on Friday night.

With about 8.5 minutes left in the UNC game, LaForce said on the air that she was “taking off shortly.” During coverage of Duke’s game, CBS played the below video of her trip.

She wasn’t the only one who didn’t want to choose games. WCMC (99.9 the Fan) afternoon-drive host Joe Ovies and WRALSportsFan.com’s Lauren Brownlow also took in both games. They left the Smith Center at the 10-minute mark of the second half. Longtime Triangle sportswriter Barry Jacobs did the double but left Chapel Hill at halftime. The News & Observer’s Luke DeCock was also spotted in the post-game coaches’ press conferences wearing two media credentials after starting the day in Chapel Hill.

Shawn Krest outdid all of the others: After covering both basketball games, the first for Carolina Blue and the second for North State Journal, he went to cover a fight. He was there to see Wilmington’s Derek Brunson, who was part of the nationally televised UFC Fight Night Charlotte. Krest, who covered the 9:30 fight for NSJ, left the UNC game at the first TV timeout of the second half.

It was a large press contingent at the Smith Center. For only the second time in the arena’s history, several media members were sitting at the new table in the upper arena.

This is who North Carolina is. A mediocre team that struggles to defend and cannot win consistently without making threes.

Clemson gave Carolina a good run but couldn’t end its 0-for streak in Chapel Hill. Fourteen days later, you would figure that a rematch at Littlejohn Coliseum might be in the Tigers’ favor. But between the two games, Donte Grantham suffered a college-career-ending torn ACL. The Tigers clearly missed Grantham’s 14.2 points and 6.9 rebounds per game in their only game since his injury: a 61-36 blowout loss at Virginia. The Tigers will have a tight turnaround: they play at Georgia Tech on Sunday night before their Tuesday home game against UNC. The Wolfpack takes a two-game win streak into next Saturday’s home game against Notre Dame.