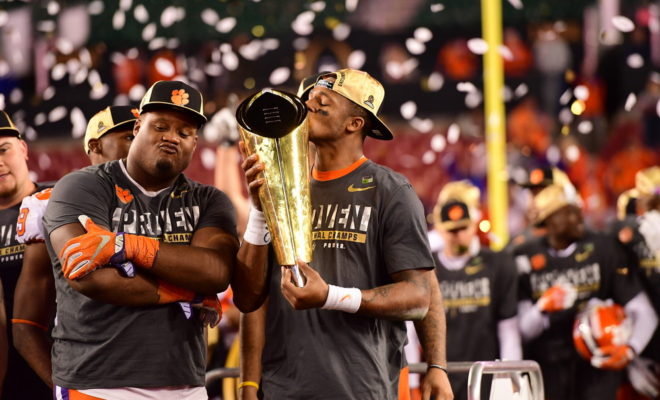 Before we get to the ACC bowl projections, here’s a quick look at the tie-ins for this season:

First Tier (in no order)

Second Tier (in no order)

The Eagles are leaps and bounds better than they were two years ago, but the Atlantic division is just too tough to break through with 6 wins.

The ACC will have one team in the playoff, but Clemson will drop that 2nd game somewhere in the Atlantic schedule to keep us from getting two.

The Noles could be a two-loss team, but with that schedule and an ACC championship, the committee can’t keep them out.

Louisville has by far the best player in the conference, but they have the 4th best team in the Atlantic.

The College Football Playoff talk is fun, but the Pack doesn’t have the team to keep pace with that dream. The 3rd best roster in the Atlantic will be too good to pass up for the Camping World Bowl.

Six wins and a name that doesn’t carry much excitement among bowl reps gets you a trip to Detroit. But Syracuse is on the come up.

Prepare for the “5-7 teams shouldn’t make bowl games” hot takes, but a 5-7 Wake team would beat a lot of 6 or 7 win teams. And back to back bowls for the Deacs is something to be proud of.

We believe this to be the first published bowl projection that includes the Blue Devils, but Duke will either be playing in Charlotte in the ACC Championship Game or in the Belk Bowl, depending on which side of the Coastal tie-breaker they fall.

The Jackets will both win and lose games they’re not supposed to en route to Shreveport, but nobody will be complaining about back-to-back wins against the SEC to end the season.

We’re not convinced of Miami’s back-ness until we see it with our own eyes. They’ll have a good enough record for the Camping World Bowl, but they’d rather sell tickets to State fans than have empty seats.

7-5 sounds about right for the Heels, and it would be tough for Charlotte to pass on UNC for a 2nd straight year, but hands will be tied by selection rules that somewhat protect order of finish.

This is our shocking pick, not because we HAVE to have one, but because Pitt’s schedule is brutal. They’ll be a talented team with a good coach sitting at home because of two non-conference games against top 10 teams and two crossover games against teams that are better than they are. This season could go south quickly for the Panthers.

Here’s a hot take – the only reason Virginia Tech is getting preseason buzz is because they’re the least controversial foil to the rash of “The U is back” takes.

*whispers* “Last year wasn’t a fluke. The team isn’t great and no one amplifies problems like Brian Kelly”