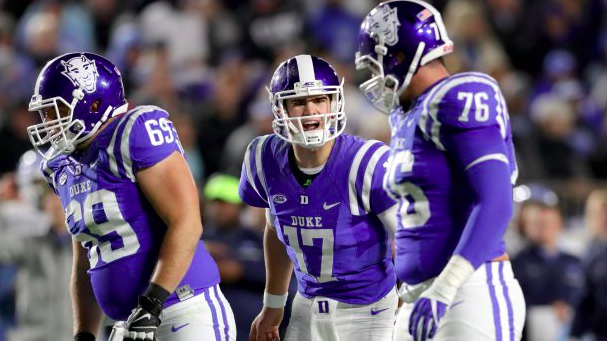 Duke football? Well, sort of. But the answer is trending more towards “hell yes” than it was earlier this season. The biggest negative from Thursday night’s 28-27 win over North Carolina was that another slow start put them in a hole early. Duke has been flat to start most games this season, and for the third time they found themselves behind 14-0 in the first quarter (although they’re 2-1 in those games, go figure). But on the positive side, a close win, especially in a rivalry game, is something a young team can build on. Prior to the Miami “Headphone Bling” game last year, Duke was 14-3 in ACC games with an overall average margin of victory of 10 points per game. Starting with that loss, Duke was 1-9 in ACC games with an overall average margin of defeat of 11 points per game. It’s probably too late for Duke to salvage much from this season, but if the Blue Devils can turn their fortune around in close games again, the near future should be pretty fun.

Most of the talk from the Tar Heel media following Thursday’s loss was around the absence of focus or preparation for the Duke game, but it goes beyond that. Aside from a beautifully designed play that went for a 54-yard Carl Tucker touchdown, Duke was able to hold UNC to their third lowest point total of the season – excuse me – 2nd, since we’re not counting the Hurricane game. On more than one occasion, a Tar Heel drive stalled because Duke blew up a completely unnecessary gadget play. There were, again, more questions about the usage of Elijah Hood. The middle of Gene Chizek’s defense was non-existent as the Blue Devils rushed for 227 yards and added another 240 yards through a healthy dose of crossing routes, seam routes and check downs. Focus and intensity help, but football is exclusively won and lost with game plans and talent. UNC had no plan to exploit Duke’s weaknesses, and aside from the kicking game and Mitch Trubisky, who is clearly a special quarterback, player-for-player, there was no noticeable separation of talent between UNC and their Duke counterparts. Fedora’s staff deserves the criticism they’re getting, but the talk of “focus” is covering up some real issues with UNC football that continue to keep them from getting over the hump.

First, it was Virginia Tech. Then it was Washington. Then Louisville. Then Michigan. The Tar Heels got the absolute best possible outcomes from Saturday, and the Orange Bowl, yes the Orange Bowl, is back in play. Hear me out … Clemson and Louisville win out, and Ohio State beats Michigan. If that happens, there’s a SOLID chance that Clemson and Louisville join Ohio State and Alabama in the college football playoff. So who goes to the Orange Bowl? The next ACC team in line, which would be the Coastal champion. The Heels would have to beat NC State, and Virginia Tech would have to lose to Virginia, but those necessary outcomes aren’t all that far-fetched. Really, only the Virginia Tech outcome would be a surprise. So yes, it hurt losing that game on Thursday night. A win would have made this path easier. But I doubt too many Tar Heel fans would complain about that a few weeks from now when they’re booking hotels in Florida.

A win over Syracuse isn’t particularly exciting by any means, but each win makes it more difficult to fire Dave Doeren. Even more harmful to those hoping for a new coach in Raleigh … the next win puts NC State in a bowl game, and if that next win comes against North Carolina in the season finale? Forget it. Doeren is here to stay. Whether or not that’s a good thing or a bad thing for Wolfpack football is a matter of interpretation and perspective, but it would almost be sabotage to any impending coaching search to fire a coach on a bowl streak in Raleigh.

While freshman big man Omer Yurtseven sits out an NCAA suspension over eligibility questions, at least Pack fans know he’ll be on the court in 7 more games. On top of that good news, freshman forward Ted Kapita was cleared by the NCAA following an opening night win over Georgia Southern, and will be eligible immediately. Schools don’t typically have an extended run of good eligibility luck with the NCAA, and let’s be honest, NC State doesn’t typically have ANY luck of any kind. These two additions give Mark Gottfried the fourth (arguably the third) most talented roster in the ACC. You have to wonder if these waivers were a “thank you” from the NCAA to Wolfpack fans for their years of service to NCAA investigations.

Mike Krzyzewski announced this week that freshmen Harry Giles, Jayson Tatum and Marques Bolden would be shut down “for a while” to allow them to get healthy for a stretch run. Duke, the team, will be okay. The goal for the regular season is to stay healthy and stay in the South or East regions for the NCAA Tournament, but for fans, these players will be in Durham for one year and no one snagged tickets to see these guys wearing polos on the bench.

No, Roy Williams isn’t trotting out six lottery picks this year, but for those of us who grew up on ACC basketball, this is an old-timey, good-feelin’ team this year. First, they’re good. Really good. Deep tournament run good. Joel Berry and Justin Jackson are first-team all-ACC talents. But what’s fun for old school fans is to see players like Kennedy Meeks and Isiah Hicks grow and improve and be able to reap the rewards of their hard work, just like they did with Marcus Paige and Brice Johnson. There’s definitely some nostalgia around the North Carolina program these days.