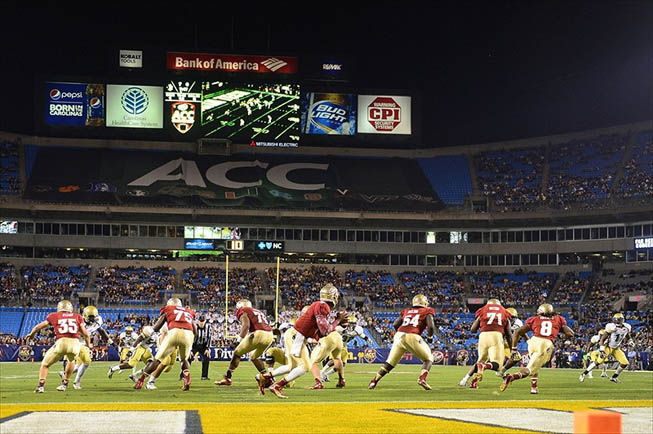 On the heels of the NCAA announcement that they’ll be removing championship events from North Carolina due to House Bill 2, the ACC has followed suit and will relocate neutral site championships scheduled to be held in North Carolina this academic year. This includes the ACC football Championship Game that had seemingly found a permanent home in Charlotte.

While fans and media of non-North Carolina based ACC schools applaud the move (strictly because of the admirable politics involved and surely not due to any sort of perceived competitive advantage afforded to the Big 4), officials from each of the Big 4 schools have chimed in with their support of the NCAA and the ACC, and their disgust at the legislation that Duke head basketball coach Mike Krzyzewski called “embarrassing”. But what if this latest round of protests against the state of North Carolina doesn’t work? Should the schools of the Big 4 follow suit and relocate to other states? And if they did, where would they go?

Permar: Bristol, Connecticut – The old joke had Duke as the University of New Jersey, but a little further northeast is a better landing spot. Still firmly within the ACC footprint, being in Connecticut gives life to the Duke-Syracuse rivalry and helps make Boston College more relevant. Plus, with an ACC school in Connecticut it thwarts UConn’s bid to a Power 5 Conference. Plus being right there in Bristol, Duke can maintain its cozy relationship with ESPN.

Swain: Nashville, Tennessee – If it were up to David Cutcliffe, the Blue Devils would pack up and move cross-country to Palo Alto to take the next step in becoming the Stanford of the East of the West, but basketball is king in Durham and Coach K’s record in west coast NCAA tournament games immediately removes this location from contention. The most logical landing spot would be Nashville, a city that practically begs for a school that’s consistently in the top 10 nationally AND has a good football program.

Permar: Richmond, Virginia – They get to stay in the south, they get to stay in a state capital, and they get to be the biggest football/tailgate show in town. Richmond is a perfect fit for the Wolfpack. Also, you could have a hoops rivalry with VCU that is balanced and fun because they aren’t Duke and UNC. Did I mention it’s where Russell Wilson is from? This seems like a no-brainer.

Swain: Washington, DC – I think the Wolfpack are a perfect candidate to fill the Ralph Friedgen-sized hole in the ACC footprint by moving to our nation’s capital. What better city to embrace the Pack? The people of DC are already used to having a new leader every four years, which is right on schedule for what’s about to happen to Dave Doeren. Plus with the Redskins and Capitals, NC State would be the most successful program in DC. OUR STATE! Oh wait, it’s a district.

Permar: Cayman Islands – As the Tar Heels have proven recently–both athletes AND non-athletes, remember, we’re moving the whole school here–sometimes the physical walls of a classroom can be constraining. Under the guise of modernizing, why not just do away with the hassle and expenses of maintaining buildings and go all online? And with the Tar Heels being the strongest brand in the state merchandise-wise, go ahead and set up shop in a place that let’s you keep all your cash. If you thought “non-profit university” was a sweet tax deal wait until you see the Islands.

Swain: Chapel Hill, NC – UNC is the most influential organization in the state, and nothing would be a bigger much-needed public relations win for the school than a strong stance against HB2. Because of that, I fully expect the Tar Heels to completely botch their relocation and then spend millions on PR consulting to deal with the hit. I’d also half-expect Larry Fedora to take advantage of the negative attention to re-hire John Blake and bring on Art Briles as a special volunteer assistant.

Permar: Norfolk, Virginia – Wake Forest has endured a move before, so they should be fine handling the transition from Triad to Tidewater. With NC State now in Richmond, this also makes Wake the 4th school in the state, a position they’re comfortable with; Wake Forest fans don’t like their school getting too much attention. Plus, since recruiting is often an uphill battle for the Deacs, placing them in the athlete-rich Tidewater region can only alleviate the issue. As soon as you get the accent down, Wake fans should love this move.

Swain: Waco, Texas – I’m with you, Permar. I was also looking for a state where the larger schools would make the Deacs an afterthought because it would be a shame to waste all of that angst and sneaky jealousy that’s been building up within the Wake fanbase for years. I’m still holding out hope that the NCAA does the right thing and drops a nuclear bomb on Baylor in the near future, and there’s no better candidate than Wake Forest to fill that academic, athletic, and religious void. Taking over for Baylor would literally be finding the worst house in the best neighborhood, which Waco knows a thing or two about.