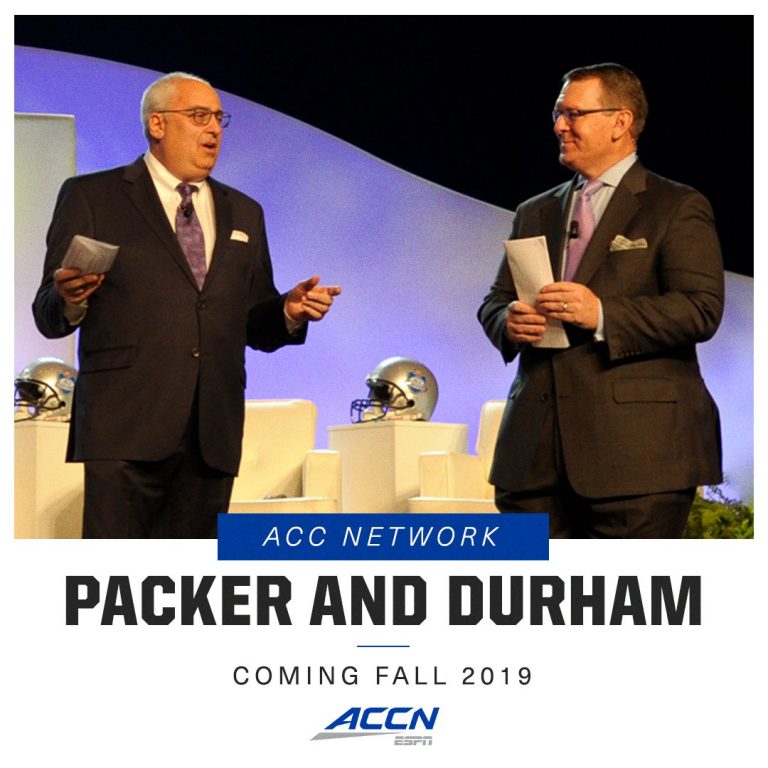 CHARLOTTE — What will air on ACC Network other than games? Not much was known before
Friday, when the league offered plenty of news at a Spectrum Center press conference.
The network’s anchor program, to air weekdays from 7-10 a.m., will be “Packer and Durham,”
featuring Mark Packer and Wes Durham. ACCN also announced two big documentaries
focusing on men’s basketball.

“I don’t think we could be in a better place as we move toward launch at this given point in time
as are right now,” ACC commissioner John Swofford said. “We’re excited.”

The ACC Network so far has carriage agreements with DirecTV, Fios, Hulu, Optimum and
PlayStation Vue, among others. It is expected to air about 450 live games, including 40 regular-
season football games, 150 men’s and women’s basketball games and 200 other regular-
season competitions and tournament games. The league debuted campaigns on social media
catered to each school earlier this week.

Debuting on Aug. 22, the day that the network launches, will be a one-hour documentary, “The
Class That Saved Coach K.”

Before he built the @DukeMBB dynasty, he had to build a team.

Jon Hock, the director of the 30 for 30 documentary about N.C. State’s 1983 title run called
“Survive and Advance,” is directing the film. It’s about the 1982 recruiting class that turned the
program around when some Iron Dukes wanted to move on from Mike Krzyzewski. That class
included Jay Bilas, the film’s executive producer, Mark Alarie, Johnny Dawkins and David
Henderson. 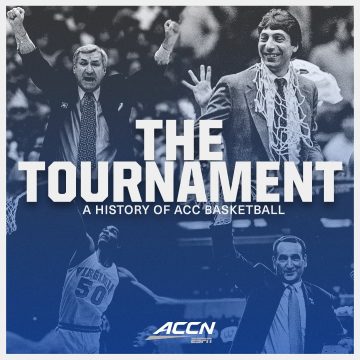 There will also be a multi-part documentary on the history of the ACC Tournament called, “The
Tournament: A History of ACC Basketball.” It isn’t expected to be released until the 2020-21
season.

“I can’t wait for ‘The Tournament,’ “ Durham said. “I can’t believe how good that’s going to be.
This hits at my sweet spot. This is what I’m excited about. This is going to be so cool.”
The documentary will give fans a deep dive into every chapter of the ACC men’s basketball
tournament – from its beginnings in 1954 to present day – and, along the way, the conference’s
history as well. 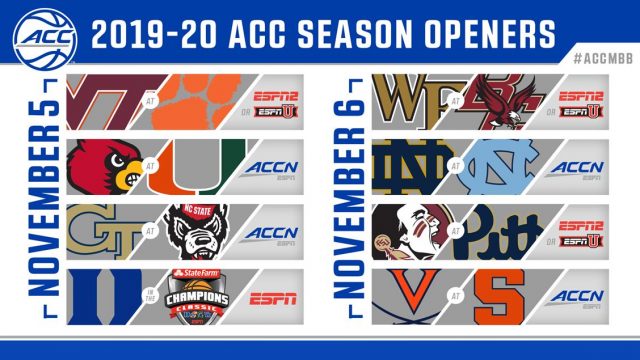 Carolina, Florida State at Pittsburgh and Virginia at Syracuse). Duke plays in the Champions
Classic on Nov. 5.

“I think it’s unique,” Swofford said. “We’ve never done it before. I’m not sure any conference has ever done it before. We think it fits the circumstances of this particular year. We’ll see how it’s
received in terms of looking at beyond this year. I think it will bring a lot of attention at the start
of the season because they are conference games. Right now, football is still going on and a lot
teams play games that don’t grab the attention of the public.”

The league is making no commitment to having games that early beyond next season.
“I think we’ll do it the first year and see. And beyond that, we’ll see what the conference wants to
do,” Swofford said.

But, with each team playing 20 league games starting next season, there always will be league
games in December. What to coaches think of playing league games in November?
“Some really liked it and others would rather wait,” Swofford said. “But they understand the
importance of it and the reasons.”

The first football game on the ACC Network will be Aug. 29 when Georgia Tech visits Clemson.
You couldn’t find two broadcasters with a richer family ACC background than Packer and
Durham. Their fathers both broadcast games for years, Billy Packer on an ACC and a national
level and Woody Durham as the legendary Voice of the Tar Heels.

“Between Woody Durham and Billy Packer, we grew up about as ACC as you can get,” Mark
Packer said. “We get into off-beat, crazy things that only ACC fans would know. I think that is
basically what we do.”

The duo has been doing a weekday morning-drive program for SiriusXM since March 2018, so
they have plenty of experience working together. Wes Durham has been doing that show from
his home in Cartersville, Ga., but is moving to Charlotte. The TV show will be done from the
basement of Packer’s Charlotte home, where ESPN is building a studio. The TV show will be simulcast on SiriusXM.

“I’ve enjoyed doing the show on SiriusXM, and I’m excited about talking about the league,” said
Durham, whose call of Friday’s UNC-Duke semifinal is his last Raycom basketball broadcast.
“We kind of made a commitment that we wanted to talk about every school in the conference in
every school. We try to cover something about every school. It could be anything.”

The TV show may be a lot like the radio show, except in front of cameras.
“We’re waiting to find out how that all comes together,” Durham said. “I’m excited about being
back in this area and being back in North Carolina. My mom’s excited about it.”

Durham’s workload, at least in terms of ACC games, isn’t likely to change that much. He’ll do
about as many football and basketball games for the ACC Network as he has been doing for
years for Raycom and regional sports networks.

Since Durham is relocating to Charlotte, the logistics still need to be worked out for him to
continue as the radio voice of the Atlanta Falcons, a position he’s held since 2004.
”It’s really going to depend,” Durham said. “There are a lot of moving parts. This just came
together. I hope to, if I can. We’re going to have to check it logistically more than anything else.
But they’ve been an incredible organization.”