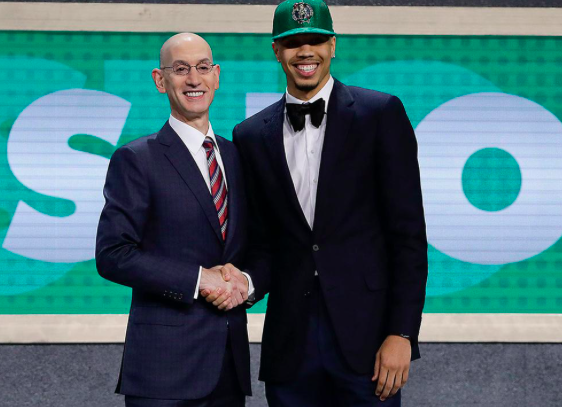 The ACC set a record last night with 10 players drafted in the first round of the NBA draft, and 14 overall. Just how dominant has the ACC been in the draft?

Digging into last night’s picks, who were the big winners and losers of the draft? No, not from an NBA team perspective, because honestly we don’t care. Okay, okay, SOME of us care. But we definitely care about our guys in the NBA, so here’s how things worked for them last night …

Did you know that the Celtics are 2nd from last in the number of games played by Duke alums, only ahead of the Toronto Raptors? As rare as it is for a Duke guy to play in Boston, it’s even MORE rare for a #1 seed to have a pick high enough to snag someone as immediately good as Jayson Tatum. This is a home run scenario for Tatum in every way possible. He’ll play for a great coach on a popular team surrounded by good players. This was absolutely the missing piece Boston needed to push the Cavs to 5 games again next season. WINNER

It’s so great to see Lenny Ham putting guys into the lottery as he’s such an undervalued coach in the ACC, even at his own school. Isaac is an absolute freak of a player and he’ll fit in great wherever he goes. I’m sure he was thrilled about going sixth … although his on-stage interview got a little weird when he said “I was hoping I’d go to New York”, who picked two spots after Orlando at #8. He did recover quickly by remembering he’s actually been in Florida for a little while already. LOSER

DSJ is going to start from day 1, and he gets to play with Dirk (for a year or two, probably), so it’s really hard to find anything wrong with Dennis Smith’s night last night. Other than the incredibly awesome new practice of searching through draftees old tweets.

Not quiet as poetic or romantic as CJ Leslie. Still, WINNER.

Oh man, speaking of social media, Luke Kennard had an interesting night. Kennard showed up to the draft with his family and, as announced an annoying amount of times on her Instagram, his girlfriend, reality star Savannah Chrisley. 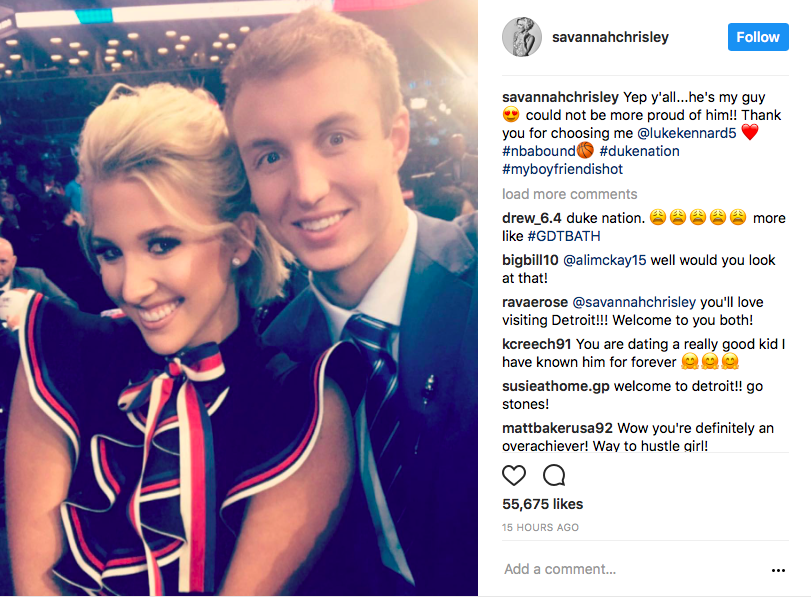 You can just tell this relationship is completely doomed. The look in her eye has that whole “I’m with an NBA player, and you know I wouldn’t even be here if he wasn’t an NBA player” glow to it, and Luke’s face is a classic “I’m so getting played, aren’t I” expression. Sort of like when LaVar and Lonzo Ball are in pictures together. LOSER

After going to Louisville, you probably need some time in Salt Lake City. WINNER

Ugh, the Kings. Anyone but the Kings. This draft grade has F written all over it because we were all really excited to see JJax in the NBA and there’s no way we’re watching the Kings. But they did get De’Aaron Fox earlier, so we’ll change the grade to a C because that’s intriguing enough to pay attention to. Oh, and they got Harry Giles and Frank Mason, Jr. later on, so we’ll retroactively change the grade from an F to an A- because this keeps him eligible for our interest with so many college stars on one team. WINNER

While we’re talking about Justin Jackson, we need to apologize for a joke that was made last night by one of our staff members (not me! don’t be mad at me!) that could definitely be interpreted as insensitive towards homeschooled students. We apologize for that wholeheartedly. To make it up to you, we will donate $1 from every UNC “Early Exit” Ampersand shirt sold between now and the end of the month to the North Carolinians for Home Education scholarship fund. 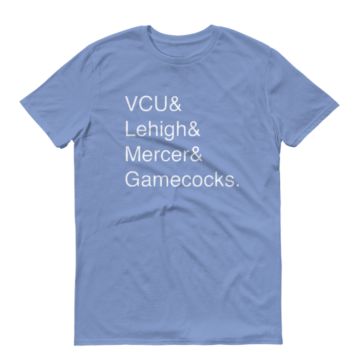 Look, John Collins is going to be a force in the NBA and he’s going to play for a team that’s already pretty good. That alone makes him a draft winner, but the real winner here are the Wake fans who probably rolled the quad last night when Collins went ahead of Harry Giles. WINNER

Just like we said with Justin Jackson, Giles to the Kings by itself sounds absolutely miserable for us as we are really interested to see how he recovers from his injuries. But considering he’s playing WITH Justin Jackson? Yeah, we’ll pay attention to the Kings. And Sacramento is a great spot for him, considering the Kings went through this same scenario last year with an injured blue-blood star and found tremendous success. WINNER

It’s REALLY hard for us to say anything bad about being shipped out to Denver (for … reasons), but we know Lydon was disappointed about not being the first Syracuse player to make it past the first round in an ACC Tournament venue. LOSER

VALIDATION! Nah, forget that. We were never with the good decision/bad decision debate with Tony Bradley because if you can get drafted to play in the NBA, you should be in the NBA draft. Bradley’s decision to go pro was always going to be a good one, no matter where he fell in the draft. Utah’s a pretty boring franchise to play for though, and without the tools to be a guaranteed immediate impact in the NBA, we fear that this will be the last time we talk much about Tony Bradley around here. A super important recruit for UNC. Forever a national champion. Wish you’d landed somewhere cooler. We’ll remember you fondly. We hope you get traded in a couple of years. LOSER

Swap this placement with Tony Bradley and they still both made the right decision. If you can get drafted, get drafted. Jackson was in a tough spot with Duke with Duval coming in, so what better way to prove that you’re an NBA player than with an NBA team? Still, we would have loved for him to stay in Charlotte, but with the salary cap reduction, Buzz City needed cash to pay Dwight Howard. He’s got potential to get floor time in New Orleans and gets to play with one of the best players in the NBA, but ultimately, trading Durham restaurants for New Orleans restaurants is a significant downgrade. LOSER

Honestly can’t think of anything we like more than when the Hornets pick up an ACC guy. Except Hansbrough. Or Henderson. Or Plumlee. But this is a good one, we swear. WINNER

The Spurs getting a guy who would have been a first round lock last year with the 59th pick? Yeah, we’ve seen this movie before. Jaron’s going to probably win a championship with San Antonio and then make a billion dollars as a free agent in a few years. WINNER