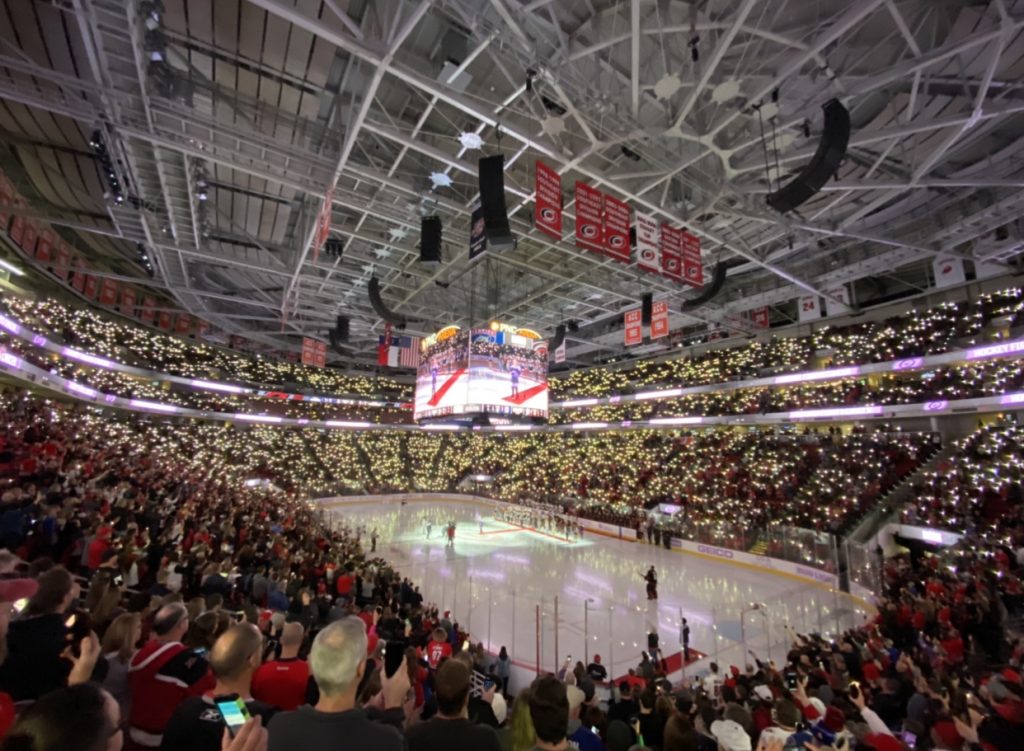 The Carolina Hurricanes calendar typically looks something like this:

Media day the first week of September. Training camp starts the week after. Opening night in early October. And while in many ways the NHL was able to be the same ol’ NHL in nothing-is-the-same 2020, the schedule isn’t one of those ways. The new calendar: media day in November, training camp the week after, opening night at the start of December.

And even that, as we’ve seen with everything else in our lives, isn’t guaranteed to happen as planned. The NHL bubble worked, for the most part. To be more positive, the NHL bubble worked in the most important ways it had to work. Players were safe. Fans got to see hockey all day every day. And the NHL absolutely nailed both of those aspects of bubble life.

What will happen when players return home? We’ve seen that we can stomp out the virus by committing to wearing masks, keeping distance from those who may be spreading it, getting tested, and having a plan for those who test positive. We’ve also seen that Americans aren’t willing to make any of those commitments in their daily lives. The bubble worked for these athletes. But introducing them back into the environment where we willingly continue to spread the virus, that December start in home arenas seems tentative at best.

Schedule and format speculation aside, let’s talk about what just happened, what happened before that, and what the future of these Hurricanes might look like.

It’s a strange effort trying to pick out the best moments from this past season because all of them make you second-guess that they even happened this season. Exactly 50 weeks ago, we sat with Rod Brind’Amour and Jordan Staal digging for information about Justin Williams and his will-he/won’t-he return. We listened to stories about how guys had enjoyed the brief off-season with their families but they were all dying to get back on the ice. We made jokes about Sebastian Aho and the Montreal Canadiens. If you told me that was 50 months ago, I’d believe you.

On opening day, we set up outside of PNC Arena at 9:30AM, hosting our 10AM radio show from the “first tailgate of the season”. We were followed by the David Glenn Show and the Adam & Joe Show, leading into the Fox Sports Carolinas broadcast led by John Forslund. None of these things exist anymore. It’s almost like the 2019-20 Carolina Hurricanes season points to an alternate universe that seems vaguely familiar but makes you wonder if it was ever real.

Dougie scored from the blue line. He scored on the rush. He scored overtime goals and shootout goals. He even scored from the red line. We had “the Svech”. Then we had it again. We had Petr Mrazek take a punch to the face during an altercation that made him fall so hard his teammates painted the outline of a body in the practice crease at RCI. We beat the Toronto Maple Leafs with a zamboni driver in the net. We had our Justin Williams “IT’S ROGAH CLEMMONS” owners box moment. We brought up a rookie who scored three goals on his first three shots. And then we had nothing.

In hindsight, it made perfect sense why the Hurricanes were one of two teams to vote against the NHL’s return to play plan. Having earned a playoff spot when the season paused, we were forced to play a play-in series against the New York Rangers just to get into the round of 16. Then, as the 5th seed, we matched with Boston, owners of the best record during the regular season. This, in the midst of unprecedented change, is where the NHL remained the same. Whatever’s needed for the big market teams, we’ll do that. The Hurricanes got through the Rangers (who ended up winning the draft lottery, of course), but there wasn’t enough in the tank to get through the Bruins. Which is fine because they wouldn’t have made it through the next test if they had. Teams like the Hurricanes are good enough to get through any head-to-head matchup with the odds stacked against them. They’re not good enough to get through five of them in a row. Not in this format.

It was funny to me that the story after the second straight year of being knocked out by the Bruins immediately became “should the Canes try to be the Bruins?” We see this a lot when ACC football teams play teams from the SEC. How many times have we heard takes about how Clemson is an “SEC-like” team … and what does that even mean?

In the press conference immediately after the game, the questions were basically “Hi Jordan, this is so-and-so from NHL.com, can you talk about how good the Bruins are and what the Hurricanes need to do to be more like them?”

Here’s the thing … this series is a couple of a bounces and/or a couple of calls away from being 4-1 the other way. The Canes were not great this series. We’ve seen them play MUCH better hockey. Some players were downright invisible, and some were only noticeable for being repeatedly on the wrong end of critical plays. Haydn freaking Fleury was our best goal scorer. And still, the series came down to pucks off of skates, rebounds popping up to be batted in versus bouncing over sticks in front of the net, and no-calls on one end that led directly to calls on the other end. For a series that ended 4-1, the margin was razor thin. And if the Canes were bad (admittedly, they weren’t great), what does that say about the Bruins?

But yes, NBC. Have all three of your studio hosts agree that Jaro Halak can win your precious big market team a championship. They got a C+ effort from the Hurricanes and the only two goal margin of victory they got was from an empty net goal.

The Canes don’t need to “be the Bruins”. Just being the Canes we’re used to would have been good enough.

2 – The NHL, and their broadcast partners, have no clue what fans want to see

I’m a big fan of hockey Instagram, and if you follow these accounts with hundreds of thousands of followers, you start seeing a pretty clear pattern that, more than anything else, hockey fans love speed, dangles, edge-work, snipes, sprawling saves and no-look passes. It’s a skill game. A game of creativity. And people love that stuff.

Watching the NBC family of networks, you hear praise for referees swallowing their whistles because it’s “playoff hockey” or praising “team toughness” like in last night’s Montreal/Philly game where no-calls led to cheap shots, and cheap shots led to fights, and clown-ass Mike Milbury is cheering it on like it’s the most beautiful thing he’s ever seen while calling Rod Brind’Amour “a whiner” for wanting the rules to be enforced.

It’s almost like the NHL and those who broadcast the NHL want the game to be only for old, white, male dinosaurs who wouldn’t be skilled enough to sniff the top level of hockey today so they do anything they can to stifle the jaw-dropping speed, skill and creativity these guys have. And it impacts the games.

Case in point, an open-ice textbook hook on Sebastian Aho on one end goes uncalled because “pLaYoFf HoCkeY” and it leads to a Jordan Martinook boarding call on the other end, which clown-ass Milbury either praised for sending a message (doubtful, unless the teams were reversed) or criticized for showing frustration instead of learning to fight through playoff hockey (likely, unless the teams were reversed).

Yes, NHL, we ABSOLUTELY want to see one of the most skilled players in the league wrapped up so he can’t use his skill. Literally no one wanted to see Aho skating with speed between the face-off circles at the goal to see what might have happened next. And why was he grabbed? Because everyone knows that’s not going to be called.

Referees … please protect skill and speed. Broadcasters … please recognize you’re calling a different game than the one you played 30 years ago.

John Forslund, for me, is NBC’s best play by play guy. He’s a star in the booth, and one of the nicest people you’ll ever meet. This isn’t an anti-Forsulnd take. But once again, we all owe Tom Dundon an apology on this one.

It’s simple business. If a customer would gladly buy a car with two cup holders, there’s no reason to design it with 12 cup holders. I’m going to watch Canes hockey on Fox Sports Carolinas regardless of who’s in the booth, and yeah Forslund is the best in the game and deserves to be there if he wants to be, but like Snoop said in The Wire, “deserve got nothing to do with it”. Dundon is going to spend the Canes money on things that add value to the organization, and Forslund, for me and many others, is 12 cup holders. I’d love if he came back – which is still on the table – but if not, I’ll gladly catch him on national broadcasts.

The Hurricanes have two restricted free agents on the big roster … Haydn Fleury and Warren Foegele. Heading into the season it would have been a no-brainer to qualify Foegele and let Fleury walk. Now, it’s the opposite.

Don’t get me wrong, Foegele is a great fit for the Hurricanes and Brind’Amour obviously loves and respects the way he fought to get on the roster in the first place. But man, Fleury was much improved during the regular season and almost unrecognizable in the playoffs. The Canes bread and butter is going to be their defense for some time to come, and Fleury is just such a perfect long-term fit at the blue line in that third pairing. Fortunately the Canes might not have to choose between one or the other with the space they’ll have to work with, but if they do, picking Fleury is the move to make.

Flat out, they’re going to have to be better next season. Three 60 point scorers (remembering they only played 68 games) and a whole bunch of sub-40 point scorers isn’t going to cut it. Trocheck looks the part, he just hasn’t produced yet in his short time in Carolina.

A lot was made of how the Hurricanes handled Necas when they decided to keep him in Charlotte for an entire season, but it seemed to work just fine. Necas had 16 goals and 20 assists during his rookie NHL season, but he was a force in the playoffs (compared to both his teammates and other rookies in the playoffs), and seems poised to take on the role of being a 2nd line threat behind the big three of Aho, Svech and Turbo.

From a fan’s point of view, the best of 5 qualifying series was perfect and highly entertaining. It also opens up an opportunity to not penalize teams for playing in insanely difficult divisions like the Metro.

It’s pretty clear that the Hurricanes are going to be anywhere between the 3rd to 5th best team in the Metro for the foreseeable future. That’s a perfect spot to be under normal circumstances, but under the bubble format, that means having to go through a qualifying round series before potentially facing, like they did this year, the best team from the regular season. There’s no guarantee that a higher finish makes it any easier (looking at you, about-to-get-bounced Capitals), but there IS a guarantee that finishing outside of the top 4 in the East makes your path as difficult as possible.