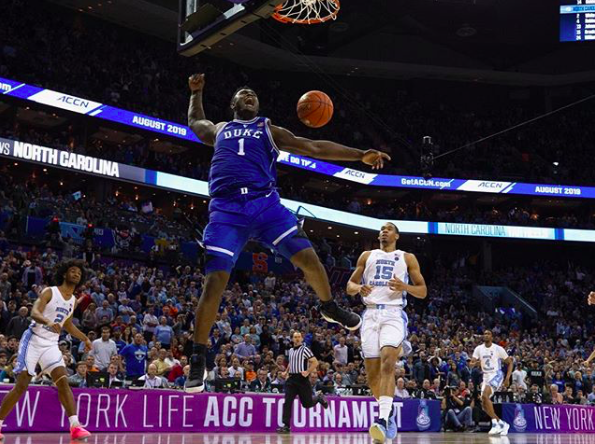 The 2019 ACC Tournament was a nice reminder of how much we all love to overrate things in the moment just to make us feel connected to the past. The last two years gave us Brooklyn. Maybe this year and the next will give us a bridge that allows us to truly accept the future.

All of the discussion coming from the electrifying semifinal nightcap between Duke and North Carolina was that it was the best college basketball game any of us had seen in person. While I’m not even sure I’d rank it in the top 10 of the most memorable Duke/Carolina games I’ve ever seen, I’m certainly not going to shout anyone down for having that opinion. Give a few days and they’ll back off of that feeling on their own pretty quickly.

There’s no denying it was exciting, and the action was certainly spattered with perfect basketball from time-to-time. Midway through the 2nd half, for example, Zion Williamson collected an entry pass and spun away from Garrison Brooks before he even knew Zion had the ball, and then finished the move by somehow springing from underneath the basket for a two-handed dunk on the other side of the rim. Before anyone even had a moment to appreciate what just happened, the ball was at mid-court flying from the hands of Coby White to Brandon Robinson and then immediately to a streaking Cam Johnson for an easy transition dunk. Unstoppable offensive basketball on both ends of the court, with the entire sequence lasting maybe a total of 4 seconds.

We all wanted this to be the greatest game ever, but now two days removed (my God, it’s only been 2 days?), Friday night’s Classico was just another exciting reminder of how high the bar really is to be “the best ever” at the ACC Tournament. For me, Charlotte 2019 in its entirety was exactly that. A very enjoyable reminder that, at this point, the best ever is a fantasy we’ve built up in our minds that will never come true, but coming up short still makes it better than any other conference tournament out there.

Charlotte was a great location, serving as a crucial culture-shock buffer between 2018 Brooklyn and 2020 Greensboro. The urban setting yielded plenty for fans and media to do within walking distance of the arena, but still, you knew you were in North Carolina. Every Uber driver wanted to talk about the tournament. Waiters not only recognized, but were star-struck by serving Roy Williams and David Robinson. Every bar and restaurant had permanent displays of UNC, Duke, NC State and Wake Forest memorabilia nailed to the walls instead of a generic “Welcome ACC fans” written in grease pens on mirrors, surely to be wiped away at opening on Sunday morning without a hint of hesitation. Unfortunately, you also knew you were in North Carolina when the bar’s house lights turn on at 2AM sharp when the city outside had already been asleep for hours. Still, it was nice to be home in North Carolina.

This tournament has spoiled us beyond belief, perhaps even to the point where we can’t even truly enjoy it anymore. It would be easy to feel like Zion Williamson’s three-day performance was the best ever at the ACC Tournament. But then you’d be reminded that he was still a full game’s worth of points away from matching Randolph Childress’ scoring output over three days in 1995. Maybe he’s the best player we’ll ever see at this event. But we’ve seen Len Bias, and Michael Jordan, and Tim Duncan, and David Thompson. It’s debatable where Zion lands among those two ACC Tournament superlatives, but if anyone deserves the benefit of recency bias, it’s that guy.

Zion is the perfect college basketball player. If there is anyone in the history of college basketball who should be angry about the NBA’s age restriction and the NCAA’s fight to keep money in their own pockets versus being in the pockets of the athletes, it’s Zion Williamson. Still, he’s embraced the college game and has approached the season like a four-year senior who is fighting tooth and nail to extend the greatest time of his life just one more day before heading off to his future in insurance sales. He plays hard. He has fun. He will talk with anyone who tries to talk with him, and he’ll make them feel like they’re somehow peers without a hint of “I’m better than you.”

Around the ACC, you see players and you can peg them as “Duke guys”, like a Marvin Bagley who is very clearly destined for NBA greatness, or “UNC guys” cracking jokes like Theo Pinson, or “Virginia guys” who are thoughtful and mature like Malcom Brogdon. Zion, simultaneously, is all three. He’s a regular 19 year old kid with broad enough shoulders and a big enough heart to handle becoming the most popular basketball player on the planet over the next few years. And I don’t think we appreciate him enough.

On Thursday night after the Syracuse game, the press conference was standing room only to ask Zion questions about his new shoes and his decision to come back from injury after missing the last three weeks of the regular season. On Friday night, the same, with questions about what it was like to finally play Carolina. On Saturday night, however, he sat in front of a half-empty media room full of familiar faces who have been covering Duke all year.

With the Tar Heels out and the shoe stories already written, the local and national media corps couldn’t be bothered to stick around and talk to a player who, with the NBA draft rule hanging on for dear life with the Players’ Association, may be among the last of his kind. The same group of media who felt like “Do you think senior night is better when both teams have seniors” was a relevant question for Mike Krzyzewski a week ago in Chapel Hill did not feel like they had any questions on Saturday night for arguably the best freshman we’ll ever see in the ACC. Maybe that’s why we’re so quick to mis-label experiences as “best ever” … we don’t deserve the experience of witnessing it when it truly happens.

In fairness, we’ve never known how to handle “different” in the ACC. We dreaded Brooklyn. We hated the play-in game. We long for the days of the 8-team ACC Friday where each school had a distinct section in Greensboro Coliseum clearly defined by the color of the clothing and the giant school flag hanging over the seats. We miss our noon championship game on Sunday. Everything new that we complain about, from rotating sites to one-and-done players, has made the conference better, and the ACC Tournament better in order to keep up with the times. We just don’t know how to process it because it was really, really special before any of those changes.

I worry about Greensboro next year because we’ve had enough fun since 2015 to distract us from how truly great things used to be. Having the tournament in Greensboro will be like going back and watching your favorite movie growing up and realizing how much the special effects suck compared to what we have now. I worry that Greensboro 2020 will negatively impact our great memories of when things were truly “the best ever”.

Then again, maybe it will do the opposite and help us appreciate the greatness hidden in the “different” that we fight against as ACC fans. Maybe we’ll have a chance for some closure, allowing us to celebrate our past and put it away forever, completely frozen in time so that it remains perfect and completely independent of what we get in the modern ACC. We won’t have to inflate an exciting Duke/Carolina game to “all time” status just because we want so badly to hold on to what feels familiar. We won’t have to pretend like it’s more meaningful to say goodbye to one of the endless supply of Luke Mayes or   Nolan Smiths or who steal our hearts forever than it is to say goodbye to the only Zion Williamson we’ll ever see.

Maybe we’ll get to “lean into the future”, like the explanation behind the ACC’s updated, italicized logo, and accept that things now can be treasured for what they are instead of compared against what we’re still holding on to from the past. Maybe this year in Charlotte and one last run in Greensboro will do that for us. That’s my hope at least.