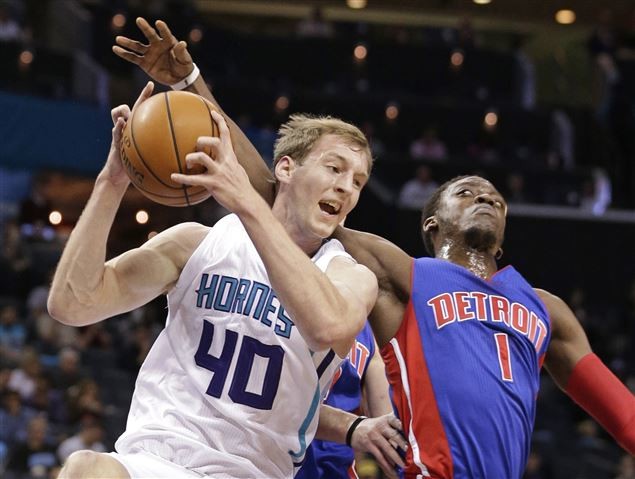 It’s safe to say that the start to this calendar year has been anything but normal — for so many different (and depressing) reasons. However, let’s focus on something that causes slightly less existential dread than our current political landscape: The Charlotte Hornets — winners of just four games in 2017.

The Hornets find themselves with a record 23-26; it’s the first time that the team has been three or more games under .500 since last January. Their offense has slumped to the middle of the league (105.7 points per 100 possessions), and the defense has dropped outside the top five — a critical benchmark for this team to hit. One of the biggest concerns has been the absence of center Cody Zeller, who has been sidelined for over a week with a quadriceps contusion.

The Hornets are now 1-10 on the season with Zeller out of the lineup — six of those losses have come after the calendar flipped to 2017. Charlotte is in the midst of a five-game losing streak, and Zeller has missed four of those contests. In those last four games, the Hornets have an efficiency differential of -8.7 points per 100 possessions, which is the sixth-worst net differential in the NBA over that stretch of time. Say it with me: Not great, Bob.

It’s more than a lack of depth

This team’s biggest concern is the bench; it’s obvious when you watch them play: as soon as three or more starters — in particular, Kemba Walker — hit the bench, they crater on both ends of the floor. Scoring, especially, becomes an increasingly arduous task. With Walker off the court, the Hornets haven’t been able to muster a measly one point per possession. Kemba and John Wall are the only two Eastern Conference point guards who can make that claim.

The absence of Zeller, however, is profound. The fourth-year center is No. 1 on this team in net rating; the Buzz score 108.7 points per 100 possessions with him on the floor, which would rank as the No. 8 offense in the NBA. Defensively, this team gives up just 100.7 points per 100 possession with Cody patrolling the paint — a mark that would rank as the best defense in the league. Opponents are shooting just 50 percent on field goals defended at the rim by Zeller, which is a respectable mark.

Too much is asked of Kemba on a nightly basis, but that spotlight is magnified even more sans Cody Zeller.

Kemba Walker has become one of the league’s best pick-and-roll players; in fact, he leads the NBA in points per game out of this action. He’s lighting-quick, possesses a devastating crossover and can rain pull-up threes, but part of what makes him so deadly is the expert screen-setting of Zeller, who has matured into one of the game’s best. He’s super clever, and knows how to play angles — changing directions at the last second or using his posterior to open a lane to the basket.

Zeller ranks fourth in the NBA with 5.5 screen assists per game. This means: nearly six times a night Zeller sets a pick that results directly in a bucket. The former Hoosier is adept at finishing these rolls, too. He uses 3.9 possessions per game as a roll-man in PNRs (No.8 in the NBA), where he shoots 54 percent from the floor on.

Of players who have recorded at least 100 possessions as a roll-man this season, Zeller ranks 13th in offensive efficiency: 1.04 points per possession — better than Marc Gasol, Kristaps Porzingis and Blake Griffin. The Hornets don’t have a plethora of perimeter shooting options, so the gravity Zeller provides helps cave defenses, and opens the floor.

He can even initiate this rim-running action on his own — with dribble-handoffs. Here the Hornets run split action with Kemba and Nicolas Batum into a DHO with Zeller, like such:

Zeller has worked on his short rolls, too, which have him finishing these rim dives with a floater instead of a slam. This requires both touch and timing:

Nicolas Batum and Zeller have wonderful chemistry with one another. The Frenchman averages six assists per game — 1.5 of those, according to NBA.com, go to Zeller, who shoots 59 percent on passes from Batum. The same could be said of Zeller’s connection with Kemba and Michael Kidd-Gilchrist as well. Zeller connects on 62 percent of his attempts following a pass from Walker, and 77.8 percent from MKG.

In general, the Hornets do just about everything better with Zeller. The team rebounds at a higher rate when Zeller’s on the floor; according to the league’s tracking data, Charlotte grabs 51.5 percent of available rebounds with Zeller in action. This would rank as the fifth best total rebounding rate in the NBA. The Hornets’ true shooting rate drops nearly two percentage points with Zeller on the pine, too. For a team with slim margins, this matters a lot.

Things won’t get any easier for the Hornets Wednesday night, when they head to Oakland for a meeting with the death machine that is the Golden State Warriors. Zeller hasn’t even practiced since sustaining the injury over a week ago against Washington. Even if Steve Clifford has that ever-so-valuable Amazon Prime subscription, I don’t think Charlotte’s best Zeller will be ready for a showdown with Steph and KD. Yikes.