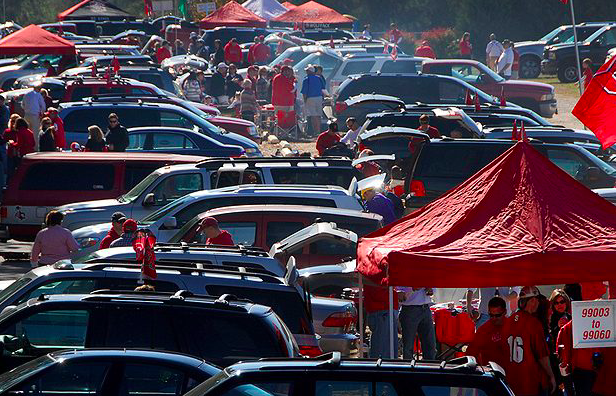 Beer sales at college games could be a nice revenue driver for local schools, and our friends at Capital Broadcasting have done a good job of breaking that down this week. To summarize, Wake Forest already does it, and Duke, NC State and UNC all sell alcohol in premium sections within the stadium. There’s some light discussion around expanding beer and wine sales to the rest of the stadium, but beyond that, there’s not much movement on the issue.

From the schools’ perspectives, it seems like a no-brainer. Selling something that most fans want, in theory, is always a good idea. Yes, there are ethics, logistics, and liability questions to be answered, but it’s not like professional stadiums haven’t already taken out all of the guesswork. There isn’t much standing in the way of making it happen beyond the general fear of any change and the risk/reward analysis to take into account who will love it and who will hate it.

Who SHOULD hate it, oddly enough, are the fans. College sports, and college football specifically, rarely make money, so any item that drives revenue is worth the schools taking drastic measures to protect. If NC State is dependent upon the $200,000 or $300,000 of additional revenue that she estimates beer sales would bring, how does the school feel about the hundreds of thousands of dollars worth of alcohol being consumed outside of Carter-Finley’s gates? Sure, it’s a leap to get to that point where tailgating would be negatively impacted by beer sales inside the stadium, but pro teams don’t deal with the same financial crisis that collegiate athletics programs face. If the tailgating experience is altered in even the slightest way, schools can be assured that they’ll be selling beer to empty stadiums every Saturday.

Even if there’s not any impact to alcohol use outside of the stadium, there’s the convenience factor to consider. If I’m given the choice of pounding two more of my own beers in my folding chair in the parking lot versus heading into the stadium to pay $20 for two UNC beers, I’ll see you in the second quarter. Maybe. As soon as football season starts, the talk will undoubtedly shift towards the annual conversation of “why aren’t there more fans in the seats?”, and giving access to alcohol seems like it should be an incentive to go to the game in person. But at the going rate for stadium beers? I’m good.

Want to know what I would pay for? Sell me one of those safe, plastic folding liquid containers for $100 and let me bring it into the stadium filled with whatever I want to fill it with. They’ll run you about $0.15 to buy them in bulk and brand them. If you want fans in the seats and additional revenue, do the math on that.