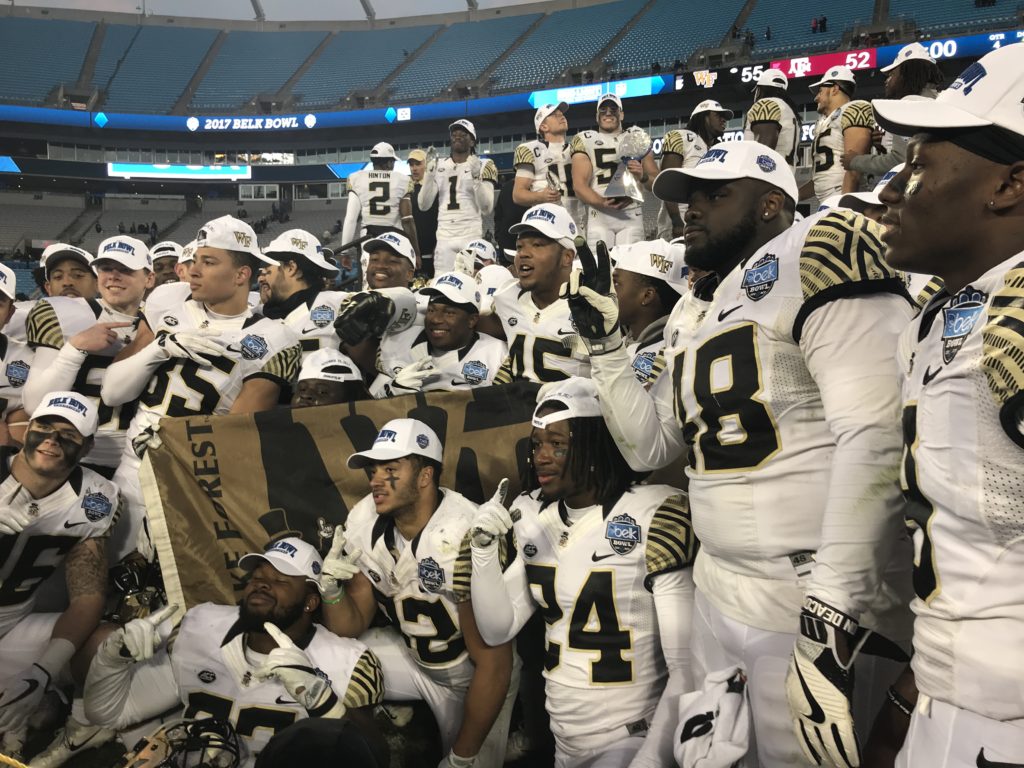 Wake Forest beat Texas A&M in the Belk Bowl, 55-52. The Deacons wrap up their season with a final record of 8-5. NC schools are now 4-0 in bowl games this season and as I type this, things are looking good for the Wolfpack in El Paso (oh boy am I gonna regret this if NC State loses).

A shootout throughout, but Matt Colburn II scored the go-ahead touchdown with less than with 2:18 remaining in the game. Wake Forest then did just enough defensively to force A&M into a turnover on downs that clinched the game.

GIF that best summarized the game:

What people will be talking about:

It was a game of runs, as they say. Texas A&M jumped out to a 14-0 lead after blocking two Wake Forest punts. Then Wake Forest scored 31 unanswered. Wake went into halftime with a 10-point lead. A back-and-forth 2nd half featured a handful of lead changes. John Wolford and Matt Colburn II proved to be too much for the Aggies. Wolford threw for 400 yards and four TDs on his way to being named MVP. Colburn added 150 yards on the ground, including the game-winning TD.

This game was already the highest scoring of the 2017 Bowl Season by halftime. It more than four hours to play. The teams combined for 1,260 yards.

“Matt Colburn was big. When he rips off those big runs, it makes what we do hard to defend.” -Wolford#BelkBowl

What people should be talking about:

The first quarter included a bunch of weirdness on special teams. Wake Forest’s first punt of the game was blocked and recovered in the end zone by Texas A&M. Then A&M’s ensuing kickoff was kicked out of bounds. Then, after another 3 & out, Wake Forest had another punt blocked. Then after Wake Forest scored to make it 14-7, they kicked the ball out of bounds on a kickoff. A “Roughing the Kicker” call later in the first quarter canceled out a missed Wake Forest FG attempt and eventually led to a Wake Forest TD.

#BelkBowl: Both teams paying homage to John Kasay so far in this one by kicking the ball out of bounds on a kickoff.

Post-game, Wake Forest Coach Dave Clawson mentioned that some of this weirdness on special teams isn’t necessarily all that uncommon. After going so long without a playing a game, it can take a while for teams to find a rhythm. Once they found their rhythm, the teams couldn’t stop scoring (despite combining for 5 turnovers).

Wake Forest Tight End, Cam Serigne, caught a 37-yard TD pass in the 2nd quarter, making him the ACC’s all-time leading TD catcher among TEs. He finished the game with nine receptions, 112 yards, and a TD.

#BelkBowl: Wake Forest's Cam Serigne is my favorite player because he's a good TE, but he also sounds like a good wine I could have with dinner.

Wake finishes their season with an 8-5 record. There was lots of post-game talk about how this senior class played a major role in “raising the bar” for the Wake Forest program to go from 7 wins to 8 wins this season. Dave Clawson will challenge next year’s team to raise the bar once again.

Wolford, on raising the bar from 7 to 8 wins… “It’s big. Hopefully the guys underneath us have a foundation, but now they’ve gotta do even more than what we did. Excited for what they have in store next year.” #BelkBowl