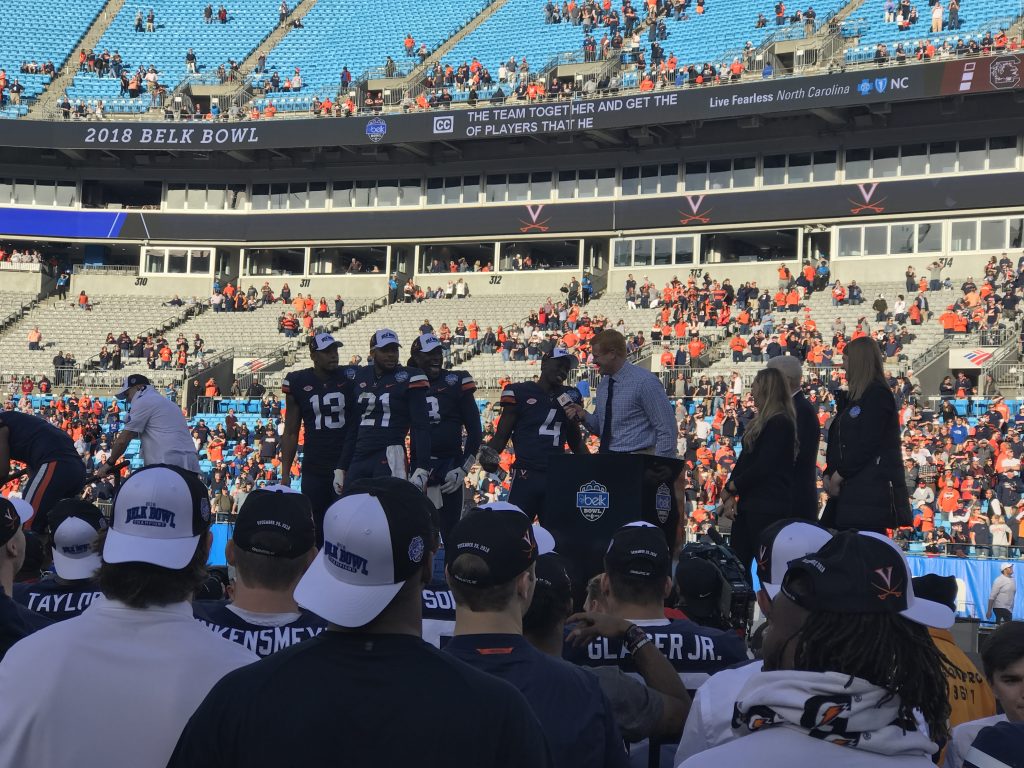 It’s the Belk Bowl, babbbyyyy! You love it. We love it. And it never disappoints. Yes, the 2018 Belk Bowl featured a school that SC8 has repeatedly, non-sensically, and ceaselessly mocked since its basketball team lost in embarrassing, historic fashion right here in Charlotte earlier this year (UVa) vs. a team that – well – is from South Carolina. Some may have questioned why we even bothered to show up this year. Never doubt us. It’s the daggum Belk Bowl. We’re not missing it.

So here are #8things to prove that we were there…

It wasn’t even close, folks. Our Hoos (A-C-C! A-C-C! A-C-C!) defeated the South Carolina Gamecocks, 28-0. As is common in shutout wins, the Cavaliers took an early lead and never looked back.

I’m not a football guy. I’m really more of a marching band guy. And while I believe the greatness of UVa’s marching band deserves some credit here, I also know enough to tell you the Cavaliers’ defense dominated throughout. On 11 drives, SCar only managed to get beyond UVa’s 40-yard line three times (missed field goal, turnover on downs, interception). The Gamecocks’ other eight drives? Five punts, two more turnovers on downs, and another interception.

While the defense dominated, the offense was methodical and chose its spots wisely. The backbreaker was a 14-play, 90-yard drive that took 8:10 off the clock and led to a Jordan Ellis TD late in the first half, giving UVa a 14-0 lead at intermission.

Your Belk Bowl MVP, WR Olamide Zaccheaus, had himself a ballgame. The senior from Philadelphia hauled in 12 receptions for 100 yards and three touchdowns (and added another 10 yards on the ground).

Zaccheaus: This will be the most memorable game of my college career. Reflecting on everything I’ve done to get to this point…. it was worth it.

Olamide Zaccheaus is still out here dapping up everybody in sight and leaving no autograph request ungranted. pic.twitter.com/tZgh61SiuH

It wasn’t just the Olamide Zaccheaus show. While he dominated on the receiving end, his quarterback’s outing was just as noteworthy. Bryce Perkins threw 22-31 for 208 yards and 3 TDs (all to Zaccheaus) – a 159.3 QBR – and he added 81 yards of his own on the ground.

And let’s not forget senior running back, Jordan Ellis, who tallied 106 yards and a TD. His 106 yards helped him to eclipse 1,000 rushing yards in his UVa career.

Let’s give Seth Davis a break, shall we…

Oh, y’all thought Seth’s “Virginia. Sharpie.” tweet was about the UMBC game back in March? No way! Just like with the miracle of childbirth, sometimes tweets need nine months to properly come into fruition.

As is the beauty of life, this tweet just required nine months to gestate. https://t.co/KZUoBADrD0

So the football team earned a postseason win in Charlotte after the #1 seeded basketball team failed to do it back in March. I asked some guys if that means they get bragging rights. They didn’t bite.

I asked Jordan Ellis, Joey Blount, and Eli Hanback what kind of bragging rights they could take back with them to Charlottesville after earning a postseason win in Charlotte…

I'm not sure they were picking up what I was putting down. pic.twitter.com/4wCeTXtEY2

Quote of the Game

After earning the Belk Bowl MVP Award, senior WR Olamide Zaccheaus was asked how it felt to have such a big game in his last game as a Cavalier and what a bowl win means for the UVa program moving forward.

“Honestly, I wish I had another year. But I’m grateful to have left this place better than I found it. This program is moving in the right direction.”

Y’all know I’m not publishing a blog post without including some shoutouts to the game’s providers of music. We got a phenomenal Stevie Wonder medley from the band that played at the pre-game fanfest.

And we got “Talkin’ Out the Side of Your Neck” (a contender for “greatest marching band song of all time”) from the UVa marching band after the game was over.

TALKIN’ OUT THE SIDE OF YA NECK pic.twitter.com/vzSoLnXnOn