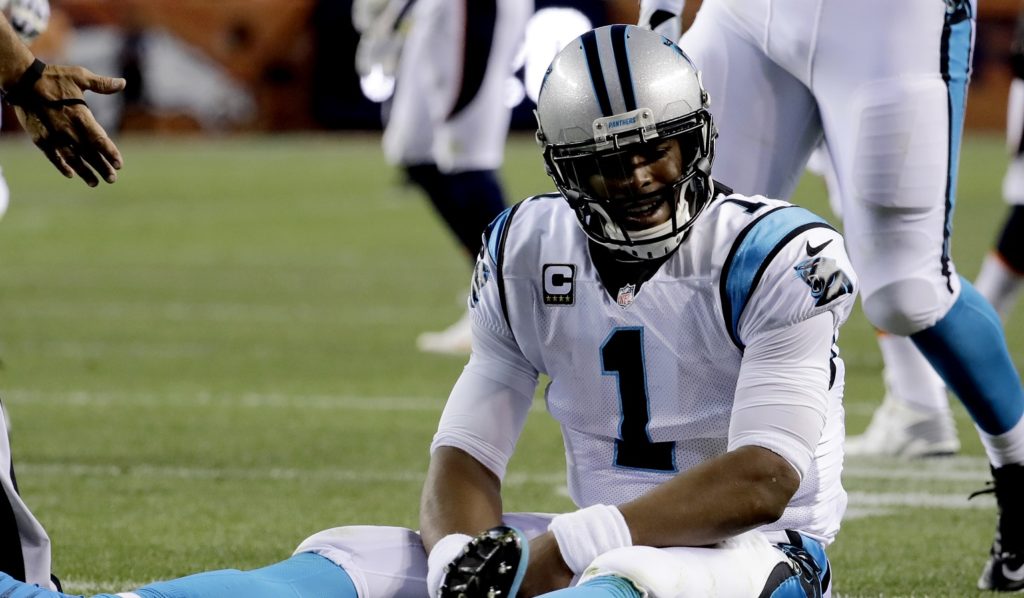 Without further ado (and in no particular order), here is the seventh installment of our eight worst North Carolina sports moments of 2016.

2. The Carolina Panthers Lose Super Bowl 50 to the Denver Broncos

The 2015-16 Carolina Panthers will forever be the most fun team I have ever loved.

The personalities, the success, the style of play and the pure swagger of that Panthers team immediately cemented that group in North Carolina sports lore.

Cam Newton further established himself as the franchise quarterback he was destined to be by dominating the NFL and running away with the MVP trophy.

Josh Norman arrived as an elite lockdown cornerback who could jaw with almost anybody in the league (sorry Josh, we’re not even pretending you could take Agent 89).

Those Panthers provided amazing memories among the top in franchise history. The Thanksgiving blowout in Dallas, the Newton-to-Greg Olsen dagger in Seattle, the Thomas Davis game-saving interception against Green Bay and every dab in between still resonates deeply in the hearts of fans across the Carolinas.

Most importantly and impressively, though, the team put together a 15-1 regular season in 2015, setting itself up for a deep postseason run in 2016.

Of course, the NFL postseason is an absolute meatgrinder of football’s best, and Carolina’s first test came in the form of a monster it finally slew earlier in the season: Russell Wilson and the Seattle Seahawks.

We’ve already discussed our disdain for Wilson and his ragtag group of 12s. They’re the worst. They’re the football Warriors except Wilson makes Stephen Curry look like Dwayne “The Rock” Johnson.

With that in mind, if the Panthers slew that monster in September, they reanimated it, killed it again, danced on its grave, dug it up and pissed on its corpse in January.

Jonathan Stewart opened the game with a 59-yard run and subsequent touchdown, Kuechly followed that with a pick-six on the very next drive, and Carolina pulled ahead for a 31-0 lead. The Seahawks fought back to make it a one-score game with just over a minute left, but Davis sealed the victory with an onside kick recovery and the Panthers advanced.

After that decimation of the defending NFC champs, Carolina turned its attention to the Arizona Cardinals, the second seed in the NFC side of the bracket.

What the Panthers did to the Seahawks was merely a preview of what happened in the NFC Championship Game. Carolina forced seven turnovers, outgained Arizona by nearly 200 yards and destroyed the Cardinals, 49-15. The game could be summed up by two plays:

Two weeks later, the date was set: The Carolina Panthers were going to the Super Bowl, and they would face the Denver Broncos in likely Peyton Manning’s last NFL game.

As if the Super Bowl needed any more of a selling point, the game featured the NFL’s most prolific offense against one of the most dominant defenses in football history.

Two weeks of hype and hope culminated on February 7th. The Panthers kicked off to the Broncos, and Denver marched down to kick a field goal and take a 3-0 lead. The teams traded 3-and-outs, and on the ensuing drive, Newton found Jerricho Cotchery for a first down up the middle of the field.

Except, wait, nope, nobody knows what a catch is, and it’s ruled incomplete. After CBS officiating expert Mike Carey said the incompletion should be overturned, the officials immediately rule that the play stands, because even in the Super Bowl, #NCStateShit rears its ugly head in.

You just knew something disastrous was about to happen, and the only way that play is worse is if Miller concusses Newton en route to the touchdown, since a ref wouldn’t throw a flag anyway.

After both defenses continued to trade stops, the Panthers finally did an offense and got into the Broncos red zone. An Aquib Talib facemask moved Carolina down to the goal line, where Stewart would punch it in for six.

Later in the quarter, Jordan Norwood pulled the Ryan Switzer Not Fair Catch Play to zoom out into Panthers territory, where the Broncos would take another field goal to make the lead 13-10. The Panthers appeared to finally be finding an offensive groove again when Mike Tolbert rushed for a first down but PUT THE BALL ON THE GROUND. That was Tolbert’s second fumble of the game, but this time the Broncos recovered.

Denver drove deep into Panthers territory again after the turnover, but Kony Ealy dropped into coverage for a gigantic interception to save likely another field goal. Because this was the Panthers in Super Bowl 50, though, the offense follows up with a 3-and-out totaling zero yards.

Carolina had a chance to get into field goal range to end the half, but DeMarcus Ware fittingly sacked Newton to end that threat.

The story of the second half read the same: The Panthers would land one or two shots on offense, and immediately stall out or turn the ball over.

Still, Carolina’s defense also held strong, and with 4:16 to play, Carolina had the ball down six points with a chance to tie or take the lead.

After the game, Newton left his press conference early, setting off old crotchety sportswriters and former players to shake the globe itself with the EARTHTAKE about maturity, class, losing with grace, being a crybaby, etc.

Life is suffering and we should all hate ourselves.

This game, man. While the UNC/Villanova heartbreak consisted of a thrilling conclusion that stabbed Tar Heel fans right in the heart, Super Bowl 50 burned Panthers fans slowly from start to finish. The Broncos never immediately killed Carolina, instead suffocating the ‘Thers for 60 agonizing minutes.

The Panthers defense kept the team in the game, but Denver’s defense made bigger plays on the right side of the field, and that’s where the difference was made. The Broncos exposed Carolina’s patchwork offensive line immediately, which in turn led to one of the worst games of Newton’s career. He had no time to make decisions, and when he could get the ball off, his throws rarely hit.

The firestorm of Cam takes after the game only salted the wound. Newton spent so much of 2015 smiling, stunting, dabbing, making people laugh. The dejected Newton that spoke to the media after the game was one we hadn’t seen in a very, very long time, and the second he walked off the podium, any work he did to repair his reputation unfairly evaporated.

The Panthers got their second shot at the Broncos in the season opener this September, and Denver decided to further change its gameplan by trying to actually murder Newton on national television.

The offense performed better, but Newton was clearly affected by the hits, which continued to come until he suffered a concussion in Atlanta, which still didn’t change his status of getting calls, as evidenced by a DECEMBER Monday Night Football game against Washington.

2016 started so strong, but collapsed so quickly. Super Bowl 50 triggered a series of events that somehow led to Norman leaving the team for nothing in return, Newton dying his goatee, saying #AllLivesMatter and apparently refusing to pay off a bet against NFL officials, Kuechly dying on Thursday Night Football and Graham Gano forgetting how to kick field goals in critical moments.

While each individual college fanbase in North Carolina experienced some form of 2016, the Panthers are a largely unifying team in the state. The only thing that can make Triangle fans coexist more is the UNC scandal, and even that only covers two out of the three schools. But when Carolina loses, most of the state loses.

And starting with Super Bowl 50, we all did a lot of losing this year.