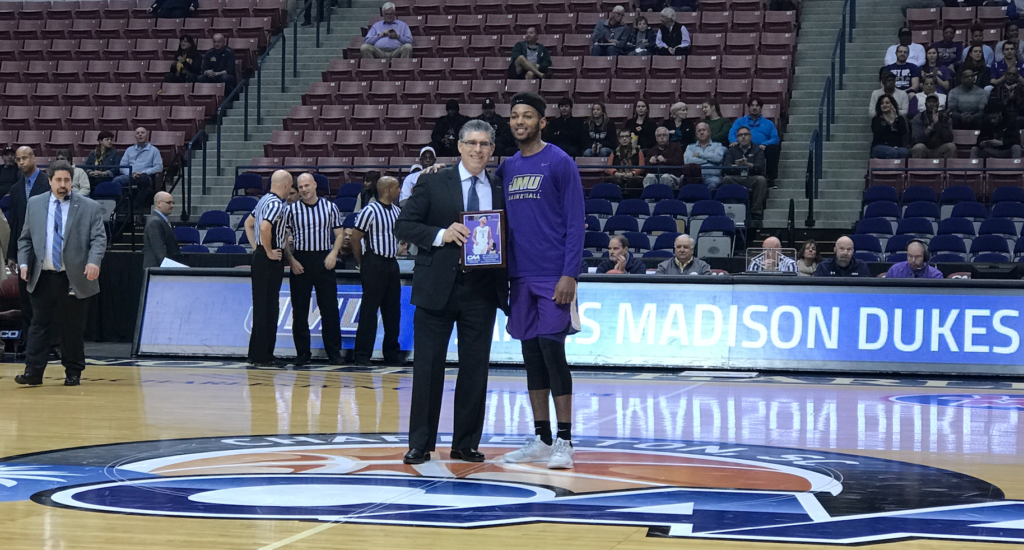 Today was day one of the CAA Basketball Tournament in beautiful North Charleston, South Carolina. Yes, North Charleston is different than regular old Charleston. We don’t have cobblestone roadways all the way up here in the north, but we do have a Tanger Outlet.

Today’s play-in matchups featured 8-seeded Drexel vs. 9-seeded James Madison, followed by 7-seeded Delaware vs. 10-seeded Elon. Drexel trailed for the majority of Game 1, but rallied toward the end to defeat JMU 70-62. Delaware controlled the game against Elon pretty much throughout, withstood a late, desperate rally attempt from the Phoenix, and won 86-79.

Drexel’s Second-Team All-CAA performer, Tramaine Isabell, struggled in the first half against JMU, going 1-8 from the floor. He came alive in the second half and ended up scoring 24 points on the night. Austin Williams also had a nice game for the Dragons, tallying 10 points, 15 rebounds, and seven blocks. Meanwhile, JMU finished the game shooting just 32% from the field. The Dukes simply ran out of gas after leading most of the first 30 minutes of the game.

Elon got 27 points from senior, Dmitri Thompson, but only four points (and five fouls) from their other senior, Brian Dawkins. Meanwhile, Delaware’s Eric Carter and Ryan Daly combined for 43 points to send Elon home.

Drexel’s Tramaine Isabell went 12-14 from the FT line. Pretty impressive collection of free throw attempts for a dude who doesn’t stand much taller than six feet (if that).

In Elon’s final regular season game of the year earlier this week, fifth-year senior Brian Dawkins scored 25 points. Senior Dmitri Thompson scored 27 points tonight for Elon. The fact that those big nights happened in separate games tells a lot of Elon’s full-season story. Elon has a number of guys that are capable of big games, but it seemed like they never had multiple guys “go off” in the same game during the seven-game losing streak that ended their season.

Drexel moves on to face the CAA’s top seed, College of Charleston. The Cougars are really good and they’ve also essentially got home court advantage.

Delaware will play Northeastern tomorrow. Northeastern was a bit of a surprise this year, but they’ve had a really nice season. Their Coach, Bill Coen, is this year’s CAA Coach of the Year.

Coach Matheny on the Hot Seat?

Elon came into this season with high expectations. The Phoenix was predicted to finish third in the conference. They ended up finishing last. I hope this doesn’t happen, but I wouldn’t be surprised if Coach Matt Matheny ends up getting fired in the next few days or weeks. There’s a lot of transition anyway, as Elon Basketball is heading to a new building next season. Elon’s athletic leaders may decide that adding one more piece to that transition might be the easiest way to do it. Again, I hope not, but keep an eye out for it. Matheny has been all class, all the time throughout this challenging season.

Quote of the Night:

Elon Junior and 2nd-Team All-CAA performer, Tyler Seibring, was asked to reflect on this season and his time thus far at Elon.

Seibring: "We had a tough run at the end, but we had a lot of good memories and a lot of good basketball. Winning or losing, it's the people that are around you. I'm gonna miss the seniors and look back fondly on them and what they've meant for me and for our program."

Okay, but what about the pep bands?

James Madison easily has the best pep band in the CAA and I’ll be shocked if anybody comes close to proving otherwise tomorrow. It’s a doggone shame that they lost tonight. They’ll be sorely missed throughout the rest of the tournament.

Drexel’s Pep Band honestly might have actually been a local high school band wearing Drexel shirts. That’s all I have to say about that.

Delaware’s band played a lot of the classic pep band “hits,” including “Fire” by Jimi Hendrix. There was a time when Elon’s pep band used to crush that song, but those days seem to be gone now.

Elon’s pep band was serviceable. I’m impressed how many people seem to actually know the words to the fight song these days compared to when I was a student.

JMU Head Coach, Louis Rowe, was wearing his CAA Tournament lanyard and credential for a large chunk of the first half of the Dukes’ game against Drexel. I had never seen that before. At the under-12 media timeout in the first half, one of his assistant coaches smoothly slid the lanyard off of him and placed it in his own suit jacket pocket. I enjoyed that interaction quite a bit.

JMU Head Coach Louis Rowe proudly wearing his #CAAChamps lanyard and credential while coaching. I don’t think I’ve seen that before. It’s fun. I like it. His team’s up 16-10, eight minutes into this one. pic.twitter.com/WCKNzY7nr8