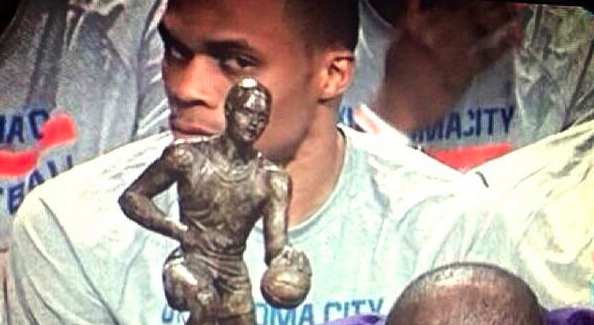 The biggest development early on in this young NBA season hasn’t come as much of a surprise. Following Kevin Durant’s departure for the Bay Area, everyone knew that Russell Westbrook would be in Super Eff You Mode to for the 2016-17 season. He’s done just that, and so much more.

Westbrook is currently leading the league in points and assists. He’s also averaging a triple-double: 38.7 points (lol), 11.7 assists and 12.3 rebounds. The Oklahoma City point guard is attempting more than a dozen free throws per game (12.3) and shooting 44.4 percent on his threes. He’s the league-leader in a variety of catch-all metrics, as well as tops in the NBA in usage rate (40.4 percent) and assist rate (61.7 percent). This means that two out of every five possessions for the Thunder end with Russ shooting, getting fouled or turning it over. It also means that three out of every five field goals made by his teammates when he’s on the floor have been assisted by Westbrook.

DeMarcus Cousins led the NBA in usage rate last season (35.4 percent); the Point God Chris Paul did that same with assist rate — 52.7 percent. Westbrook is smoking both of those numbers, at the moment. This is almost certainly unsustainable, but it’s still really fun to extrapolate these numbers. Oscar Robertson is the only player in NBA history to average a triple-double over the course of a full season — way back in 1961-62 with the Cincinnati Royals.

Robertson’s numbers that year were bonkers, too, but actually trail Westbrook’s through the first three games: 30.8 points, 11.4 assists and 12.5 rebounds. Here’s the thing, though: Russ is doing this on far fewer possessions per game. The Thunder are currently averaging 104 possession per game, which is the second most in the NBA. The Royals that year averaged 124.9 possessions per game — fifth in the league (out of nine teams). Ah, the 1960s. When gasoline cost 27 cents per gallon, America was apparent great (debatable), and playing wildly inefficient and reckless basketball was commonplace. Let’s prorate Westbrook’s numbers over the course of 100 possessions, and enjoy watching your computer catch flames:

I mean, come on. Look at that again. This is ridiculous. He leads the NBA with 27 total transition points, according to the league’s player tracking data, but honestly even in the half-court, teams simply can’t keep Russ in front of them.

Oklahoma City plays their next two games on the road, back in Westbrook’s home state: California. On Wednesday night, they’ll be at Staple Center to take on CP3, Blake and the Clips, which should be a lot of fun. The following evening, Thursday in Oaktown, the Oracle (pardon me, ROARACLE) will be lit (or whatever the kids are calling it these days) for when Russ takes on Durant and his new squad, the Golden State Warriors. Watch these games, both are nationally televised. You won’t be disappointed. I promise.

Unfortunately for Hornets fans, Charlotte will take on OKC just twice this year — once in January on the road, then again in Charlotte in early April. So it’ll be a while before fans of the Buzz get to see their team take on the greatest show in sports right now. Fingers crossed we get to see MKG guard Russ. That would be wildly fun.