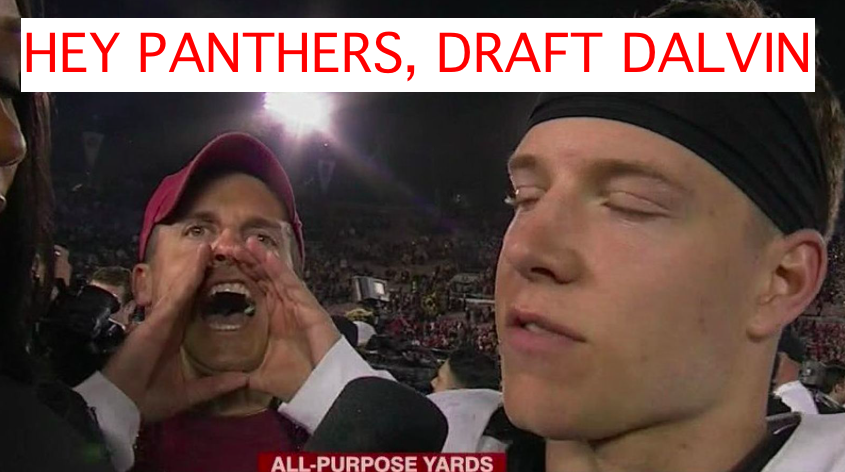 The Carolina Panthers need a running back, and they’ll likely be able to get a good one with the 8th pick in the draft. Two names continue to pop up in mock drafts, and while Leonard Fournette and Christian McCaffrey are nice choices, there are concerns about both that should have the Panthers looking elsewhere.

Fournette is the popular pick because he just LOOKS like a Carolina running back. He’s 6’1”, 230 pounds, and runs with speed and power. He wastes no time in hitting the hole, and his strength alone could easily put the Panthers in 3rd and short on a consistent basis when Mike Shula dials up running plays on every 1st and 2nd down. He’s also spent his fair share of time on the sideline in street clothes which just screams “Panther running back”. But there are concerns as well. Fournette played his college ball at LSU, and Dave Gettleman has to be concerned about how he would adjust to playing for division titles. The SEC has only won 1 national championship over the last four seasons which is a tremendous red flag heading into draft day.

McCaffrey also brings along baggage. He’s considered one of the best receiving backs in all of football, but does that really fit into the power running game? Cam Newton doesn’t often check down to his running backs, rather opting to run for the yardage himself, or standing in the pocket to look downfield while being hit in the head with no flag. There’s also a significant physical concern with McCaffrey. He’s 30 pounds lighter than Fournette, checking in at 200 pounds which brings questions about his durability. There’s also plenty to question about his ticker. No, not his heart, although he did sit out the Sun Bowl while perfectly healthy. His internal body clock. McCaffrey played at Stanford, which is in the Pacific Time Zone. We’ve been told for years by Seahawks fans and Seahawks fans in the media that it’s nearly impossible for a human being to function after traveling from the Pacific Time Zone to the Eastern Time Zone.

That leaves Dalvin Cook. Cook is also a smaller back at 206 pounds, but has been an absolute workhorse for Florida State over the last three seasons. He’s played through minor injuries, and he’s put together some amazing statistics putting up nearly 5000 yards while scoring 46 touchdowns in the Atlantic Division of the ACC, the toughest division in football at any level. Unlike Fournette and McCaffrey, Cook comes from a championship program and is a proven winner. He’s fast, shifty, and will run you over if needed. Cook is also expected to be available towards the middle-to-end of the first round, which means the Panthers could trade down to get him while also ending up with the best running back  taken in the first round.