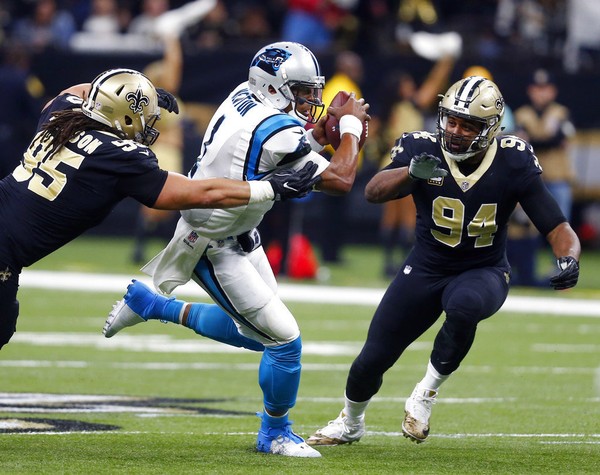 I’m not sure what the decision makers for the Carolina Panthers see when they look at this team. From the outside looking in, it feels like they see a dominant running team with speed on the outside to stretch defenses who load the box, and an impenetrable defense that keeps the other team’s offense on the sideline. Pound the ball on the ground, take a few deep shots a game, and win the time of possession battle.

Go ahead, kick a field goal on 4th and short. We’ll get the ball right back anyway. Load up on speed in the slot because we’ll only need a couple of yards after picking up 8 or 9 yards running the ball on 1st and 2nd down, and maybe they’ll break one. Let’s punt from midfield, pin them deep, and then get the ball back inside our own territory. Let’s do all of that.

But the problem is that’s not reality. In reality, the Panthers are a running team that can’t run. Their generational quarterback is being protected by a line that can’t block. He’s passing to receivers who can’t get open. Oh, and when Cam Newton is able to thread the needle and force in a perfect pass, they can’t catch. And, to be totally honest, their defense is below average in the secondary and can’t survive a bad game by their linebackers.

The Panthers are a team of depth players who play against divisional opponents with NFL starters. It would work in the AFC. Hell, it might work in any other NFC division. But not in the South. And what happened last night in New Orleans was so incredibly predictable. The team couldn’t run the ball effectively. Cam Newton was sacked 4 times and hurried out of the pocket numerous other times, and Drew Brees picked apart the secondary for 369 yards. Carolina traded field goals for touchdowns in the first half because of a conservative approach to 4th and short. And it still almost worked.

That’s the most frustrating thing about the Panthers. They have three NFL starters on offense and four on defense, and not only do they go out and win 11 games, they almost win games like last night’s Wild Card game against New Orleans. You see flashes out of their stars, like the 56 yard touchdown pass to Christian McCaffrey, and know that those plays could be happening consistently if opposing defenses were at all concerned about Carolina’s wide receivers. Cam almost won that game last night. Throwing to Kaelin Clay, Brenton Bersin, and half of Devin Funchess.

Carolina doesn’t use their stars to elevate the franchise. They bring in stars so that they can cut corners elsewhere. Cam Newton, Luke Kuechly, Christian McCaffrey … those guys are bandaids. And every year that goes by without a championship means that each of those stars comes back the next season less likely to perform at their peak. One more concussion for Kuechly and his career could be over. One more injury to Cam and he’s hanging it up as well. The clock is ticking on these guys, and the new ownership is going to have to put a competent General Manager in place to build the team so that these superstars are the engine instead of using them as hood ornaments on a car that should be sold for parts.

And speaking of ownership, Jerry Richardson squandered any chance to be the most beloved figure in NC sports history by being a dirtbag, and there are no tears seeing him go. From the players and coaches, though I don’t agree with it, I get it. There are only a handful of humans on the planet who have the opportunity to play a sport for a job, and Jerry Richardson gave each of them that opportunity to do so. I can respect how it would be difficult for players and coaches to see that instead of the office behavior. I’d hope they would, but can understand if they don’t. We, as a society, have a long way to go before we’re truly where respect is a valued commodity, and I’m not about to blame a small group of players and coaches for that. For the rest of us who have not had our lives, and the lives of our future generations changed by an opportunity given to us by Jerry Richardson, we should all say good riddance and hope that his removal is a sign to others that respect is a basic human right. And I do hope that the players understand the chance they have to be torch-bearers for that message once the initial cloud of personal gratitude wears off.