Yet again, Panther fans have taken to the Charlotte Observer website to submit emotionally charged letters to the editor. First, it was Tennessee Mom who wrote about Cam’s dancing negatively impacting her ability to be a successful parent. Then, it was the announcement of the birth of the unmarried quarterback’s child. Now? It’s Panther fan Lang Maddox’s horrible homemade rap video.

Just like everyone else around the Carolinas, I’m extremely excited about the Panthers’ run to the Super Bowl. I’m not so excited, however, about Panther fans like YouTube content creator Lang Maddox posting viral rap videos on the internet. It’s bad enough to make fun of people with speech impediments with her hook “Panther Nation, P-Panther Nation”, but to just so openly flaunt her white culture with wack lyrics like “I look down in my hands and I see this skin of pig” to describe holding a football, it’s completely inexcusable. Musicians are role models, and I hope Lang can take a good, hard look at true hip hop artists like Petey Pablo who do things the right way. How can I even explain Lang to my kids?

Okay … full disclosure … we wrote this one. We’ll see if the Observer has the courage to run it. And we hope to see you at the SportsChannel8 Super Bowl Pre-Game Show at Trophy Brewing on Sunday from 3 to 5PM. 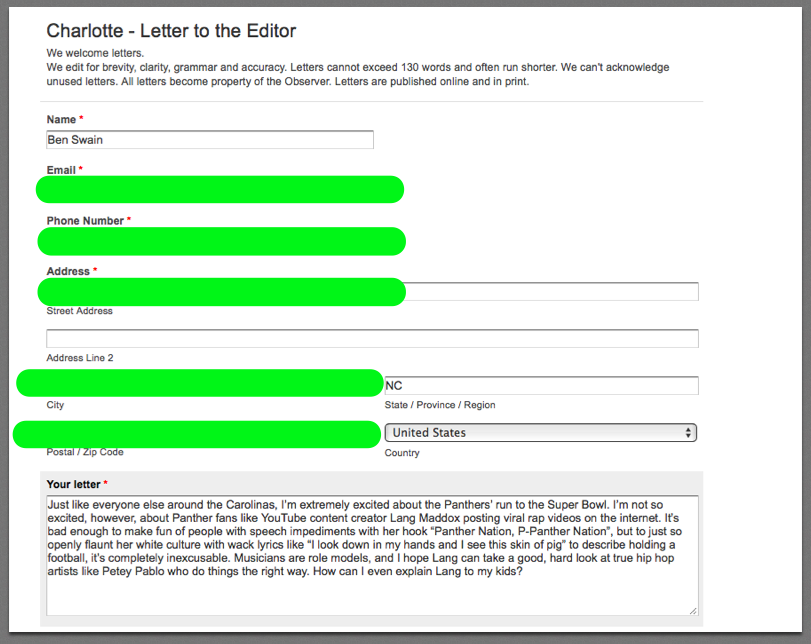