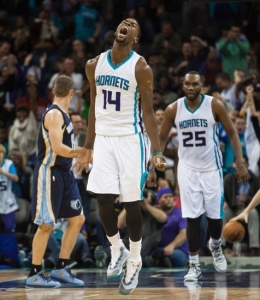 On Saturday evening – October 3rd, 2015 – the Charlotte Hornets’ push to make it back to the Eastern Conference playoffs for the second time in three seasons passed away on the floor of the Amway Center as a result of a torn labrum in the right shooting shoulder of forward Michael Kidd-Gilchrist.

While SportsChannel8 will support the Hornets rain or shine, here’s why their season effectively came to its final rest with the unfortunate injury to one of the brighter young players in the game.

It’s no fun to declare an NBA team’s hopes and dreams deceased during the first freaking week of October, especially those of a squad that possesses a nice nucleus in a wide open East (outside of Cleveland, duh). But the time has likely come in the Queen City to consider the value of #TankForSimmons.

Outside of Kawhi Leonard and Tony Allen, there likely isn’t a better perimeter defender in the NBA: MKG can check multiple positions, and despite some rather blah steal totals, he absolutely makes life hell for whatever poor soul has drawn his assignment.

Joke all you want about his rapidly improving shooting touch (37% on long 2s last season), it doesn’t matter what metrics you use – basic or of the more advanced variety – Kidd-Gilchrist’s value is comically obvious. He missed 27 games in 2014-15; in those contests, Charlotte won only six.

You can bank on these numbers regressing for the Buzz this season, especially with Bismack Biyombo – the team’s lone rim protector from a season ago – now currently playing for , Drake

MKG is also an expert rebounder – one of the best wings in the league at cleaning the glass and not missing a damn spot. According to Basketball-Reference.com, the No. 2 pick in the 2012 draft averaged 9.4 boards per 36 minutes in 2014-15 – a total higher than 7-foot All-Star center Brook Lopez, a notoriously meh rebounder.

Charlotte has some tools to attempt to replace MKG’s production, including a Disabled Player Exception, and the Hornets will likely get some money back from the league – a fraction of his 2015-16 salary (the last year on his rookie deal). But there’s simply no way they can replicate the effort – this sounds corny, I know – and lockdown prowess of Kidd-Gilchrist, who’d quickly become the heart and soul of Steve Clifford’s defensive-minded Hornets.

(Luckily for MKG, he inked a four-year extension with Charlotte back in August, and won’t have to worry about negotiating a new contract while recovering from a serious shoulder injury, which sadly could’ve cost him cash.)

We’ll also miss the opportunity to watch him partner on the wing with Nic Batum (an UFA this upcoming offseason), which is truly a bummer.

If there is one silver lining, though, he wrote half-jokingly, it’s that we’ll get to see more of this guy: PJ Hairston. Right.

All in all, this really sucks. A slimmer Al Jefferson, the acquisition of Batum and the arrival of some much needed shooting (see: Kaminsky, Frank) had folks around the team eyeing 45+ wins and a date to continue playing into April. That, however, isn’t happening now. RIP 2015-16.

Donations and condolences can be made to the Hornets season ticket office (Charlotte jumped to 19th in attendance last season); they’re going to need all the help they can get now.