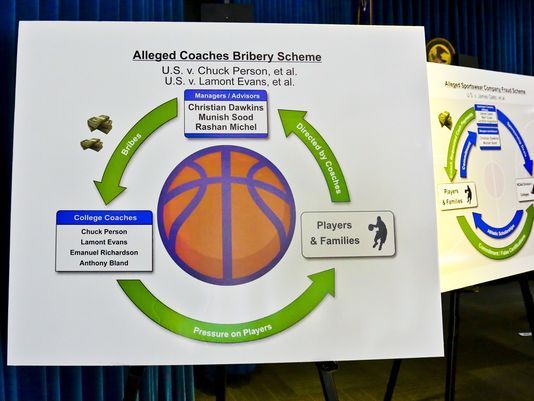 You can’t search through sports Twitter these days without running into countless columns and think pieces on the college basketball scandal and the “corrupt NCAA”. Ever since Yahoo’s bombshell report last week that linked a handful of high profile players to alleged impermissible contact with agents, everyone has thoughts on how to fix college basketball. But the one thing that no one is considering … what if we just embraced the corruption?

Here’s the thing we all need to understand and agree upon. The ONLY problem with college sports is that everyone is getting rich off of them except for the players. That’s it. That’s the only problem to solve.

Instead, we’re being distracted by stories about agents like they’re some horrible disease that’s slowly rotting college basketball from the inside. Going back to the Yahoo story for a moment, if an agent did indeed meet with a high school player and offer anything from lunch to a loan, all for the purposes of trying to sign that player as a client when they become NBA eligible, point to the college basketball problem there. Or the NCAA problem. Hell, point to the problem at all, for that matter. But the main point is this has NOTHING to do with college basketball. Nor should it.

Earlier this season after the first announcement of the FBI investigation, Duke’s Mike Krzyzewski spoke in a press conference about the concept of these athletes going from a business (in AAU) to amateur athletics in college, and then back to a business in the NBA. While his point was that college basketball needs to do a better job bridging the gap between business and business, a pretty significant takeaway is that there are three unique, independent levels where what happens on one level shouldn’t impact what happens on the next.

Not only is it unfair to lump this agent “problem” in with statements about how broken the NCAA is or how dirty college basketball is, it shifts our focus from the real debate about what’s fair for these college athletes. By introducing the NCAA into the agent discussion, we’re EXPANDING the control of the NCAA to things that are completely outside of their jurisdiction. The NCAA ruling that a player is ineligible for being on the business-end of a sales pitch from an agent would be like the NBA suspending a player because his GPA was low in college. Ridiculous, right?

Here’s how we fix it.

First, we need to accept that agents aren’t bad. Following Duke’s win over Syracuse, in a rambling statement where Krzyzewski was simply brainstorming ideas, he mentioned an idea where the NCAA certifies agents to ensure they’re well-meaning and credible, and then allows those agents to work with players to give them sound, professional advice. Sure it was an off-the-cuff idea, but let’s do that. It would mean we’d all need to revisit the idea of amateurism, which Coach K also suggested, to allow these agents to compete with each other for the services of these star players. If an agent is giving Dennis Smith, Jr a $60K loan to earn him as a client, that’s not money that’s coming out the NCAA’s pocket or NC State’s pocket. Why should anyone care that he’s getting it?

Second, we need to scrap this idea of a level playing field. Rules aren’t put in place to take away advantages that some programs have over others. If a program is funneling payments to a player to get them to sign, yeah that’s probably some form of cheating. If an agent or a shoe company tells a player “you’ll maximize your exposure at Kansas/Duke/Kentucky/UNC/etc., so it’s a good idea to go there”, I’m sorry, programs not named Kansas/Duke/Kentucky/UNC/etc. Do better at being a relevant program that benefits star players. The playing field has never, and will never, be level.

The best part of this plan? All it takes to make this happen is that we (the college basketball public) change our attitude towards these evil, despicable agents. Guys … we’re mad right now that professional advisors are working underground to gain access to future billionaires to give them sound advice on how to maximize their earnings. How dumb are we for that? Just embrace the “corruption” and everyone wins. Schools. Players. Fans. Everyone wins.