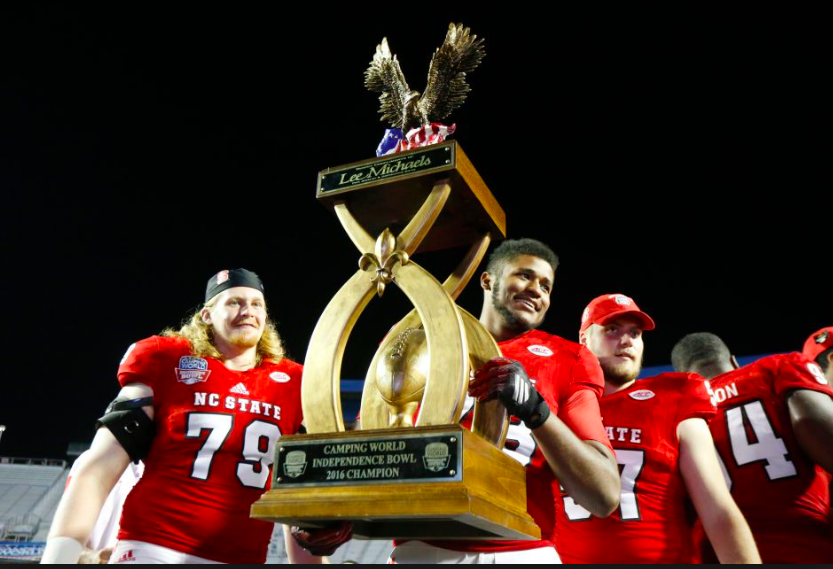 Bovada released their 2017 college football prop bets yesterday, setting the over/under for wins for each of the Big Four teams (minus Wake Forest, because it’s a Baptist school and Bovada is a gambling site). Here’s how they look:

SC8 over/under of how mad fans are about this over/under: Mad online

Yes, Duke missed a bowl game last year, and yes, Duke adds Baylor and Florida State to the schedule this season. But there aren’t any juggernauts in the Coastal, Duke has the best quarterback in the division, and Baylor’s football program is made up of literal human trash and there’s no way the football gods reward them with a win in Durham. The Blue Devils’ defensive line took a hit over the offseason with a couple of key dismissals from the program, but with a deep stable of running backs, the best group of wide receivers Cutcliffe has had, and a serviceable offensive line … our prediction of “irate” may even be a tad bit conservative. Look for Duke fans to feel downright disrespected heading into the 2017 season. Plus they’re still really salty about basketball season. REALLY salty.

SC8 over/under of how mad fans are about this over/under: Captious

The Tar Heels have won 19 games over the past two seasons which is a pretty solid indication that the sleeping giant is wide awake in Chapel Hill. As a matter of fact, it’s been so long since UNC *didn’t* win 7 or more games, most fans weren’t even fans yet the last time it happened (2014). There was significant turnover in the offseason, however, with Mitch Trubisky leaving early to become Mitchell Trubisky, three running backs gone, and three wide receivers gone. Larry Fedora has built a solid resume as a recruiter over the past few seasons, and even though on paper it may look like UNC will take a step back (don’t make a paper class joke), Brandon Harris could come in and put up big numbers in an offense that seems to be fairly interchangeable. The Heels struggled a little bit to carry the target on their back a year ago, but this team just always seems to be at their best when they’re hunting instead of being hunted. There’s strong division among UNC fans right now with some expecting the dominance to continue, some expecting the bottom to fall out, and some not even reading this because they’re still mad about a joke we made after the NCAA championship game.

SC8 over/under of how mad fans are about this over/under: Cautiously pleased

SC8 prediction: Under (scared to death)

It’s all right there for the Wolfpack. Most everyone’s back from last year. Some tremendous opportunities in the non-conference schedule. A surging belief around the program that State can compete with anyone. It’s all there. At any other program in the country, that’s cause for extreme optimism. But this is NC State. The Pack should be able to win 8 games in their sleep this year, but history says otherwise. Hands down, NC State has the best roster in the Triangle, but who’s more likely to end up in Charlotte at the end of the season? The Wolfpack? Or either one of UNC or Duke? This should be the year for Dave Doeren, and there’s nothing that makes State fans more nervous than that.

We didn’t forget you, Wake Forest. Unlike Bovada.