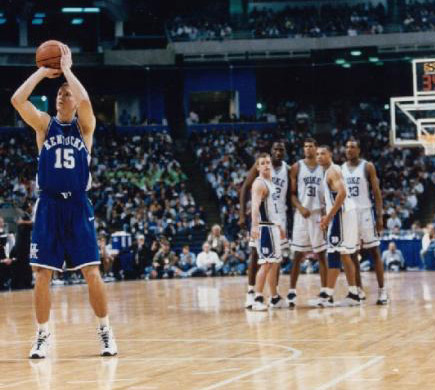 It should be another great year for hoops in the state as Duke shoulders the mantle of preseason #1, UNC returns a ton of talent from a team that made the finals last year, and NC State has perhaps the nation’s most exciting player and plenty of pieces to go with him. We’ll see if Wake Forest can follow the lead of their football program and make meaningful progress, and there are always programs like Davidson, UNC-W and High Point who could be contenders in their conferences.

We thought we’d start the season with a broad look at college hoops on the national scale. Matt Jones of Kentucky Sports Radio was kind enough to give up watching Monday Night Raw for an evening, so we paired him with our Ben Swain. For the past decade, not many people have spoken to and for the fan bases of Kentucky and Duke better than Matt and Ben, respectively, and with those two schools once again topping the preseason list, we thought they were the perfect pair to discuss hoops.

In part one we focus on the general “state of the game”–scheduling, pace/style of play, recruiting and more.

0:00 – introductions. These run a little long. Deal with it.

5:15 – Hayes butters up his podcast partners because we don’t pay them

5:50 – Matt and Ben discuss the wild ride of how they came to do what they’re doing.

7:30 – Matt talks about how close he came to running for Congress and going to “congressional boot camp”

9:15 – Swain knows he’ll have truly arrived when Calipari calls in Adrian Wojnarowski to write a hit piece on him.

12:55 – we talk scheduling–college hoops has been playing more marquee games early in the season

16:20 – not necessarily a new take, but Matt makes a pretty compelling case for why Duke should play more big home-and-homes.

18:00 – Does Duke’s “we play games for our alumni in big cities” argument still work? Or is TV all that matters?

20:00 – we talk rules: did the new shot clock help? do we have the freedom of movement we want?

22:45 – Matt and Ben are naming names on teams and coaches they think are making (or made) the game ugly

26:00 – Matt likes the trend of teams with good offenses (as opposed to the defensive stalwarts) garnering postseason success

27:15 – One-and-dones are a good fit at Kentucky and Duke, are they a good fit elsewhere?

30:00 – Should UNC be trying to play the one and done game or does Roy’s system work for him?

33:00 – Has Roy even been successful at UNC? Matt tries to convince Hayes he has not.