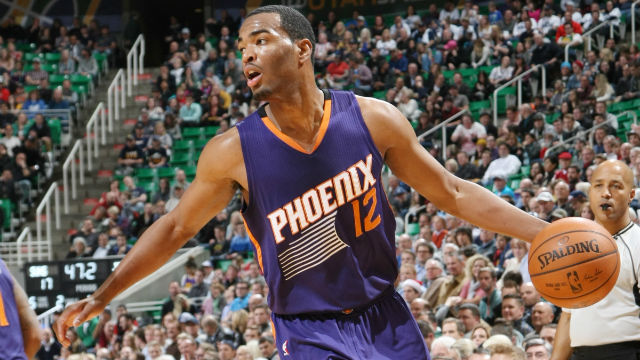 It isn’t bold to say that last season the Phoenix Suns were a bit of a disaster. They won just 23 games, the fourth-worst record in the NBA, injuries to guards Eric Bledsoe and Brandon Knight (sup, Kentucky?) robbed the team of two of their best players, and the firing of coach Jeff Hornacek — a month after two of his assistants were canned — played out curiously. There were, however, two bright spots: Devin Booker (sup, Kentucky?), and before his injury, T.J. Warren.

As a rookie, Booker, on a bad and injury-rittled team, was forced into a role he probably wasn’t quite ready for: 23 percent usage rate, 11.4 field goal attempts per game. He excelled, though, and was the fourth best rookie in the NBA last season — in an absolutely loaded year for the freshmen class.

While he was only able to play in 47 games last season, due to an unfortunate right foot injury, Warren put forth a sophomore season that saw both his role and game expand. While Warren’s field goal percentage slipped moderately (52.8 to 50.1 percent), his true shooting number stayed almost the exact same: 55 percent. This is because his started shooting three-pointers at a higher rate.

During his rookie season, less than one out of every 10 of his field goal attempts (9.8 percent) came from beyond the arc. Last season, though, his three point attempt rate jumped to 16 percent. Warren is far from a high-volume shooter from distance, but he did attempt 1.5 threes per game (3.2 per 100 possessions). He also connected on 40 percent of those attempts, which is pretty darn good. What’s especially promising, though: he shot 17-of-38 from the corners (44.7 percent) — one of the most efficient shots in all of basketball. 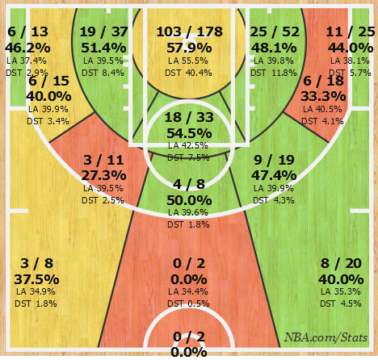 Warren doesn’t even need to become a sniper from the perimeter; in fact, I’d argue that he just needs it as an occasional weapon to keep defenders honest and help his team space the floor. Tony Buckets is so damn crafty off the ball, cutting along the baseline, looking for higher percentage looks. Not everyone has to be a shooter, and Warren is so good at knifing into the paint and finding ways to get off his patented floater. That’s how he’ll earn his keep. The long ball is just there to balance it out.

For what it’s worth, though, Warren shot 25-of-60 (41.7 percent) on catch-and-shoot threes, per the league’s player tracking data. He also get better from distance as the season went progressed, too. Here’s his breakdown by month:

Warren was especially good shooting the ball in the month of November; he connected on half of his threes, shot nearly 82 percent from the free throw line, and ridiculous 57.1 percent from the field — which equates to an incredible true shooting rate of 62.1 percent. This would’ve ranked in the top 10 in the NBA last season. Here’s a look at his shot chart from that month: 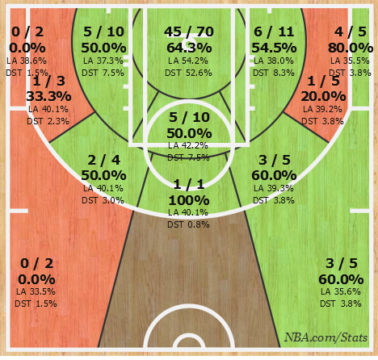 If you remember Warren from his days at NC State, those zones from just outside the restricted area that are lit green won’t surprise you — yes, his floater game is still very strong. Over the course of the whole season, Warren shot 52.1 percent on driving floaters, according to the league’s tracking data.

During November, the Suns scored 106.2 points per 100 possessions with T.J. on the floor, which would’ve ranked as the No. 7 offense in the NBA in 2015-16. Phoenix was a hot mess on offense last season, especially when they had to function for stretches of time sans Knight, Bledsoe and Warren. However, it’s worth pointing out that the Suns were a more efficient unit with Warren on the court.

It doesn’t matter the source — if you check Warren’s plus-minus numbers from a season ago, they leave plenty of room for improvement. Among small forwards, T.J. finished 62nd in the league last season in ESPN’s Real Plus-Minus (-2.42). According to Basketball-Reference.com, Warren posted a defensive box plus/minus of -1.3. Here’s the thing, though: he’s a very young player, who has spend the entirety of his career, especially last season, playing for crappy teams. Phoenix has gone just 31-56 in Warren’s 87 career games. T.J. already has 3.3 career win shares, which is 12th most among players drafted back in 2014. He’s produced that number while playing fewer career games (87) than everyone ahead of him on the list — save for Denver’s future star center Nikola Jokic (80 games).

It also bodes well for Warren that in his brief D-League career he absolutely dominated; in nine career games on that level of competition (2014-15), Warren scored 26.8 points per game on 54.4 percent shooting. In his first ever D-League game, Buckets went for 40 freaking points. It’s problematic when first round picks don’t produce in the D-League, and that’s not at all a concern with the former ACC Player of the Year.

Warren is a ball-mover, he doesn’t get sticky with it, and he frequently functions away from the ball, but a slight improvement as a passer would go a long way. T.J. has averaged just 0.8 assists per game for his career, and he had an assist rate of  7.2 percent. These are paltry numbers, and an area where some growth would be welcomed. He could also get to the free throw line a little bit more, too. He averaged fewer than three attempts from the charity stripe per 100 possessions last season, which needs work. The more he gets to the line, the more efficient he becomes.

Warren is averaging nearly 12 points during the preseason this year, which is fine, although he’s yet to make a three, which is less fine. He has, however, gotten loose for some pretty nifty baskets on cuts and taking dudes off the bounce:

And here he is politely welcoming Ryan Arcidiacono to the league. Take solace, UNC fans:

That backdoor cut should bring back happy memories for NC State fans, and give hopes to those who pull for the Suns. Phoenix should be better this season, but they’re far from contending for a playoff spot. The Suns aren’t Minnesota in terms of young talent, but Phoenix does have a really nice collection of players. It will be interesting to see what happen with them between now and the end of next season — there’s likely a trade in their future (Bledsoe, Knight, whomever). Regardless, you can bet that T.J. Warren will continue doing what he was put on this planet to do: get buckets.