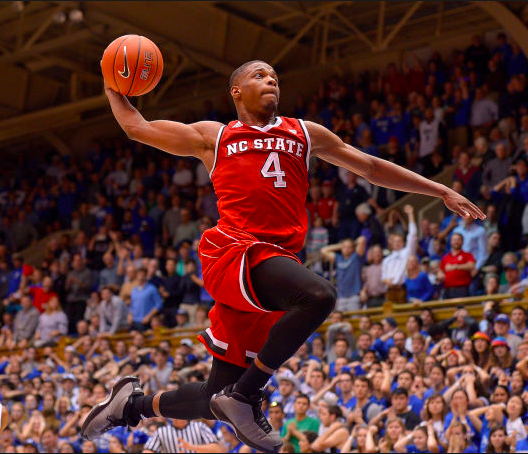 Okay, first of all, “Immedi8 Re8ction” is a stretch. Deal with it.

If you’re mad about the Dennis Smith Jr. dunk, stop watching basketball. And stop doing anything fun. And you know what, just go ahead and stop reading this. I don’t even want your page view. In fact, send me your picture and my man WXMoose will photoshop you into the picture so it looks like DSJ is dunking on you.

what is duke’s problem?

Look, Tatum is going to be an NBA all star, and Allen is going to have a nice career in the league. And neither of those two things may happen for Kennard and Jackson (although I could see Luke Kennard winning six rings in San Antonio), but when it comes to college basketball, those two are the clutch players for the Blue Devils and there’s no question about it. In winning time vs. NC State, here’s how the Duke possessions ended:

11 possessions ending in a shot. 4 by Tatum. 2 by Allen. 2 by Jones. 2 by Kennard. 1 by Jackson. That’s Duke problem. They’re good enough to overcome defensive issues, but if they don’t share the basketball and get shots for their clutch players, they have no chance in close games. And Jayson Tatum has not shown a capability to share the basketball in key situations. If (when) Duke loses in the NCAA tournament, that will be why. And then he’ll get drafted in the top 5 and will lead the way for the next NBA all star to commit to the Blue Devils and it will all (sort of) be worth it.

so i guess duke’s not back?

You could say that.

So I guess duke’s done?

A double-digit seed would be thrilled to see Duke across from them on Selection Sunday. A top 4 seed? Yeahhhhh, they probably would prefer to avoid a team who’s capable of putting it all together for 40 minutes at any given moment.

What about nc state?

What really sucks about NC State’s season is that it might be too late to salvage it, but man, this is the Wolfpack we thought we’d see all year. There probably isn’t a lot of confidence that this game is a “turning the corner” type game, but there’s no reason it can’t be. Mark Gottfried said postgame that he’s still trying to figure out who to play, and I think he landed on a solid option with Ted Kapita in and BeeJay Anya on the bench. With Louisville up next, if State can show the maturity to handle success and find a way to win that game, the sky is the limit.

Duke fans, that cheer sheet was lame. Honestly whoever made it deserved to lose that game tonight. You know what’s funny? This was funny. And it made fun of you, personally.

I made a cheer sheet for Duke. Next time those rapscallions visit PNC, we’re gonna give ’em the ol’ what-for! pic.twitter.com/PTy70C8tly

Hey you know who got all of those really good players you like cheering for, Duke fans? Jeff Capel. That’s who. You know who has a really hard time handling a roster of players who are super-talented but don’t necessarily buy in to the team concept? Everyone. If Duke makes any decisions about Jeff Capel based on this handful of games, they deserve the Jeff Bzdelik experience from whoever they hire instead of Capel. He is the next guy, and you’re not very smart for thinking otherwise. I could not possibly think of a worse overreaction. But woah ho ho … not so fast. I found one!

I seriously feel it is not in Allen’s best interest to play the remainder of the season. He surely is not himself and seems distracted!

Seth. Good lord. Look, I completely understand that your boss is on all of you guys about milking Grayson Allen’s dick dry this season, but there’s so much here. SO much here. Let’s break this down.

“I seriously feel it is not in Allen’s best interest to play the remainder of the season.”

Hey, man I know you want to play in the NBA and all, but you should just sit this year out. Just quit on everything that you’ve worked for because NBA GMs love that shit. You’re a late first round guy right now but, hear me out, if you just decide not to play, those teams in the lottery are going to get nervous about passing on you because every professional team is just dying to pay a lot of guaranteed money to a player who sits out when things aren’t going great.

Are you a f___ing idiot, Seth Greenberg? I honestly want you to explain some kind of justification behind that statement. I cannot think of one possible positive career outcome from sitting out the remainder of the year, just because he’s in a scoring slump and not playing great basketball right now. Maybe I’m giving you too much credit by strongly feeling like you don’t believe that statement, but there’s no chance you really feel that way. Which makes you a clown for saying it.

“He surely is not himself and seems distracted”

O RLY? He seems distracted? Are you a f___ing psychiatrist? Are you going to make another CERTIFIABLY INSANE diagnosis because how did that work out for you last time? Why the hell are you commenting on a player’s mental state? And he’s distracted? YOU THINK? I f___ing wonder why he’s distracted, Seth? Let’s see how much your dumb ass talks about Allen getting tangled up in front of the NC State bench for the next week. F___ you. No wonder all of your players (Thorns, Boggs, Atkins, Garland, Thompson & Finney-Smith) felt it was in their best interest to sit out a season after transferring just to get away from you.

My God, ESPN. Do you even care anymore? Do you have any interest in being good? I’m going to throw this in here because I know State fans have universally blocked Jeff Goodman. 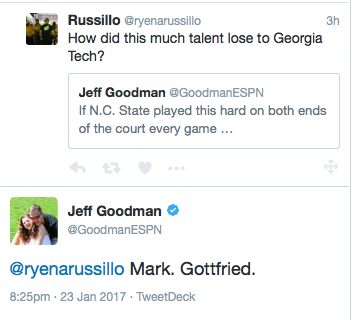 You’re on Gottfried’s dick more than … wait, not going to finish that.