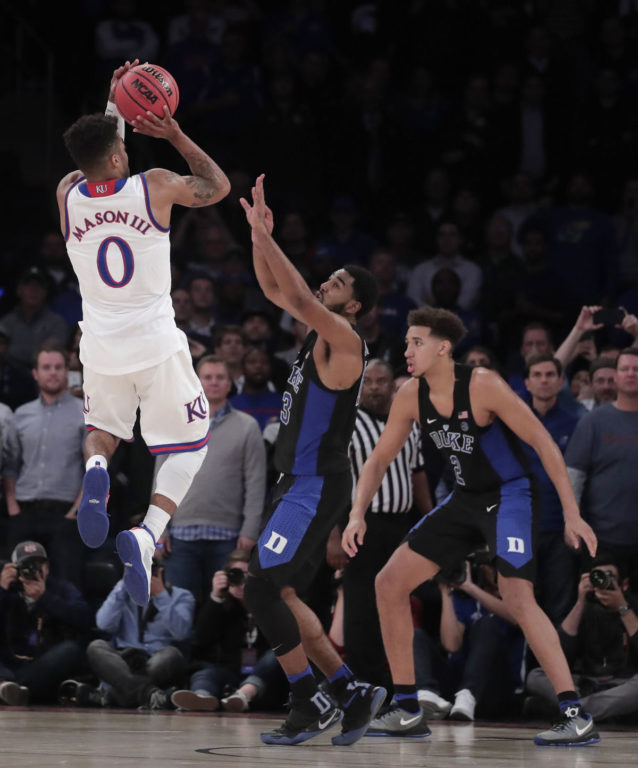 After Big Four losses this basketball season, be sure to visit SportsChannel8 as we #8splain why your team lost and what it means for the season.

Luke Kennard’s 22 points weren’t enough as Duke dropped their first game of the season 77-75 to the 7th ranked Kansas Jayhawks. Here’s why:

There’s no way Duke loses this game with Harry Giles, Jayson Tatum and Marques Bolden available, but the NCAA isn’t going to postpone games waiting for them to get healthy. Duke still has to line up what they’ve got and try to go out and beat teams, and it’s impossible not to wonder if things turn out differently if Jack White, Javin DeLaurier and Antonio Vrankovic log time early in the game. None of those guys are game changers by any means, but does it keep Amile Jefferson on the floor instead of having him foul out? Does Vrankovic get a defensive rebound that keeps Kansas from scoring 2 second chance points? It’s no so much a matter of developing those players for later in the season, but Mike Krzyzewski could have done a better job keeping his core 6 available players fresh and out of foul trouble during the course of the game.

Kansas had 14 offensive rebounds, and in a game where it was difficult for either team to get stops because of the 48 fouls that were called, 2nd chance points seemingly count double. With Chase Jeter not being quite good enough for this level of competition, Duke was forced to play Amile Jefferson at center for a good chunk of the game, and he could not keep Azubuike away from the glass. Much will be said about the scoring left on Duke’s bench with the “big three”, but those guys are likely Duke’s best rebounders too. No one stepped up to fill that void as Luke Kennard led the team with 5 rebounds.

Matt Jones is a nice player, but his reputation as a good on-ball defender is a product of just not being great at anything else. He drew the assignment on Frank Mason III when the entire borough of Manhattan knew that Mason would be taking the final shot, and he did okay to force a jump-shot, but it was a comfortable look for Mason that he converted fairly easily. If he’s on the court at the time, Amile Jefferson is defending Mason and is likely not giving up that clean of a look, and if not Jefferson, it’s Tatum. Either way, Duke’s achilles heel was always going to be an absence of a go-to guy to get a defensive stop when needed. But it certainly didn’t help having the third choice defending Mason in that situation.

Tyus “Stones” was a once in a generation clutch shooter during Duke’s 2015 title run, and while it will likely be another 20 years before the Blue Devils add a third name to that Laettner/Jones list, Frank Jackson showed flashes last night that could prove useful later in the year. Jackson played 30 minutes and finished 3-5 from the floor, but 2 of those 3 makes came in the final 3 minutes. The first was a corner three that ended up as a four point play cutting the Kansas lead from 8 to 4, and the second was a game-tying three with 20 seconds left. Duke really had no business being in the game at the end, but Jackson almost stole one with some clutch shooting.

Not much, if anything at all if Giles, Tatum and Bolden return to the lineup at any point this season.