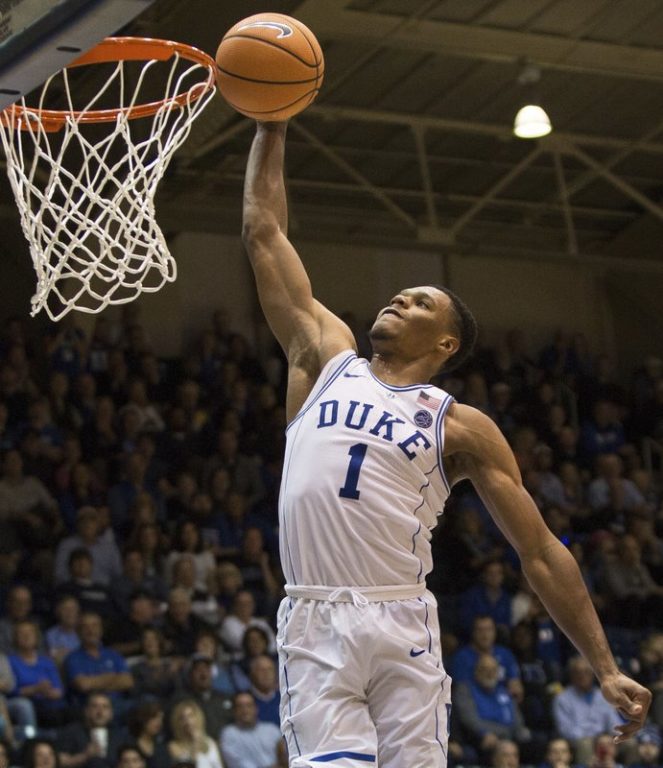 Sharing is caring: Through two games, Duke has 47 assists for 80 made field goals. A season ago, only 47% of Duke’s baskets came from assists and the biggest knock on the offense was a tendency to go stagnant where one player would do work while the other four watched. Duke became easy to defend, and against good offensive teams, they became easy to beat because of it.

While the absence of a player like Jayson Tatum who thrives in ISO situations certainly helps the offense seem more fluid, the existence of a point guard is the biggest difference. When Trevon Duval is on the court, 50% of Duke’s baskets come from a Duval assist. It’s a small sample size for Duval, but Duke hasn’t seen that type of number since Bobby Hurley was running the show. Duval has 20 assists and 1 turnover so far, and if he’s able to keep that ratio on the positive side tonight, it might be the difference in the game.

Run the damn ball: Duke’s made 40 layups or dunks so far this year, which is good for 50% of the production from the floor. They’ve been successful transitioning from defense to offense because Duke’s top 8 players can all rebound, pass, and run the floor. They’re not quite to the Roy Williams level of running on made baskets, but if there’s a missed shot, block or steal, Duke’s out and running. Michigan State has athletes too, but if Duke is scoring in transition without having to play a full possession against a tall, physical defense, that’s a huge advantage for the Blue Devils.

I see you baby, crashing that glass: 7 players are averaging more than 13 minutes per game for Duke, and Trevon Duval is the only player not averaging more than 3.5 rebounds per game. RPG can be a product of tempo, but this Duke team is averaging 10 more rebounds a game than any of the last three teams, including the national championship team. While Bagley’s 10 RPG leads the team, Gary Trent Jr’s 5 RPG from the shooting guard position is equally as impressive. With Michigan State’s size, rebounding from the guards will be critical.

Free throws aren’t free: Duke’s been one of the worst teams in the nation at getting to the free throw line, but maybe that’s a good thing since they’re only shooting 50% as a team. Bagley’s led the way with 9 free throw attempts, only making 2 of them. Tom Izzo has bigs to spare, so expect them to play physical with Bagley and take their chances on the free throw line. If Duke loses tonight, expect free throws to play a major part.

Leeeeeroyyyyy Jenkins: This may be news to most, but Grayson Allen was a bit out of control over his first three seasons. While his competitive fire essentially won Duke a title in 2015, the manner in which Allen attacked the rim over the past two seasons put too much into the hands of the referees. A season ago, Allen had 15 free throw attempts after his first two games. This year, he has none. For Duke to beat Michigan State, a calmer, cooler, more collected Allen will be critical, even though the moment seems to call for the senior to take over.

Don’t reach, Young Blood: In game 1, Wendell Carter went to the bench with two early fouls. In game 2, it was Trevon Duval. Duke doesn’t have a lot of depth, or better stated, Duke starts 5 first rounders and doesn’t have that level of talent on the bench. Bench scoring has been atrocious for Duke so far, so to have a chance at a big win against the #2 team in the nation, the starters are going to have to be on the court, and will have to be effective. Fouls will come, but as long as they’re not cheap fouls, the starters can get the bulk of the minutes.

Lights are on, ______ is on: As our friend Joe Giglio loved to say, when lights are on, Tyus Jones was always on. From an early away game at Wisconsin to an all-time classic comeback at Virginia, the UNC game, and through the NCAA tournament, Tyus Jones made winning plays. Duke is incredibly talented, and uncommonly unselfish. But when the time comes to put the ball in one player’s hands and let him work, who’s it going to be? After tonight’s game, Duke will either have that answer, or they’ll eliminate one player from contention. If they get it right, they’ll win. If they don’t, Duke will likely be looking at a loss.