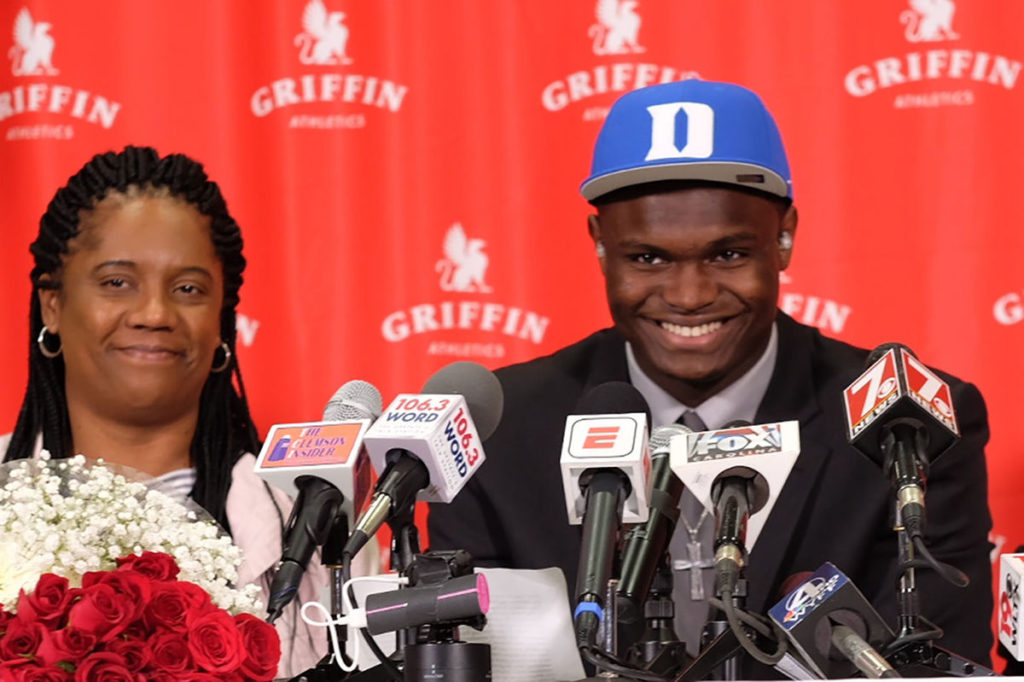 Internet sensation and 3rd ranked high school senior Zion Williamson shocked the college basketball world yesterday by passing on Clemson, North Carolina and Kentucky in order to join Duke’s unstoppable and ever-expanding “Brotherhood”. There’s a lot to unpack from that statement, so let’s break it down into digestible pieces:

Zion williamson as a player

As we’ve seen with local internet phenoms like JamesOn Curry and Seventh Woods, highlight reel youngsters don’t typically, if ever, translate into impactful college basketball players. “The next LeBron” gets thrown around so often by YouTube powerhouses as fans flock to see 14 year olds pulling off in-game windmills and tomahawks. Zion’s highlights are so ridiculous that they look like a 23 year old playing against middle-schoolers on a 9 foot rim, and it’s silly to think that he’ll head into the ACC and dominate Sportscenter’s Top 10 in the same manner.

There’s a thin line between star and bust for five star recruits, and at first glance, Williamson is far more likely to be a bust than a star. He’s 6’6” and 272 pounds, and there is not a position in the college game that appears to be a natural fit for him. At Duke, that’s been a positive in recent years. Brandon Ingram and Jabari Parker both put together historic rookie seasons for the Blue Devils because no one could physically match them when Duke had the ball. With Williamson, however, he may not have the handles to use his power against smaller defenders, and he may not have the jumpshot to draw taller defenders out of the lane to allow him to use his quickness.

There’s also a big question about who he’ll be able to guard. Can a 6’6” monster defend ACC-level post players on the blocks? Does he have the lateral quickness to defend the wing? For Duke fans, think of it this way … who would he defend on this year’s Duke roster? Wendell Carter or Gary Trent? Neither would likely end well for Zion Williamson. It’s also a good lesson in recruiting rankings. Yes, Duke has the top 3 recruits coming in next season, and yes it’s the highest rated recruiting class ever. I’m skeptical that the 2019 Blue Devils could stay within 10 points of the 2018 Blue Devils.

On the flip side of those questions, and perhaps the final realization that led Zion to put on a Duke hat yesterday, is the benefit of playing with elite teammates. Cam Reddish and RJ Barrett, the nation’s top 2 high school seniors, are so good in the mid-range game that whoever is defending Williamson will have to make constant decisions to stay on Zion and give up a high percentage jump shot or help off of him and give up a highlight reel dunk from a lob. Scouts have been impressed by Reddish, Barrett and point guard Trey Jones (the #8 recruit in 2018) on the defensive end of the court, so there may also be plenty of opportunities for Zion to get out in transition where every ticket holder wants to see him. In an offense where Williamson is spending a lot of time with the ball in his hands, he’d be much less effective. At Duke, he’ll have the benefit of being a catch-and-shoot (or catch-and-dunk) guy with Reddish, Barrett and Jones doing the heavy lifting when moving the ball around.

While the story locally is all about North Carolina’s reaction to Zion’s shocking decision, John Calipari has to feel like he just took six knee shots right to the groin. For starters, Kentucky was on Williamson the moment his first video went viral. A source close to Kentucky told me that Calipari had felt that Zion would be a Wildcat for the past three years. Drake wore a Spartanburg High School jersey. Williamson seemed a perfect fit for Kentucky in every way. And he chose Duke.

To make it worse, Calipari needed a win the worst way. With his Cats struggling and about to drop out of the Top 25, the one constant that’s kept John Calipari in the conversation among the nation’s best coaches has been his dominance on the recruiting trail. Under Calipari, Kentucky has as many first round NIT losses as National Championships and yet he’s dodged the national criticism that peers like Mike Krzyzewski, Tom Izzo and Roy Williams have drawn since he took over in Big Blue Nation. Why? The perception that, no matter what, any high school player would love the opportunity to be Kentucky’s next NBA star. But what if that perception goes away? What’s left? Losing Zion, a pop-culture icon perfectly suited for Kentucky’s reputation, may finally force that uncomfortable question to be answered.

Williamson’s announcement also left a sour taste in the mouths of Clemson fans, but to a much lesser extent. The Tigers were Zion’s hometown team and seemed a lock for his services heading into his announcement, and it would have been an incredible story and a huge boost for ticket sales and exposure for a basketball program living in the shadow of Dabo Swinney’s football giant. Because of that passion and understanding of college football and high stakes recruiting, it feels like Tiger fans are taking the surprise in stride. What Krzyzewski seemingly did in this situation is what Swinney does on the regular to up and coming programs. This is the 2nd time in 3 years that Duke has snagged an ACC school’s hometown hero, and while this was far less expected, the muted and mature reaction from Clemson fans could not be any different than how Wake Forest fans reacted to Harry Giles picking the Blue Devils.

While North Carolina was never a favorite to land Williamson (outside of UNC message boards), the interesting discussion is why the Tar Heels were never a favorite. A year ago, the lack of interest by Zion would have been pinned on the NCAA scandal that thankfully ceased to exist. Missing on Williamson forces a look at new reasons why a light blue hat wasn’t pulled from yet another five-star’s bag, and the answer isn’t so cut and dried anymore. Is UNC not “cool” anymore? Do NBA hopefuls look at the extended stays of other can’t-miss NBA prospects who chose to play in Chapel Hill? Fortunately for the Heels, they have a pretty good track record on the court to make up for losses in recruiting. In case anyone forgot, they won the championship a year ago.

what is the brotherhood and why can’t it be stopped

I grew up in North Carolina and consider myself to have a solid understanding of all aspects of the Duke/North Carolina rivalry. Not until yesterday when Zion announced he’d be joining “The brotherhood of Duke University” did I know that UNC fans were so bothered by “the brotherhood”.

The Zion surprise is not even close to the legend of the Harrison Barnes recruiting battle. Barnes was the prototypical Duke kid, and the level of confidence felt around the Duke program could not be overstated – right up until the time Barnes started dialing his future team via Skype. There was no such smack-in-the-face to the Tar Heels this time, but there is one minor similarity that certainly warrants discussion. The importance of “brand”.

Just like Barnes’ comments when he shockingly spurned the Blue Devils in November of 2009, Zion Williamson credited brand potential as his reason for picking Duke a little over 8 years later. “When (Coach K) came to my house to meet with my family, it wasn’t just about basketball and what he could do for me in one year,” commented Williamson. “It was how he could build me as a brand on and off the court for the next several years and for the rest of my life.”

So how did Duke go from being on the outside looking in to being an unstoppable brand that allows Coach K and Jeff Capel to saunter into the homes of 5 star recruits and come away on top with a nearly flawless record? The Brotherhood. That’s how.

Look, every school in America has a “brotherhood”. All due respect to Dean Smith and his “Carolina Family”, there is not one program out there that doesn’t mobilize a network of alums to build a lasting, effective connection based on shared experiences, values and identify. Coach Smith may have been the first, no one really knows, but that’s hardly relevant. What North Carolina did, and what Duke does now, is not unique. And apologies for bursting millions of bubbles, none of them are “more real” or “less manufactured” than others. It’s all marketing, but it’s also all genuine.

As one-and-dones began to dominate high school recruiting, Krzyzewski initially struggled to adjust his methods of building that basketball family to include players who wouldn’t be spending four years in Durham. In 2009 when Duke lost out on Barnes and North Carolina was coming off of a national championship, anxiety was high among Duke fans and some even called it the beginning of the end for Coach K. The hottest take at the time was that Coach K was spending too much time on USA Basketball instead of Duke, and that he should choose one or the other. Looking back with 20/20 hindsight, USA Basketball saved Duke basketball.

While most will cite the exposure that Coach K gained from his experience leading the national team – and that should not be discounted as part of his pitch to Williamson was to use him the way he used LeBron James on the national team – USA Basketball afforded K the opportunity to learn how to build a lasting, cohesive family within a group of players who would only be wearing the USA jersey for a short period of time. With Team USA, Duke’s Brotherhood was born. With Kyrie Irving, it was put into production.

In theory, the “once a Blue Devil, always a Blue Devil – no matter how long you were actually a Blue Devil” approach is brilliant. Without a living, breathing example, it’s a t-shirt slogan. Kyrie begat Jabari Parker, who begat Brandon Ingram, who begat Jayson Tatum, and so on. Duke is building an army of NBA stars who serve as the groundwork for the new Duke basketball fraternity. And it’s growing exponentially.

Duke’s “Brotherhood” is no better than the family setting of any other program, but it certainly resonates better among elite recruits than any other. For now. A few years ago, it was Kentucky’s “player first” program. A few years from now, it will be someone else. But for now, it’s Duke, and there are no signs of it slowing down.

Fortunately for everyone not named Duke, nothing is ever guaranteed in college basketball. Winning championships is hard. Just ask Dean Smith who was able to win two championships while coaching an entire wing of the NBA Hall of Fame. Just ask John Calipari who invented college super-teams and has won as many championships as Kevin Ollie. There is no secret recipe to guarantee a championship, and it’s what makes March Madness undefeated when compared to every other playoff in sports.