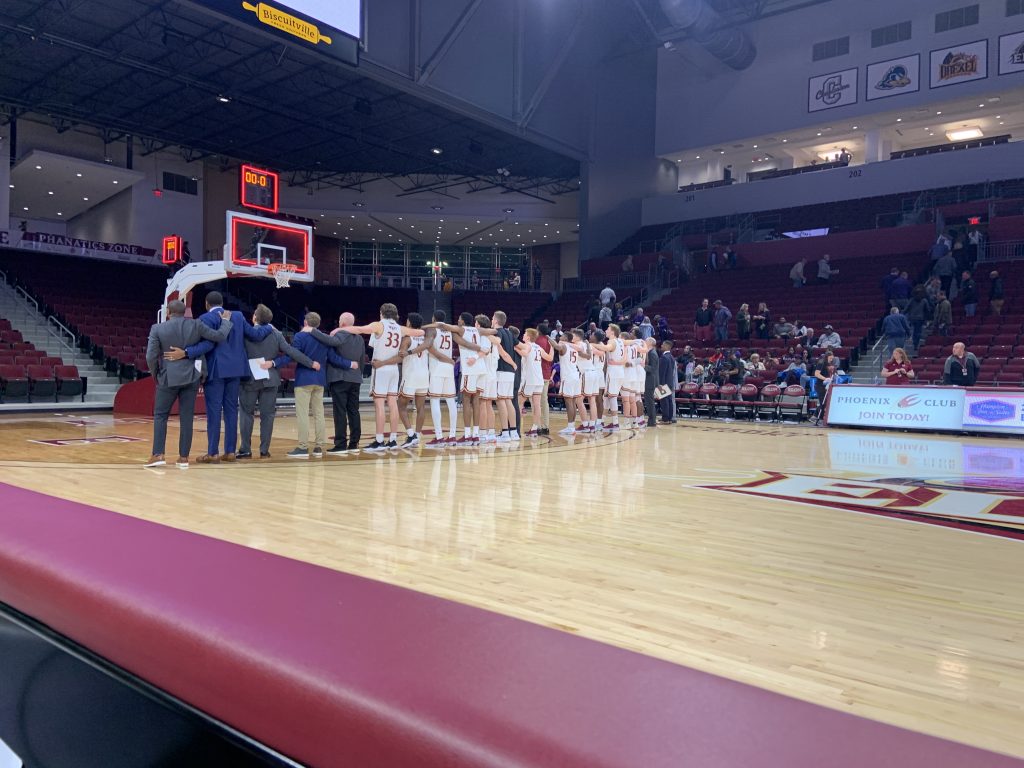 Ignore the “yeah.” Instead, put an emphasis on the ellipsis after it. The “yeah” is just filler, but the pause after the “yeah………” that’s where Elon’s first-year Basketball Coach Mike Schrage made his point after his team’s home loss to Towson last Thursday night.

“Yeah… we just need to learn how to win.”

It was equal parts exasperated, frustrated and – strangely – maybe even a little optimistic. Or maybe that’s just me hearing things.

I’ve been optimistic about Elon Basketball for a long time now. Usually foolishly optimistic. That “we need to learn how to win” trope is an easy trap for the foolishly optimistic (me) to fall into. We heard it an awful lot from Matt Matheny during his final two seasons as Elon’s head coach. Those two seasons featured talented upperclassmen all over the court, including Elon’s best player since joining the Division I ranks: Tyler Seibring. Those two seasons did not feature very many wins. Thus, Matheny was fired.

“You can see it building…”

Fast forward to Saturday afternoon at Schar Center. Elon’s sophomore shooting guard, Kris Wooten, is headed to shoot a pair of free throws after being fouled in the backcourt. James Madison’s Matt Lewis just hit another 3-pointer to cut Elon’s lead to 76-69 with 32 seconds remaining. The seven-point Elon lead is the smallest the lead has been since the score was 22-17 with 6:46 remaining in the first half. You may think a seven-point lead with 32 seconds remaining is safe, but I’m getting nervous. I’ve seen Elon lose this game before, only to have the brutal loss excused by a head coach uttering “we need to learn how to win” (no ellipsis).

Kris Wooten is a shooter who’s not been shooting very well. As he walked to the free throw line, I turned to my neighbor and said “do you trust Kris Wooten to make a pair of free throws here? He’s 0-7 from beyond the arc today.”

Wooten stepped up to the line and calmly buried them both… All net on both. Elon held on the rest of the way and earned an 82-73 win.

“You can see it building… and that’s the truth.”

That’s what JMU’s head coach, Louis Rowe, had to say about Elon after the game. He says he’s watched a lot of film this year and there’s a lot to like about Elon’s young core and young head coach. And did you see it? There was that ellipsis again. A sure symbol of the inevitability of Elon’s winning ways.

A Lesson in the Curriculum

What does “learning to win” look like? On Saturday, it looked like Kris Wooten. The kid from Kinston’s primary role this season has been as a standstill perimeter jump shooter off the bench (he entered Saturday’s game with Elon’s best 3-point shooting percentage: 39.1%). With an 0-7 performance from beyond the arc on Saturday, it could’ve been easy for Wooten to say, “it’s not my night” and give up on contributing to the win. Instead, Wooten managed to make plays elsewhere: two assists, three rebounds, two steals, a blocked shot, an excellent backdoor cut that led to a bucket, and – of course – those two late free throws to help clinch the win. All this while logging a season-high 31 minutes on the court.

Saturday’s win marked the conclusion of the first half of the CAA season. Elon’s record is just 2-7 and the Phoenix’s only two wins are against the conference’s cellar-dwellers: UNCW and JMU. But, as Coach Rowe said, you can see reasons for foolish optimism building. Out of Elon’s seven conference losses, the only one that was out of reach with five minutes remaining was the 27-point loss at Hofstra…

Uh-oh. Did you see that ellipsis just now? Who’s the first test on the back half of Elon’s conference schedule? That’s right. The Phoenix hosts Hofstra Thursday night at Schar Center. What lesson from his “How to Win” curriculum will Schrage teach us next?