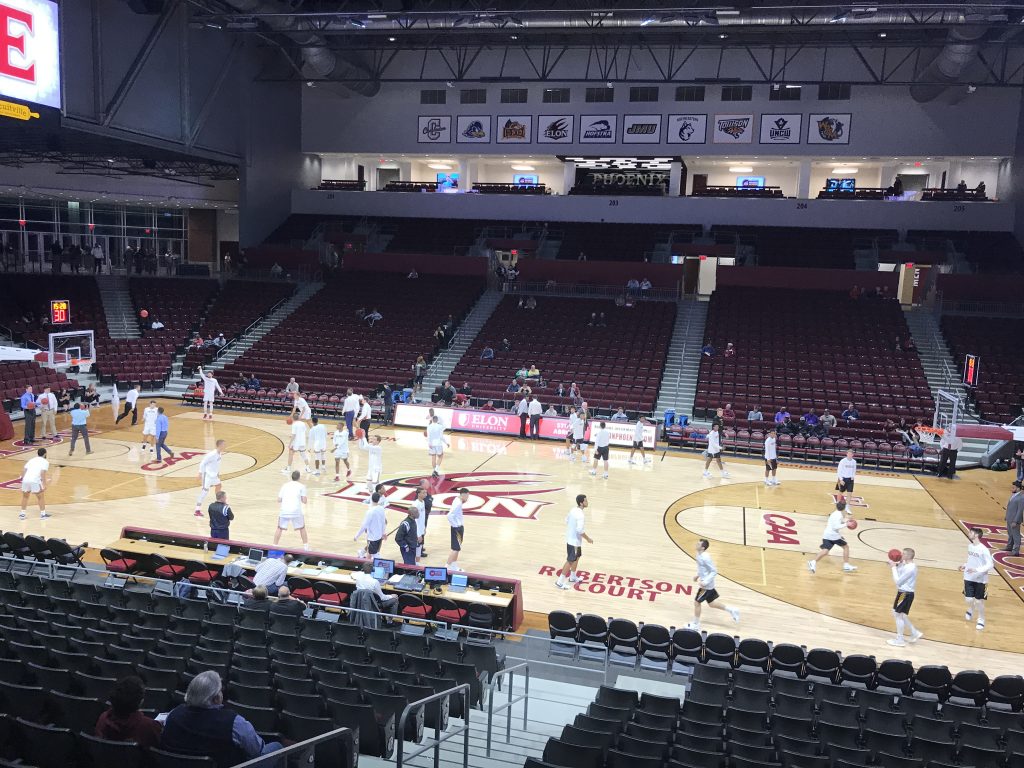 Look… it’s an exhibition game, but Elon #content is important to me. I’ll try to keep this short. Here are 8 things from tonight’s game…

Elon's lead is now 30, with 15:53 remaining and for the third time tonight, Randolph's Coach elects to call a timeout instead of waiting for the official timeout. All this to say that Elon's gone on a handful of nice runs this evening.

With Seibring and Swoope out of the starting lineup, a couple freshmen filled in as starters: Andy Pack and Chuck Hannah. Fellow freshmen, Federico Poser and Kris Wooten, also played plenty, with Wooten getting the 2nd-half start.

Coach Matt Matheny is excited for this year’s freshmen foursome and tonight, they gave us a glimpse at why Matheny says they’re a freshmen foursome that come in ready to play at the CAA level. They combined to score 35 points and grab 21 rebounds, while all playing at least 19 minutes. Meanwhile, the 3 seniors combined for 29 points and 18 rebounds.

Elon had 10 guys play double-digit minutes and got to try out several combinations. Coach Matheny says he expects five players to get consistent minutes at the point guard position throughout the season: Eberhardt, Swoope, Wooten, Seth Fuller, and Nathan Priddy. Matheny also says he’s excited about his depth in the frontcourt, with Seibring, Kundrotas, Hannah, Poser, and Simon Wright all expected to get minutes down low. Many of those dudes have the versatility to play multiple positions, so it’ll be exciting to watch the combinations that are on the court in the early parts of the season.

“When this place first opened, it almost felt like someone else’s court. Now we can definitely say it’s our home court. Seeing it all put together for the first time was an ‘aha’ moment. Every day you find something else you didn’t know about.” -Karolis Kundrotas on Schar Center

“Whatever position coach wants me to play, I’ll do it. I’m here to win. I don’t care what position I play.” -Sheldon Eberhardt on getting the start at point guard tonight. Matheny expects him to be Elon’s starting point guard in their season opener, as Dainan Swoope continues to deal with a nagging ankle injury.

“The way last year ended was one of the worst feelings as a basketball player. We don’t want to experience that again. People have gotten individually better over the summer. People are hungry. We’re out here to prove people wrong.” -Eberhardt on how losing seven consecutive games to end last season motivated the Phoenix during the offseason.

“It feels like a completely new team. New mindset. Different type of confidence.” Eberhardt on welcoming the four freshmen, plus moving to Schar Center

“We have a talented freshmen class; a hardworking freshmen class. Nagging injuries forced some of our veterans out of preseason practices, so our young guys have gotten reps. They’re all ready to play now based on talent.” -Coach Matheny

“It feels like a brand new job. The way we recruit is different. That conversation is different. In a really good way.” -Matheny on Schar Center

Elon will open their season against Manhattan on Tuesday, Nov. 6 before returning to Schar Center to open this building up against the Tar Heels on Friday night, Nov. 9. Heck of an opponent to generate some buzz for the new building. I expect that what was a fairly lackluster crowd tonight will transform into something unlike Elon University has ever seen next Friday night. Is that hyperbole? I sure hope not.

Tonight I learned that we do not say “THE Schar Center.” It’s simply “Schar Center.” Elon SID, Josh Gresh, has promised to give me more on that backstory some other time. I’ll keep y’all in the loop!