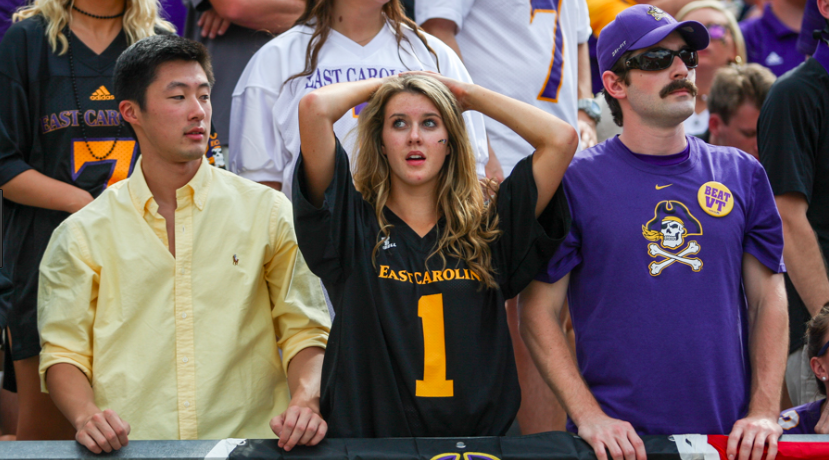 Offseason content is (thank God) finally wrapping up across the college football media world, and while we’re all sick of most of it, ESPN put together a ranking of college football programs by fan happiness. Happiness, of course, is completely subjective, but here’s the breakdown of the methodology they used for the poll.

Here’s how our local teams stacked up:

The Mountaineers ranked high in rivalry dominance and coaching stability, but the biggest boost to their ranking was “Twitter buzz” (79), which no doubt has much to do with beat writer Bret Strelow. We’ve never heard a negative word from or about App State fans, so ESPN seems to have nailed this one.

State fans have a lot to be happy about, as evidenced by high rankings in program power (81) and rivalry dominance (71). Perhaps TOO much to be happy about, however. Hilariously, Wolfpack fans came in with a Twitter buzz score of 9 (out of 100) which is a clear reaction to the social media love NC State is receiving from football media.

Coming off of a national championship in basketball, there can’t be a happier fanbase in college football. UNC loses points for coaching stability and recruiting trends, but come on, is there any fan in Chapel Hill who is unhappy? The Heels should be way higher on this list.

Duke’s pretty solid across the board in the factors that make up this poll, but Twitter buzz is an abysmal 27 out of 100. Duke football fans are probably the ONLY people high on the Blue Devils heading into this season, so that ranking seems to be on the low end. Maybe the Twitter analysis is getting contaminated with Austin Duke’s training camp performance for the Panthers, or perhaps David Duke.

Bruh. Have you ever met a happy Wake fan? Legitimately the angriest fanbase in college athletics. No way they crack the top 100 here. Show your math, ESPN.

Charlotte ranks low in almost every category, which is understandable with how bad their MLS expansion bid is.

Coming off of a UNC national championship in basketball, there can’t be a happier fanbase in college football other than the Tar Heels themselves.