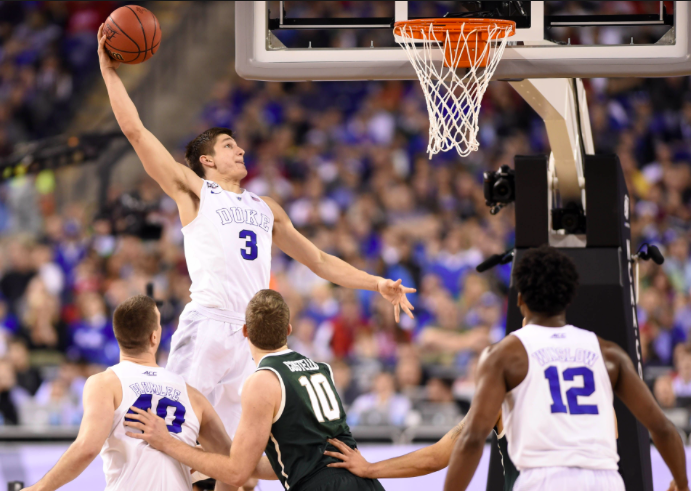 Duke’s Coach K held his annual pre-season press conference today at Cameron Indoor Stadium, and while the Hall of Famer spent most of his time on an eloquent and well-reasoned speech on the state of college basketball, he also touched on the 2017-18 Blue Devils. We fact-check some of his most memorable statements below:

True. A season ago, Duke’s Grayson Allen was a click-machine for anyone and everyone. If you weren’t screen-capping Duke games to gif anything that looks like an Allen trip, shove, or flying kick to the head of an assistant while jumping into the bench, you weren’t watching college basketball correctly. This year’s story is Grayson Allen Redemption Season, which isn’t anywhere close as compelling as America’s Most Hated Player. You have your work cut out for you, Stephen Broome. But seriously, congrats on becoming the first college program to top 2 million Twitter followers.

Jack White has a brother Ben and a sister Emma, meaning he’s the only member of his family not named after one of Ross’ relatives on Friends

False. Shout out to my multiple followers who pointed out that Ross’ Dad is Jack Gellar. Mrs. RACHEL White named all three of her kids after Ross’ dad, son, and ex-wife. Nothing is more White than that.

Freshmen have been working on how to communicate w/ each other. Acknowledging good plays. Reinforcing roles. Lesson learned from last year?

Inconclusive. Duke definitely got off to a rocky start a season ago when the injured freshmen started filtering back into the lineup, and a lot of it could have come from an inability to communicate and align roles within the team. Personally, I think it had more to do with defense and rebounding, but it’s 100% true that Duke didn’t have a leader on the court at the point guard position. Trevon Duval has the tools to run a team, but as Krzyzewski said, it’s a tough transition for freshmen coming from high school and AAU where everything revolves around them, and taking those attitudes and meshing them into a team. If Duke does that well, they’ll be successful.

🚨 K mentions the possibility of playing a zone 🚨

True. You don’t have the tallest roster in recent memory and not play some zone. Duke was a bear when they ran a 1-3-1 with Brandon Ingram at the point, and I’d expect to see them try that again with Marvin Bagley, Wendell Carter, and even Marques Bolden in that role. Bolden, if you remember, single-handedly shut down Miami’s pick and roll with effective hedging. K also mentioned Javin DeLaurier’s ability to defend the perimeter, which he promised would happen. Defense was not a strong suit last year, so something is going to have to change. Expect to see many looks from Duke throughout the year.

True. The core of K’s “rant” on college basketball was that it doesn’t fit in with what happens at the AAU level. The simplified point was that shoe companies have access to kids in high school and that most of it is on the up-and-up when it comes to NCAA rules. Those rules were all put in place to keep pace with the ever-changing tactics by shoe companies to get connected with their future stars. 99% of the tactics are legal by NCAA standards, and it’s up to the schools to make sure the 1% doesn’t get into their program. In some cases, like the ones being investigated by the FBI right now, the schools are involved in the 1%.

So how do you fix it? K doesn’t have an answer. But he strongly feels that players deserve compensation, and that the NBA, NCAA and shoe companies should work together on a solution that’s good for all involved, especially the players and their families.

True. As evidenced by this highlight from today’s Instagram Live broadcast.

False. I mean, I HOPE so because I really like Javin DeLaurier. But K is K, and I’ll believe it when I see it.

The silence on this is deafening.