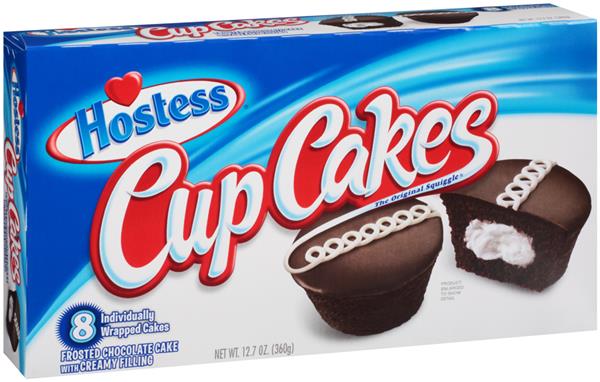 Do you guys remember when we were growing up and the teachers would bring in a TV cart so we could watch Duke vs. North Carolina during class? What do you mean they never played on a weekday during lunchtime? Isn’t that when the best rivalries are played?

What ACC fans all DO remember about lunches back in the day were those delicious cream-filled Hostess chocolate cupcakes. There were lots of cream-filled snacks back then, but the cupcakes had an elite textural component that made them great. Obviously, you had the gooey cream filling that was a perfect consistency a little firmer than a donut filling, but not too firm so that you lost the ooze factor entirely. Then you had the chocolate iced top that not only gave the bite a surprising crunch, but it also came with an elegant swirl of white icing to enhance the presentation. But once you got past those two levels, you were left with dry, tasteless cake that had little, if any, redeeming qualities.

That type of layering is typically how the ACC standings pan out, and 2018 is no different. What IS different is that the drama is typically reserved for the iced cupcake top when it comes to deciding who gets the top seed in the ACC Tournament. That’s all wrapped up now thanks to Tony Bennett – a guy who probably opted for rice cakes as a snack over Hostess cupcakes anyway. The creamy filling is where it’s at this year. And the competition isn’t for ACC seeding. It’s for NCAA inclusion.

Oh, and then there’s Notre Dame. Let’s talk about the Irish for a moment …

Back to the cream filling, though. Using a variety of data sources, the “magic number” is the number of overall wins a team would need to feel comfortable about making the tournament. Again, a team could make the tournament by winning fewer games, or could miss the tournament by hitting the number. But it’s the number of wins where it’s safe to hold a bracket watch party. Remaining games are broken out by tier, and by location, to show how difficult, or how easy of a path each team has.

The cream filling of the ACC has a combined 52 games remaining this regular season. 14 of those games are against the top three of the league. 13 are against the bottom teams. With 22 games against each other, there’s an incredible amount of movement that will happen between now and Brooklyn. Who has the easiest path? Here’s a look at how the schedule answers that question. 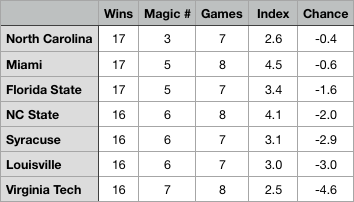 The “index” is a look at the difficulty of a team’s schedule based on who they play and where they play. The lower the number, the more difficult the schedule. Virginia Tech, UNC, Louisville and Syracuse have the most difficult remaining schedules. Miami and NC State have favorable tracks. Florida State is sitting in the middle.

The “chance” takes the magic number and subtracts the index. With so many games remaining, all this metric shows at this point is that each team has work to do to make the field. Obviously the ACC isn’t going to be a 3 bid conference, so for now it’s just a comparison of who needs to REALLY work to get in.

Check out our Brack8ology to see who’s in and who’s out as of today.