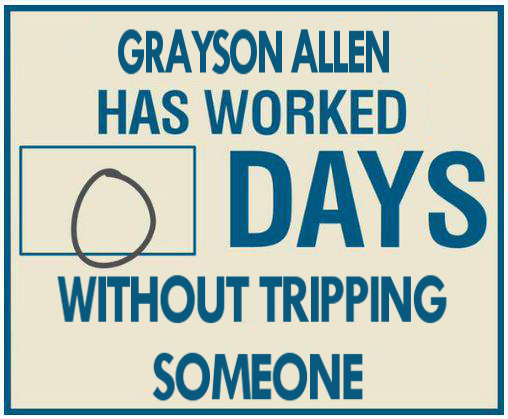 Sorry, “greatest rivalry in college basketball”, didn’t mean to have Duke and UNC upstage your game in Louisville last night. But here we are. The Trip 3 and Notice of Allegations III: A New Hope (for Statefansnation) may sound like holiday blockbusters, but in reality it’s just more of the same from two never-ending stories that we are all exhausted from talking about.

Grayson Allen tripped a guy. Again. And it was very bad. And he KNEW it was very bad as evidenced by the tantrum he threw on the bench after it happened. On a night when every talking head had to chime in about it, only Fran Fraschilla hit the nail on the head by saying “Grayson Allen has a competition problem.” Allen is a player who has had to fight for everything he has, which is very tough to process because he looks like a guy who was born with quite a bit in his favor. There is likely something very wrong inside of his head in a very Waterboy kind of way, but that wrong has also taken him from being a second-tier high school prospect to a pre-season player of the year favorite.

His actions just got him suspended by his coach as Duke has just released the following statement:

Meanwhile on the other side of town, the NCAA is back in Chapel Hill. The third notice of allegations looks a lot like the first one. Men’s basketball and football are back in the allegations, as is the “extra benefit” penalty relating to academic fraud, and the timeline grew to include 2002 to 2011. Oh, by the way, two national championships are included in that time frame. There’s not much more to the story than that. Roy and Larry will continue to have to deal with whispers on the recruiting trail, and UNC’s lawyers likely won’t be spending Christmas morning at home.

What’s nice to see from both stories, however, is the amount of interest that fans and media have in the personal growth of Grayson Allen and the academic prestige of the University of North Carolina. The concern is admirable, and in no way has anything to do with being dependent on the two parties for page views, or being very upset with these two programs for winning a lot of games against others’ favorite teams. ‘Tis the season, I guess. So UNC and Duke fans, there’s not much to #8splain about yesterday. It’s pretty black and white. So just be glad that 2016 is ending on such a positive note, knowing that so many truly care about the mental health and reputation of your athletes and your institutions.