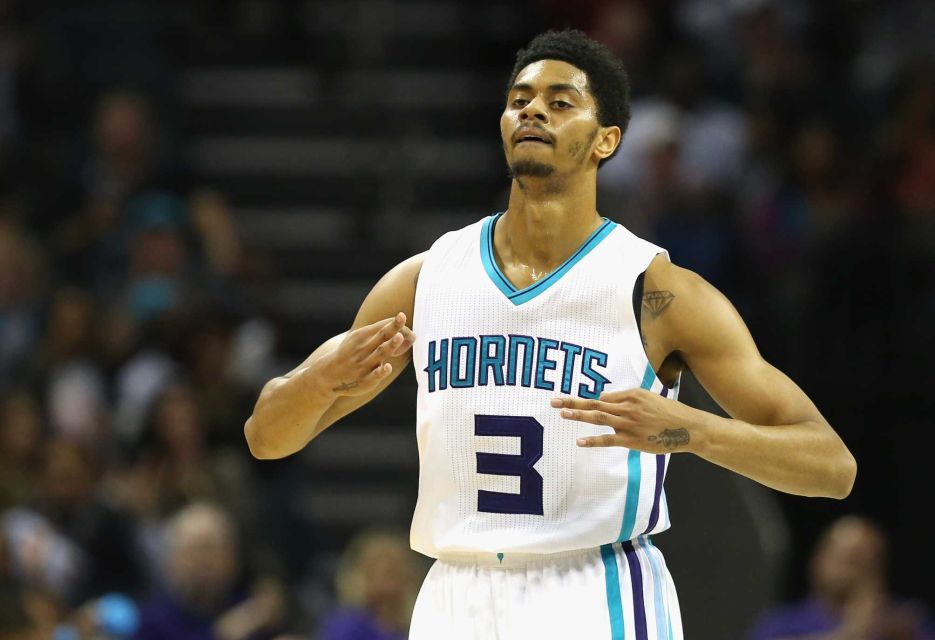 One of the best signings in the chaotic offseason that was NBA free agency, which is still technically in progress, occurred when Courtney Lee inked a four-year, $48 million deal with the New York Knicks. It was a smart, cost-effective solution to a need: a shooting guard who can actually shoot.

The Brooklyn Nets coming to terms with Jeremy Lin on a three-year, $38 million contract (the third year is a player option) gave the franchise their best play-making option in years as the team tries to claw its way out of the Eastern Conference cellar (they still have a way to go: Boston controls their first round draft picks in 2017, 2018).

Lee and Lin were two of the key cogs on a Charlotte Hornets team that won 48 games last season, and ranked inside the top ten in offensive and defensive efficiency. Their absence will be felt as the Hornets attempt to go to the playoffs in back-to-back seasons for the first time since 2002. The two guards brought very different games to the table, but both managed to pair nicely with the team’s franchise point guard, Kemba Walker. After the acquisition of Lee — via a trade with Memphis at last season’s deadline — Charlotte scored better than 1.14 points per possession with Kemba and Lee on the court together, which would’ve ranked ahead of Golden State’s No. 1 offense.

So, now that Lin and Lee have taken their talents to the Big Apple, who will Steve Clifford turn to for backcourt production in 2016-17?

Walker and the recently re-signed Nicolas Batum (another excellent move by GM Rich Cho) will be responsible for generating most of the team’s offense, especially as Kemba’s game continues to evolve. Defensive stud Michael Kidd-Gilchrist is back after missing all but seven games in 2015-16 with a shoulder injury; Clifford is expected to experiment some with MKG as a small-ball four, which is exciting to hear, but he will obviously get a lot of minutes at the three — his natural position. That said, there are still plenty of minutes and possessions up for grabs on this roster, and three players in particular must step-up: Ramon Sessions, Jeremy Lamb, and Marco Belinelli.

This isn’t the first time Sessions will operate as Charlotte’s backup point guard; he played 116 games with the Bobcats over the course of two seasons, making seven starts and averaging 12.5 points. During the first week of July, the Hornets came to terms on a two-year, $12.3 million deal with Sessions — another good value signing by Cho. Sessions will take up around six percent of Charlotte’s cap space next season.

The Hornets weren’t the Warriors or Spurs last season, obviously, but they did become one of the league’s best offenses. Charlotte never turned the ball over, which was huge, and ranked inside the top ten in made 3-pointers and free throws. It was quite the turnaround, considering that in 2014-15 Charlotte ranked dead last in the NBA in three-point percentage. To accomplish this, Clifford leaned heavily on dual-point guard lineups that featured Lin and Walker, who played 1,178 minutes together last season.

The Hornets will certainly rely on this offensive setup again in 2016-17, and results from years past should inspire some confidence. Walker and Sessions shared the court for 500 minutes during the 2013-14 season. Of two-man lineups that played at least 400 minutes together that season, Walker and Sessions had to best net point differential (+8.7 points per 100 possessions) on the team — by a good margin, too (Kemba and Anthony Tolliv3r were No. 2 on that list at +6.0). Walker is a much better shooter than when he and Sessions last played together, which should help the cause. Kemba caught flames and connected on 43.4 percent of his catch-and-shot three-pointers last season, per NBA.com.

Sessions, like Lin, is a known asset with one specific, discrete skill that’s allowed him to carve-out a decade-long career in the NBA: driving to the basket.

It’s phenomenal to have MKG back; he’s one of the best perimeter defenders in the NBA, and his offensive rebounding prowess and cutting should add new dimensions to Charlotte’s offense (Clifford is famously unconcerned with offensive boards, but he will let MKG roam). Unless his perimeter shooting has made significant strides (fingers crossed), though, adding his jumper into the rotation could cramp spacing a bit, which is why having multiple guys that can breakdown defenses off the dribble — attack the rim, move defenders, create passing lanes, hit shooters — is critical.

When Kemba hits the bench, Sessions will be asked to run the team’s second unit offense and score for himself, too.

Even after four professional seasons, including three years spent with Kevin Durant and Russell Westbrook in Oklahoma City, the jury is still out on Jeremy Lamb. We know some things that he can do very well, but his talents tempt far more than they fulfill. Lamb got off to a sizzling start last season — he and Lin did a fantastic job leading the team’s bench offense early on. During his first 18 games, Lamb averaged 12.7 points, 4.8 rebounds, and shot 51 percent from the field (35 percent from deep). He shot better than 52 percent from the floor in the month of November, and produced this beautiful shot chart (courtesy of NBA.com): 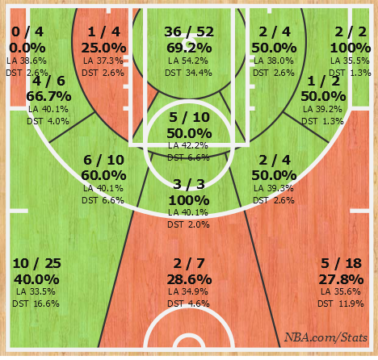 Lamb couldn’t miss at the rim, shooting nearly 70 percent from within eight feet of the basket. All of that is really, really good, but it didn’t last. Lin suffered a malaise in the middle of the season, but he could mostly be counted on for the entire campaign. Lamb, however, saw his shooting regress and plummeted from the rotation. There was a stretch of 10 games in January, as the team struggled, when Lamb appeared in only one contest. After the All-Star break, Lamb played just 14.5 minutes per game — about 10 minutes fewer than he had averaged the first quarter of the season. Additionally, Lamb played only 12 total minutes in the playoffs for Charlotte; in those minutes, the Hornets were outscored by more than 48 points per 100 possessions, according to the NBA’s tracking data.

Much of Clifford’s distrust in Lamb comes from his output on the defensive end. The 6-5 Lamb is still just 24-years-old, and he has the wingspan to develop into a quality defender, but so far, that’s been missing from his game. Some of his defensive numbers are misleading here, though. ESPN’s defensive real plus-minus, which adjusts for the quality of opponents, was extremely kind to Lamb; he ranked fifth among shooting guards in this metric — ahead of Jimmy Butler, Victor Oladipo and Andre Roberson.

This is one of those rare times, however, where the numbers don’t exactly reflect what we’re seeing. Lamb routinely got lost in space off of the ball, and more importantly, routinely smoked in pick-and-roll defense — a no-no for any Clifford perimeter player. Lamb has an opportunity to earn serious minutes on a playoff team here, but he will have to rebuild confidence with Clifford first.

Charlotte could really use his scoring off the bench. As good as Walker and Batum are, there will still nights when the Hornets will need other wings to provide a punch offensively. Lamb has trouble defending simple actions, but on the flip: he can unlock a defense with his ability to operate pick-and-rolls. Lamb produced 0.97 points per possession as the ball handler in PNRs, which ranked fifth in the NBA among players who carried out at least 130 such possessions. While in a much smaller sample, this puts him among some of the league’s elite: James Harden, Kawhi Leonard, and Chris Paul.

You can see the makings of a damn good young player in Lamb, but this season in Charlotte will be critical in determining how we perceive his talents. Charlotte needs him to produce.

Finally, Belinelli — who arrived in Buzz City thanks to a draft night trade, which saw Charlotte give up a serious asset — the No. 22 overall pick — for the Italian’s services. The transaction was a hedge against Lee leaving in free agency, which ended up occurring. Belinelli has two years remaining on his relatively cheap contract, and should provide some depth on the wing.

After shooting 41 percent on threes during his two seasons with the San Antonio Spurs (he was a member of their 2014 championship team), Belinelli struggled mightily during his one season with the dysfunctional Sacramento Kings: he shot just 30.6 percent from deep (only 29.3 percent on above the break threes). All of his catch-all efficiency stats fell, too, because of course. However, playing alongside Walker, Batum and Sessions should help Belinelli heat back up from distance. His shot will be vital, especially with Lee in NYC now. Charlotte had excellent chemistry last season, too, which should help Sessions and Belinelli matriculate into their new roles.

Winning 50 games and hosting a first round playoff series are reachable goals for the Hornets in 2017, although I’m guessing most prediction models will have them falling a little short of those lofty expectations. If they are to snag one of the top four seeds in the East, the Hornets will need Sessions, Lamb, and Belinelli to be major contributors.