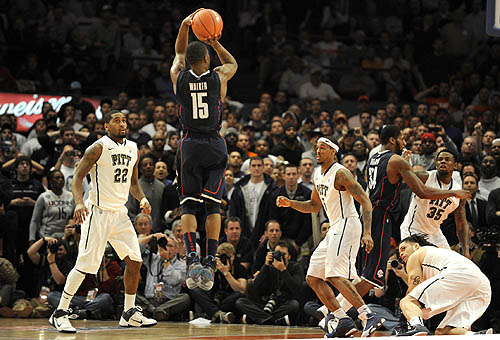 The SportChannel8 crew is up in Brooklyn for the 2017 ACC Tournament. This is, of course, the first time the league has held this event in the Big Apple. New York is also hosting the new Big East Tournament at Madison Square Garden, while the ACC occupies the Barclays Center.

March 10 marks the six-year anniversary of a special moment in college basketball, which happened to involve Kemba Walker — All-Star point guard of the Charlotte Hornets. It seemed like a good moment to pay tribute to The Crossover.

It was on this day six years ago that Kemba and UConn continued their magical run to the 2011 Big East Tournament title with a win over Jamie Dixon and Pittsburgh. In the quarterfinal victory, Walker scored a team-high 24 points, but none were more memorable than the final two.

Following a ball screen, Pitt big man Gary McGhee switched on to Kemba — a moment I’m sure he’d love to have back. What transpired next was magic:

Yo! This is legitimately one of the nastiest crossovers I’ve ever seen. And he sticks the game-winner, too! Seriously, the space he creates by spilling McGhee is colossal.

Of course, UConn won the next two games against future ACC members Syracuse and Louisville. Kemba averaged 26 points per game in that cosmic Big East Tournament run. He followed that up by averaging 24 points, six assists and six rebounds in UConn’s six NCAA Tournament wins.

Back to the future

It’s incredible to glance back, and take note of just how far Kemba has grown as a player. In his sixth NBA season, Walker has soared to new heights: scoring career-high 23.2 points and becoming the franchise’s first All-Star since 2010.

Walker is an iron man, who has missed just one game this season; despite a dearth of offensive firepower and shooting around him, Kemba has raised his game to newfound efficiency levels, including a 40.7 three-point percentage — something that would’ve seemed like a wishful dream two short years ago. Kemba is on pace to become just the 15th player in NBA history 6-1 or shorter to post a PER north of 21. He would join the Chris Paul, John Stockton, Mark Price, Tiny Archibald and Isaiah Thomas.

Ok, enough of the stats; let’s take one more look at this gem.