Rachel Schueller will wake up around 9am on Friday morning in her Tulsa hotel room. She has a long day ahead of her, as her University of Miami Hurricanes aren’t scheduled to tip off against the Michigan State University Spartans until around 8:20pm local time. She may spend some time at the gym, or doing schoolwork, or listening to music. But she says the most important thing she needs to do throughout Game Day is hydrate. It’s important that she avoids any debilitating dizziness or cramps during this evening’s game. Tonight, Schueller, a senior, is playing on college basketball’s biggest stage, the NCAA Tournament.

Schueller won’t be on the court, of course. Her basketball playing days ended long before she journeyed from a small town in Washington to Coral Gables, Florida. She won’t be throwing outlet passes to her favorite player–and Miami’s leading scorer–Davon Reed. Nor will she be along the sidelines helping Head Coach Jim Larranaga draw up plays to free up star Freshman Bruce Brown to slice through open lanes toward the basket. Instead, Schueller will be making her presence felt the best way she knows how: by playing piccolo in the Miami Pep Band.

Over the past four years at the University of Miami, Schueller has become one of the nation’s premier pep band members. She’s won over fans at the Watsco Center (formerly the BankUnited Center) with her sensational piccolo playing, flamboyant dancing, gyrating enthusiasm, and an obvious love for the University she plays for. Outside of the Watsco Center, Schueller has acclaimed fame amongst ACC and NCAA audiences alike. The Tournament setting is Schueller’s true time to shine. A quick Twitter search of “Miami Piccolo Girl” during one of her games will show that she’s capable of capturing the attention of entire fanbases throughout the arena.

“Piccolo Girl” captured our hearts during Miami’s recent two-game run at the ACC Tournament in Brooklyn. Before she shows off her moves at the “Big Dance” one last time, we caught up with Schueller for a Sports Channel 8sclusive.

“I started playing piccolo in 6th grade,” says Schueller, a Marine Biology and Math Double Major at Miami. “I also grew up watching Division III basketball in my hometown and the vibe at those games encouraged ‘active watching.'”

In high school, Schueller decided to combine the skills she’d learned as an “active watcher” of basketball with her piccolo skills and joined pep band.

Schueller was attracted to the University of Miami, a medium-sized school with good sports and a Marine Biology program. “I also looked at Duke and UNC, 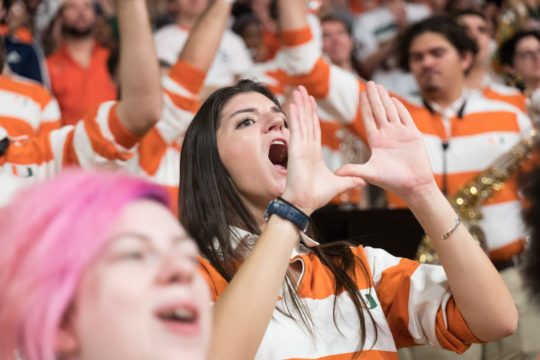 but the weather doesn’t really compare.” While North Carolina’s weather may not compare to Miami’s, at least we’re not Syracuse.

As with many of our greatest sports heroes, Schueller has had to deal with some adversity to get to where she is today.

“The biggest issue has been people who are less enthusiastic that don’t want to stand too close to me because they don’t want the camera attention.” It didn’t take Schueller long to find a happy medium that would keep both her fans and her shy bandmates happy. Her first two years as a member of the Miami pep band went off mostly without a hitch. “For the most part, I like to think I encourage others to embrace their inner super fan.”

But in March of 2015, while Schueller was in Coral Gables, something happened in Pittsburgh that changed the outlook of her pep band career. Top-seeded Villanova lost a game to 8-seed NC State (NC State remains the last team to have beaten Villanova in an NCAA Tournament game). As the game came to an end, CBS cameras showed a Villanova piccolo player crying while playing the Wildcats’ Fight Song for the final time that season.

Shocked at the new nationwide perception of piccolo players after one was caught crying on national television, Schueller decided it was time to step her game up a notch. “The goal of a pep band is to be equal parts pep and band. I felt less bad for [Villanova Piccolo Girl’s] tears. I’m really just trying to get people pumped up because it’s a lot more fun to be at a game where all the fans are really into it.”

We asked Schueller if she thought Villanova’s piccolo player may have been faking the tears so that she could make an appearance on Jimmy Fallon. She refused to answer, instead saying, “I saw that when it happened and of course everybody loves Jimmy Fallon and the Roots.” Schueller also noted that Villanova beat Miami on their way to a National Championship in 2016 and you didn’t see her crying about it.

So for the past two seasons, Schueller has been working to change the perception of piccolo players created by Villanova in 2015. Her dream is to appear on Jimmy Fallon herself and paint what she believes to be a more accurate portrait of the typical piccolo player. “If you have any ‘ins’ with Jimmy Fallon, let me know,” she says.

Do we have any “ins” with the Jimmy Fallon show? Well… we were hanging out with Questlove at the Brooklyn Bowl last week. We’ll see what we can do, Rachel.

Schueller has become well known for spinning her hair as the rest of the band plays “Skin I’m In” by Cameo.

“I’ve always had relatively long hair so one time I just did it and it caught on.” Schueller has continued this antic, despite her body failing her at times. “The first couple games of the season leave me with a sore neck but then I build up the muscles and it’s fine after that.” As for the dance moves, Schueller credits her mom with giving her the courage to “dance like nobody is watching.”

“I grew up around my mom doing a lot of similarly exuberant dancing and I sort of just started doing what felt right to the music. Definitely no training though,” says Schueller, also mentioning that her roommate actually is a trained dancer.

Many “experts” are choosing Michigan State to beat Miami during Friday’s game. Even amongst the folks that think Miami could beat Michigan State, very few seem to believe they can advance past Sunday, with top-seeded Kansas as their likely opponent. It seems that the end of an illustrious pep band career is in sight for Schueller.

We asked her what’s coming next.

“I am graduating in May and pursuing a PhD at the University of Miami in biogeographical data analysis/modeling, but no more band for me,” says Schueller, who just by being able to pronounce the word “biogeographical” is probably smarter than anybody here at SC8. Schueller credits her pep band experience with “shaping who I am in college more than anything else. I have truly made lifelong friends and memories and those aren’t going to disappear anytime soon.”

And when asked what legacy she wants to leave behind for her current and future bandmates, Schueller says, “I mostly just want to leave the legacy that you can never have too much spirit. A lot of people tell me they couldn’t do what I do and that I’m really bold, but I think if everyone was giving all their energy all the time then it would create a really powerful atmosphere at games.”

Here at SportsChannel8, we like to think of ourselves as an organization that never lacks in spirit. We want to thank “Piccolo Girl” for giving us the chance to speak with her and for inspiring us to carry on spiritedly. We salute you, Rachel!