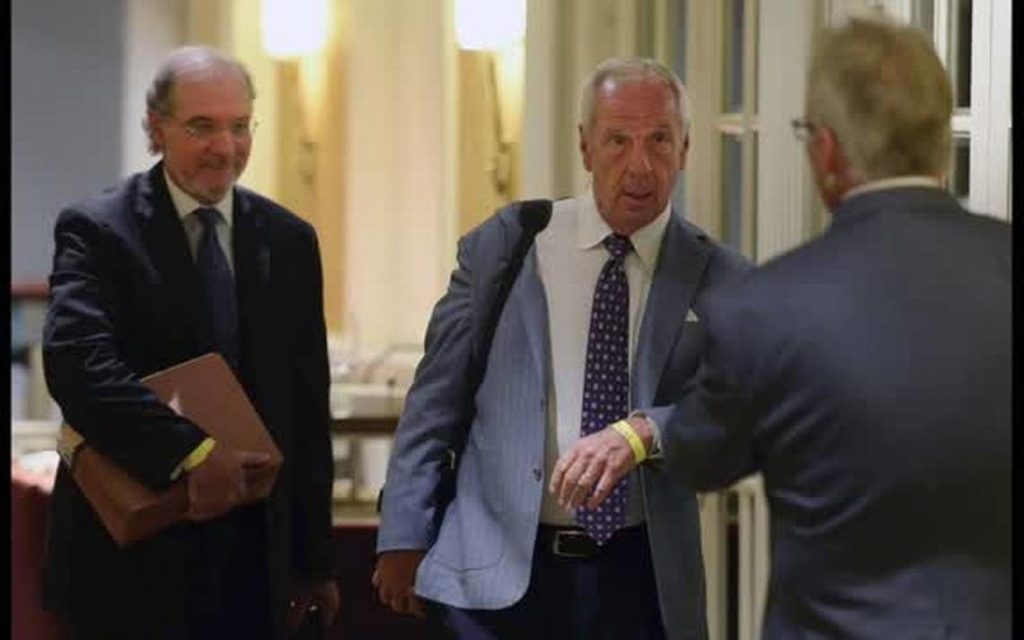 The NCAA will finally reveal their penalties against UNC and the subsequent penalties today after 7 long years. While today will only be the beginning of more delays as UNC is already establishing the framework for an appeal, at least we’ll know what the NCAA is thinking instead of the constant speculation and guessing that’s consumed everyone’s time. There’s no sense in arguing whether or not UNC was guilty, or whether or not the NCAA has the right to even make that decision. We’re past that. Now we’re on to penalties, and here’s what could potentially be included in this morning’s report:

The NCAA will take away wins from any teams ruled to have used ineligible players. It’s the dumbest and most petty of all sanctions, and the excitement that rival fans feel about this punishment shows that it’s not at all about justice, but it’s about sticking it to their Carolina friends.

Wins will be vacated, and it will not impact the actual athletic department in the slightest. UNC fans should be thrilled if this is the extent of the punishment. But they should also act like they’re really mad about it so the NCAA doesn’t look to tack on something that would actually hurt.

A post-season ban in basketball is a big deal, especially these days with one and done being so prevalent. In other sports, it’s more unfair to the seniors who have one last chance at a championship and it ends up being kind of a cruel punishment.

While the easy joke is that football won’t be impacted at all, a post-season ban also means that the school isn’t eligible to receive money from the conference when post-season revenue is split up among ACC members. That’s kind of a big deal.

A post-season ban is less likely than vacated wins, and normally we’d be against the idea of a post-season without North Carolina, but no Tar Heels in Brooklyn means that SportsChannel8 would be the only media outlet from NC to cover the event. That’s good with us. Post-season ban it is.

This one is the killer for all sports other than basketball. A basketball team can win with 8 scholarship players. Football teams and Olympic sport teams tend to die a slow, painful death with scholarship reductions. This is the penalty that rival fans will roll their eyes at while jumping up and down about vacated wins, but UNC fans would be devastated if the punishment includes the loss of scholarships. The NCAA knows this, and they’re clearly about making a petty statement by scheduling this announcement on a huge fundraising weekend, and now on Late Night with Roy weekend. I’d say this is a given in the list of punishments for UNC, and it’s the big one.

Of course all of the above will be appealed, and UNC may have a strong case on appeal so potentially none of this will even stick. So why is the NCAA even bothering with this? Because they have to make a statement. And we think they should get creative with their punishments since they’re going to probably lose anyway …

UNC must declare that it’s either the ceiling or the roof, not both

Let’s be honest. This is the dumbest thing that UNC has ever done, and it so obviously stems from Michael Jordan’s fragile ego that he can’t possibly have just slipped up and said something dumb on national television. But no, UNC is running with it. They run promos during games that end with Eric Montross saying you’re not a true Tar Heel if you don’t know what it means. Sounds familiar …

Spicer on ‘covfefe’ tweet: “The president and a small group of people know exactly what he meant.” https://t.co/URM4mW8pmO

unc fans forfeit the right to complain about officiating

No one – and I mean NO ONE – complains about officials more than UNC fans. Okay, maybe Wake fans. And DEFINITELY Virginia fans. But UNC is a solid third. But the ratio of “complains about calls” and “gets every call” is in the insufferable range, so the NCAA has to step in and fix that with these punishments. A 3-year ban on complaining about anything relating to officials in UNC games, or any game that Duke is playing.

vacate losses where “we just beat ourselves”

The NCAA will go back through all post-game transcripts from UNC losses and will strip the Tar Heels of any wins claimed against themselves for lack of focus, miscommunication, effort, intensity or emotion. Between vacated wins and vacated “we beat ourselves” losses, UNC may not have any results on record for the time period that the NCAA determines.

no cheering in the press box

The North Carolina media won’t like this one bit.

The NCAA will “randomly” select one game from each of the above schools.