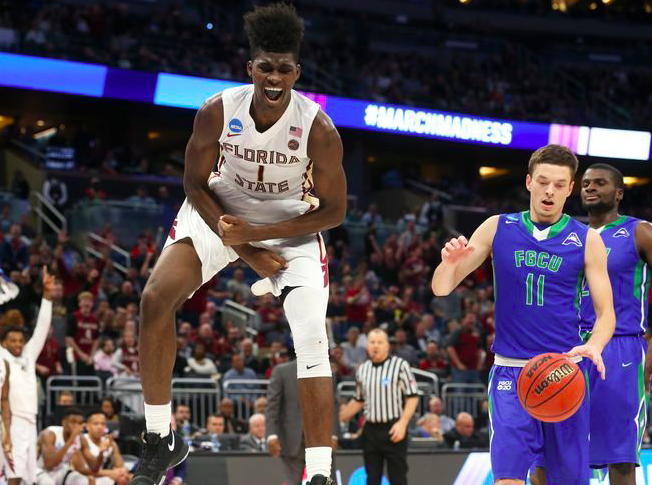 Today is the nerdiest day of the tournament by far as Florida, West Virginia and Virginia are all semi-high seeds but fall in the top 10 of the KenPom rankings. KenPom LOVES these teams. No. You don’t get it. He LOVES them. West Virginia, Florida and Virginia have combined for 26 losses between them, yet are ranked ahead of two 2-seeds and all four 4-seeds. So if you love advanced metrics, today is basically your Final Four.

We’re a little worried about Notre Dame today. After a really poor effort against Princeton where it was clear that Bonzie Colson wasn’t close to being 100%, the Irish will take on Press Virginia and will have to navigate through 94 feet of possession after possession with a really thin, limited lineup. Notre Dame protects the ball better than anyone in the country, and West Virginia takes it away better than anyone, so it’s pretty clear whoever wins that battle is going to win the game. Matt Farrell had a terrible game in round 1, but if he’s able to squeeze the ball today then, hopefully, the Irish can score efficiently and slow the game down into a half-court contest. The biggest weapon against the press will be Notre Dame’s bigs’ ability to pass. Nothing beats a press like a passing big man who can post up in the middle of the court and distribute to cutting guards.

Florida State should have a field day with Xavier. X looked good against Maryland … or was it more Maryland looking bad? But seriously, Florida State should not lose to a team that has 11 losses from their last 19 games, and no matter which league you’re in, there’s no preparation for the length and athleticism of the Seminoles. Unless Xavier’s been practicing against broom sticks, I don’t see them getting many clean looks in the paint, and they rely on getting over 73% of their scoring from 2 point range or the free throw line. Of all the ACC games today, this is the one to be confident about. Especially if the Noles keep the mean streak they demonstrated against Florida Gulf Coast.

Bold move by TNT by putting Virginia and Florida as the night cap. Two top five defenses going at it should make for a low scoring game, but these two teams combined for 156 points in round 1 so who knows. The biggest storyline is that this kicks off a three-game ACC/SEC challenge that concludes tomorrow with UNC/Arkansas and Duke/South Carolina. We beat the hell out of the SEC in football this year, it would certainly be nice to hold serve in basketball.