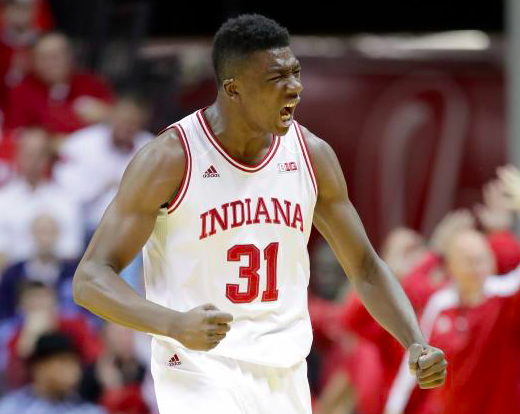 My 8 year old: “Ft. Wayne? That sounds like a school that’s terrible at basketball.”

And he’s kind of right, but the weird thing about that in-state upset is that Indiana didn’t look that bad in that game. And they looked fantastic against Kansas, and did the same again last night against the Heels. Indiana is going to beat a lot of teams this year, and was probably the best that the Big Ten had to offer in this year’s challenge. There’s no shame in losing to this Hoosier squad, who have been collectively fantastic since last year’s Challenge when Duke boat raced Tom Crean’s team in Cameron. It’s pretty crazy, actually. IU media wanted Crean fired a year ago. Then he ended up being Big Ten Coach of the Year and looks well on his way to another such honor this season.

it was a *true* road game

Did you see that crowd? Roy certainly did, and he took the opportunity to slam his own fans in the post-game press conference. One, and maybe the only, chink in the armor for this year’s UNC squad is that no one is naturally bred to step into the role of “emotional leader” left behind by Brice Johnson and Marcus Paige. It showed a bit as Carolina fell behind early in a hostile environment and really failed to ever threaten to catch up. As with most UNC losses, a lot will be said by the media about the emotional or mental reasons for the performance and typically it’s pure deflection from basketball reasons, but Assembly Hall was crazy last night. And that’s tough for any team to handle, much less this UNC team without a Brice or a Marcus to be that rock who feeds off of the energy of the opposing crowd.

Joel Berry is first-team All-America good. He was also 3-13 last night, and that’s not going to get it done against a team as good and as balanced as Indiana. Thankfully Justin Jackson performed up to his potential with 21 points on 13 shots, including a pair of threes in the 2nd half that kept the Heels within striking distance. Jackson is good enough to win a lot of games for the Tar Heels on his own, but in this year’s terrifying top half of the ACC, Joel Berry is going to have to be Joel Berry, and Indiana did a great job of keeping him in check.

Tom Crean did a remarkable job drawing up a defensive game plan to force UNC into being 13-22 from the line.

Every time UNC made a run and cut the lead to 10, or even 8 points, the Heels seemingly wasted the next possession with a bad shot. On the return trip down the court, seemingly every time, Indiana scored at the rim. On the one occasion that the Heels broke through that 8-point threshold, the best shot they could get was a long two pointer by Kenny Williams with the lead at 5 with 4 minutes to play. If the lead gets cut to 3 on that trip, don’t tell me the Heels aren’t winning that game. Instead, James Blackmon hits a three on the other end and gets the game back within that magical 8-point force field.

Luke Maye … no, you maye not

Luke Maye took 21 feet of uncontested shots last night. One was a three pointer that traveled 19 feet of the required 20 feet, 9 inches, and one was a layup that hit the underside of the rim. In no way did Luke Maye cost UNC the game, but come on, how do you not mention those two shots?

what does it mean for the heels?

Not much that we didn’t know already. UNC has a ton of players, but not a ton of depth. Berry and Jackson can carry the team together on any night, but if one is off, there needs to be a spark. And it’s hard to find a spark on the road in a hostile environment, especially when no one has established an ability to provide that personality that Brice and Marcus took with them. The margin for error goes way down when one of the big two is off.