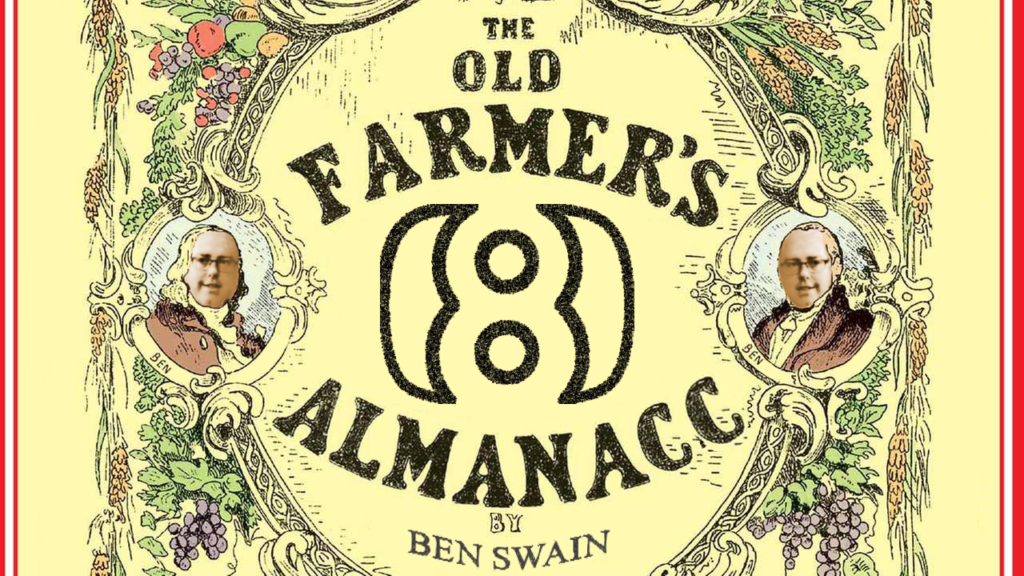 So let’s go ahead and stop it with the Luke Maye is college basketball’s biggest surprise storyline. The UNC junior is having a big-time season averaging just under 20 points per game, but to say you didn’t see that coming isn’t really fair to Luke Maye, and it certainly isn’t fair to Roy Williams’ offense. The Tar Heels are always going to score points, and to score points, you have to take shots. UNC had to replace a whopping 63% of their field goal attempts from last year’s National Championship team, and with Cam Johnson not around to shoulder any of that load (yet), the job was clearly going to Maye’s to fill that gap.

Now if you want to be impressed by how well Maye has filled the role of UNC’s #1 scoring option, that’s a completely different story. But to call him a surprise is just admitting an underestimation of the impact that Maye was always going to have on the Tar Heels this year. He’s a top-tier college basketball player playing in a top-tier offense and deserves to be recognized as such.

In Duke’s loss to Boston College, much will be (rightfully) made about Duke’s defense … or lack thereof. The Eagles started off the game on fire from three point range, with nearly half of their three point attempts coming without a Blue Devil close enough to put a hand in the shooter’s face. But with Duke’s defense still searching for consistency game in and game out, what really killed Duke was the absence of something they’ve been great at all season … offensive efficiency down the stretch. In five come-from-behind wins this season, Duke clawed back in the game each time by getting the ball down low and scoring in paint. With 5:13 to play, Duke took a 3 point lead on a Wendell Carter dunk. The Blue Devils would only attempt two more shots from inside the arc for the rest of the game … a contested jumper from near the free throw line by Grayson Allen, and a driving layup by Trevon Duval with Boston College protecting the arc and giving up the lane. 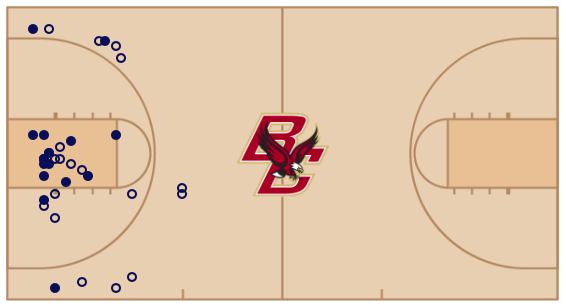 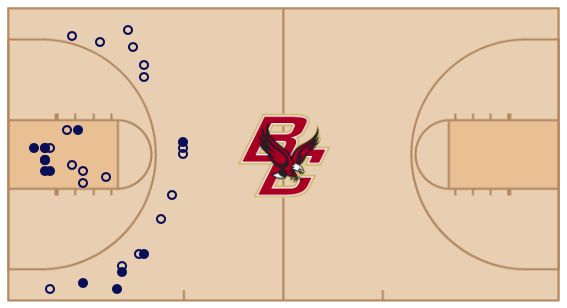 With a 4 point lead with 2:57 to play, Duval took a three pointer only 14 seconds into the shot clock, and Boston College followed it up with a Ky Bowman three pointer to cut the lead to 1 and essentially win the game on that six point swing. Duke’s defense might get better over the course of the season, but the way their offense has played to this point, it may not matter. But what can’t happen for Duke to be successful is for their top-ranked offense to get worse. And there’s no better way to ruin a great offense than with bad shot selection.

Speaking of great offense (and not-so-great defense), Wake Forest scored 109 points against Army last week with six players in double figures. The Deacs attempted 50 shots inside the paint and center Doral Moore scored 20 points in 21 minutes, his sixth double-digit scoring effort in 10 games. Moore has one of the toughest jobs in the ACC in trying to replace John Collins and has struggled with consistency, but a strong Moore means a tough-to-beat basketball team. The biggest concern for Moore? Staying on the court. He’s averaging a foul every 7 minutes so far this year, and his backup Oliver Sarr is … well … not good.

Don’t look now, but there might be a shocking battle for the worst team in the ACC. Georgia Tech was picked by ACC media to finish 9th in the league, but are currently riding a three-game losing streak including losses to Grambling and Wofford. Meanwhile, Pitt has won 4 of 5 games and put together a semi-valiant effort in the 2nd half against non-conference rival West Virginia.

The most surprising team in the ACC to this point is without a doubt Boston College. With upcoming games against 1-9 Columbia, 5-5 Central Connecticut and 2-9 Richmond, the Eagles (picked to finish 14th) are looking at a 10-3 record heading into conference play. By the way, Boston College won’t have a rematch against Duke and only plays North Carolina once. If Jim Christian, who is a good coach, can get his team, who has a legitimate starting 5 and one of the best one-two punches in the conference, to build on the win against Duke, the Eagles could be looking at a winning record at the end of the year.

The new AP poll is out and Duke remains the highest ranked team in the conference at 4th, followed by Miami at 6th, UNC at 7th, and Virginia, Notre Dame and FSU at 16th, 18th and 19th, respectively. Villanova, Michigan State and Wichita State top the poll. Smart money says that Tom Izzo’s Spartans will finish the year with the top spot as they head into a woefully weak Big Ten conference schedule. Sparty has 1 remaining game against the current KenPom top 30. By comparison, Duke, Miami and UNC will each play 9 top 30 teams. Villanova plays 4 while Wichita State plays 5.

Looking ahead to March Madness, the road to San Antonio will go through Boston in the East Regional, and Atlanta in the South. The Tar Heels undoubtedly would prefer the 1 seed in Atlanta while Duke would prefer Boston, but would gladly take either. If both teams are in the running for a top seed, here’s a look at the competition based on the current top 25 poll based on where each team would PREFER to be placed. 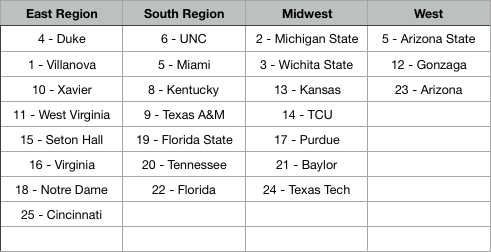 It remains ridiculous that the West even has a regional when it consistently ends up punishing a quality team from the East Coast. Looking at the South Region, this weekend’s games between Virginia Tech/Kentucky and UNC/Tennessee may go a long way in determining which conference owns the top seed in Atlanta.