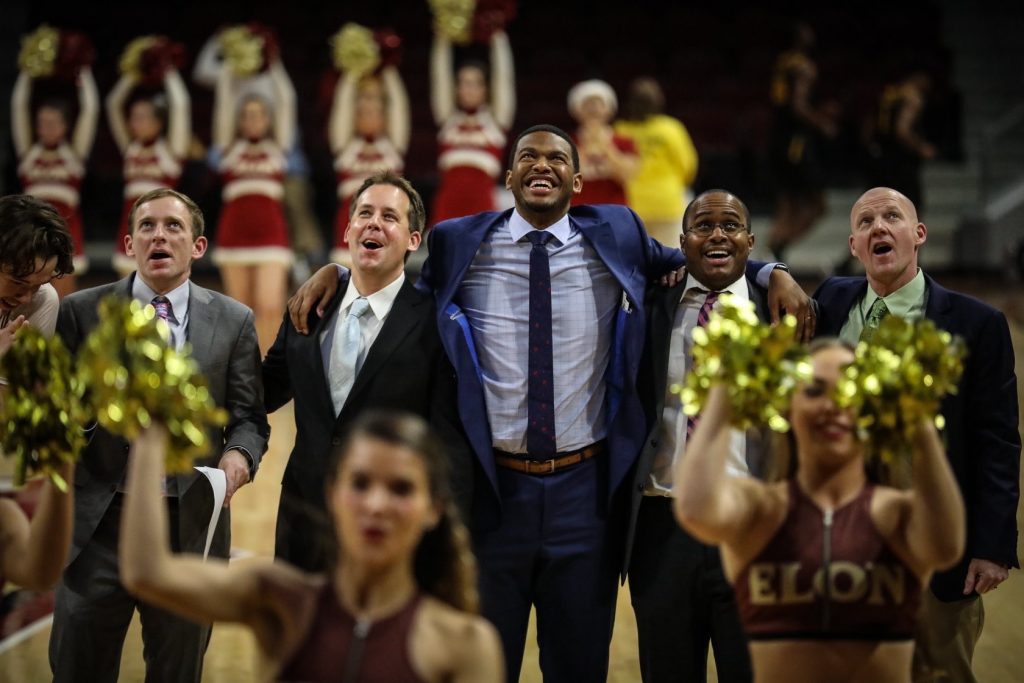 Greetings from the Nation’s Capital (Washington, DC), where the CAA Men’s Basketball Tournament is now underway. There’s a lot to look forward to in the days to come, as this Tournament is taking on a brand new venue and I’m excited to explore every nook and cranny of it.

But for right now, I’d like to just take a quick moment to write about Elon Hoops. Elon will face James Madison tonight around 6:30 p.m. (or approximately 30 minutes after the conclusion of Drexel vs. UNCW). It’s a game that feels like an important opportunity. An opportunity for the Phoenix to announce the arrival of a new era of Elon Basketball under first-year head coach, Mike Schrage.

Elon was picked to finish dead last in the CAA and nobody batted an eye at it. After all, the Phoenix lost several key pieces from a team that was already in the bottom half of the CAA last year (Tyler Seibring, Steven Santa Ana, Sheldon Eberhardt, Nate Priddy, Dainan Swoope). And through the first half of the CAA season, the Phoenix sat at 2-7 in the league, with a last-place finish still very much in play.

So here we are on March 7. Opening Day of the CAA Tournament and the Phoenix did not finish last. In fact, they finished exactly where they did last season: 7-11 and in 7th place in the CAA. The Phoenix put together Elon’s first winning month of February since joining the CAA during the 2014-15 season. This February marked only the second time Elon has posted a winning record in CAA play during any singular month.

It’s a blessing. And it’s a curse. Finishing the regular season with a strong #PhoenixPhebruary proves that Mike Schrage and his guys are well ahead of schedule, but it means that the expectations that come with success are arriving ahead of schedule too. Yesterday, the CAA announced postseason honors that included three Phoenix players. Hunter McIntosh earned CAA Rookie of the Year, Marus Sheffield was the top vote-getter on the CAA’s Second-Team, and Hunter Woods joined McIntosh on the conference’s All-Rookie team.

During the CAA Head Coach’s teleconference earlier this week, Mike Schrage made it clear that he understands the stakes of tonight’s game. He was asked whether he feels like his team can play a little bit “looser” than some of the other teams, knowing that they’ve already outperformed the preseason expectations. His answer was fairly pointed. He feels like he needs this win tonight before there can be any discussion about playing “loose.” He’s right. Win tonight, and you’ve earned your first CAA Tournament victory since 2015 and get a chance to compete against 2-seed William & Mary tomorrow. Lose, and you might as well be in the exact spot you were in last year; losing to the worst team in the conference in the first round of the tournament.

I hope they’ve arrived. It’s an exciting time to be a Phoenix. Do it tonight, boys.